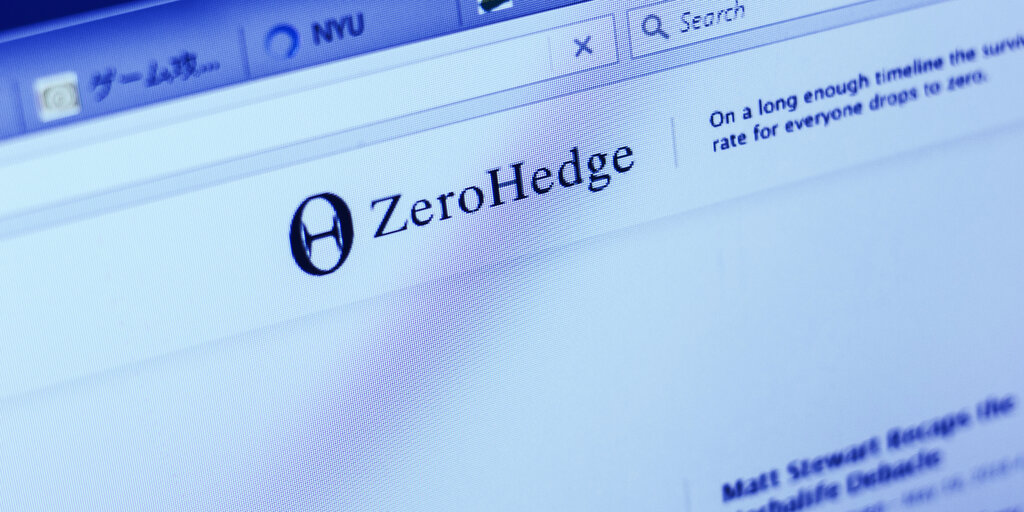 A week after Twitter reinstated its account following a controversial five-month-long ban, the libertarian blog, Zero Hedge, has now been deplatformed by PayPal and Google.

In a post on Thursday, the financial news website, which frequently posts about cryptocurrencies, said that there was a “full blown assault” against it and that it was working on a “premium version of the site which will be independent of outside forces, and ad free.”

The website was responding to Google’s decision this week to ban Zero Hedge from its advertising platform. Google said Monday that content in the comments section of Zero Hedge related to the Black Lives Matter protests violated its policies; it said that the protests were fake.

Zero Hedge, which reports on economic matters, including cryptocurrencies, added that it wanted to “preserve the comments, and the website,” adding: “We are doing everything we can to maintain an open forum.”

The website then said it had been deplatformed by PayPal—and that the donation section was now different. The donations page is now powered by payments website Payolee.

It’s been a tough year for the controversial right-leaning website. In January, Zero Hedge had its Twitter account suspended after Buzzfeed accused the website of doxing a scientist from the Wuhan Institute of Virology. Zero Hedge had hinted at a scientist’s involvement in the COVID-19 outbreak and posted his details online.

But Twitter apologized to Zero Hedge this month, saying it had made an error banning the website from their platform for five months.

Despite Zero Hedge’s controversy, many are standing behind the website on Twitter, arguing that it is another example of big tech trying to muscle in on censorship.

Zero Hedge’s struggles come as the hot debate on censorship rages on. Everyone from President Donald Trump to Messari founder Ryan Selkis has been speaking out about Silicon Valley’s apparent desire to shut certain people and websites up.