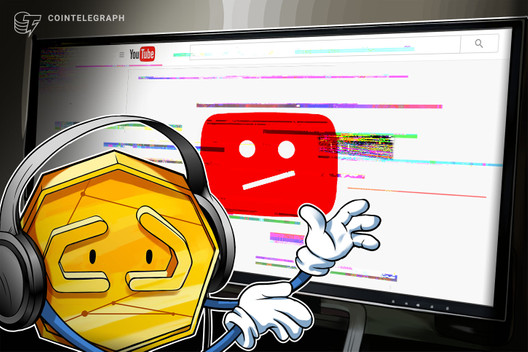 YouTube seems to continue its shadow crackdown on cryptocurrency coverage, as it shuts down the official channel of Roger Ver’s Bitcoin.com.

According to a statement Bitcoin.com executive chairman Roger Ver uploaded to Reddit earlier today, the account was terminated for “basically no reason”. He went on to suggest that it could have been reported by Bitcoin (BTC) maximalists (Verr has been a vocal proponent of Bitcoin Cash (BCH), criticizing Bitcoin for becoming “a store of value”):

“I suspect probably a bunch of these Bitcoin Core anti-competition maximalists falsely reported the video saying ‘It’s a Bit[coin] Cash scam!’ or some nonsense like that.”

Ver added that, regardless of whether the YouTube account will be reinstated, it “seems like the right time to start exploring other options”, namely lbry.tv, Dtube and BitChute. He noted that he still needs to learn more about them, asking the audience to weigh in and suggest viable alternatives.

The Bitcoin.com founder also stressed that there are “tons” of giveaway scams on YouTube featuring fake celebrity endorsement from Elon Musk and others, suggesting that the platform has been inefficient in tackling fraud.

It is currently unclear how many subscribers Bitcoin.com’s YouTube account had at the time it was suspended. According to a cached version of the channel from May 2019, it boasted over 25 thousand subscribers.

YouTube’s unofficial war on crypto has been intensifying as many crypto YouTubers, including Ivan on Tech, Chris Dunn and Tone Vays, have seen their channels suspended or flagged over the last six months.

Cointelegraph reached out to YouTube and Roger Ver for additional comments, but received no reply as of press time. This article will be updated, should a response come in.