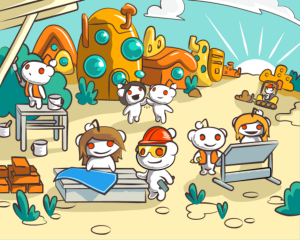 In a significant development, two subreddits with a combined membership of 2.4 million will be utilizing newly launched Reddit community points for their own community tokens. News that Reddit would implement a blockchain points system started circulating in early April.

This announcement by Reddit is an affirmation of the Ethereum blockchain and its potential for adoption.

Ethereum is suitable for a fundamental reason. It is a flexible platform for building decentralized applications and from where tokens can easily be generated enabling community incentivization. The platform has a standard called ERC-20, which facilitates the creation of new tokens.

These tokens have qualities of Ethereum itself, nearly impossible to counterfeit, and owners have full control. There are a number of platforms that have come to replicate Ethereum’s operational model, but Ethereum has better name recognition and trust on account of being the first such platform.

BREAKING: Reddit introduced about 20M new users to cryptocurrency or their own token in a matter of seconds.

Reddit made the announcement in an elaborate slideshow on May 13, 2020. The presentation is entitled “Community points”, and has themes of reclaiming the internet and building independent communities online.

These concepts sound familiar to crypto enthusiasts who are all about liberating themselves from the yoke of centralized monetary systems.

The Community Points system will ensure that members can collaborate on decisions and determine their own futures.

Reddit describes Community Points as a way for Redditors to own a piece of their favorite communities. The tokens connote value and represent a unit of ownership. Users can use them to purchase premium features and double up as a measure of reputation within the subreddits.

Community members earn rewards by submitting quality posts and comments. The community decides how many points each person receives. Emphasis is on quality because these communities are mostly oriented around social news. The most relevant, informative, expert content has to get priority.

Telegram: $1.7B in funding, lots of hype, new chain, no output

Reddit: no funding, no hype, Ethereum-based, roll out a new economic model to millions of users

These points exist on the Ethereum blockchain. Blockchain technology is decentralized, meaning that you have complete control over your Community Points. Neither Redditors nor moderators can take away or decide what to do with the points you earn.

When a Points holder decides to spend their tokens, these Points don’t go to Reddit. Instead, they get “burned”, meaning that everyone else’s slice of Points larger, thus rewarding the entire community.

Members can gift and transfer Community Points to other members. Besides, one can choose to tip another for a great post or comment, just like you would tip a delivery worker for excellent service.

To ensure that your tokens are safe, Vault owners can store an encrypted backup of their private keys on Reddit. However, this is not compulsory and only optional for people with a reasonable belief they might lose their private keys. Alternatively, you can manually protect your Vault by generating a twelve-word Recovery Phrase that you’ll store in a safe place.

MOONS has a fleshed-out inflation schedule. Their supply will decrease by 2.5 percent until the final supply capped at 250 million is reached. R/Fortnite is yet to issue a rollout schedule for BRICKS.

If you are not a member of the respective subreddits, the first step is obviously to sign up on the platform.

Reddit is just like any other social media with a few distinctions. Most subreddits have rules of operation to maintain community standards and ensure the interaction on the platform is relatively civil.

Ensure you familiarize yourself with these subreddits rules to avoid getting in trouble with moderators.

The subreddits have added a new section of Reddit’s mobile app called Vault. Vault is essentially Reddit’s mobile wallet. Members can create a cryptocurrency wallet for the ERC-20 tokens. These tokens double up as Community Points on the platforms. To get your Vault wallet operational, scan a QR code through the official Reddit app.

Create your wallet by visiting the vault page: https://t.co/h0aWjJZ99c pic.twitter.com/L1cd9ghfAu

Once you have a functional Vault wallet, you can contribute quality posts and comments to these platforms to earn Community Points. Like every other cryptocurrency wallet, be extremely careful with the handling of your private keys. Loss of private keys, either through hacking or willful negligence is the equivalent of losing your points.

To earn Community Points, contribute to the subreddits, through posting, commenting, and moderating. The r/cryptocurrency community distributes points monthly and enough points can get you an achievement badge.

You own Community Points pseudonymously meaning that one does not need to use their real name to earn points or participate on Reddit. Community members will ultimately decide on the allocation of tokens. For now, Reddit is working on making the system more transparent so that other users can see your total points balance next to your name.

You can choose to hoard your Community Points and save them up to significant amounts. Alternatively, you can utilize them to access exclusive features such as badges, custom emojis, and GIFs in comments.

Moreover, the Community Points can allow you to get special membership in that Subreddit where you get premium features.

Notably, the Reddit Community Points are still in Beta. This state means that the points are yet to be deployed on Ethereum’s main network (mainnet). They are still on one of Ethereum’s test networks called Rinkeby.

This means that an Ethereum testnet now has more users than the Bitcoin Lightning Network.

At the moment, MOON and BRICK cannot directly represent monetary value, which is a direct exchange for fiat. Reddit plans to migrate the tokens to Ethereum mainnet later in the year, together with user balances.

Ethereum uses “gas” for transactions. Gas is the fee or pricing value you need to complete a transaction or execute a smart contract on the Ethereum blockchain.  Since many Reddit users don’t have gas, Reddit will cover the cost of gas, for now. In due course, Reddit hopes to have a better scaling and gas solution as the system picks up steam.

Reddit experimenting with cryptocurrency could turn out to be huge for Ethereum.  The social media giant has over 400 million users and getting even a fraction of this number utilizing Ethereum is massive.

The two subreddits have an impressive membership, but there are many more that can replicate the “Community Points” system should this first layout prove to be a success. Should this model catch on, there is reason to believe that Ethereum and its tokens will be introduced in Reddit’s entire user base.

Millions of people can get their first introduction to Ethereum and cryptocurrency at large. Adoption has always been a goal of Ethereum founder, Vitalik Buterin. This development could also be bullish for ETH prices, which have for long lagged far behind Bitcoin.

Still, there are a few issues to iron out. For instance, will members with higher Community Points have greater voting rights on the respective subreddits? Such a move is bound to create controversy.

The beauty of this is that the communities will still have a say in implementing the points system. Other Redditors and moderators will be watching such developments closely to know how smooth subsequent roll-outs can be.

To Wrap It Up

In summary, this system can be a lifeline for the Ethereum blockchain. Ethereum needs mass adoption for its potential to be fully realized. The fact that Reddit has hundreds of millions of users bodes well for adoption. It will be interesting to see how this project impacts the network’s fortunes and the value of ETH.

Let us know in the comments below what you think of Reddit’s latest integration with Ethereum Blockchain?