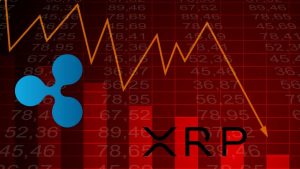 XRP, the transactional digital asset, has crossed below 20 cent mark for the first time since the 2017 bullish run that saw the coin push through the $3 dollar mark. The sharp fall in XRP/USD price comes in a market burdened with heavy bearish sentiments, as technical indicators spell further doom for the third largest cryptocurrency.

In a shocking bloodbath across the crypto market – BTC losing 5%, ETH 8.03% and top coins shedding over 5% in the past 24 hours – XRP/USD recorded the lowest price in two years as price breached the $0.20 USD level to trade at $0.1930 USD as at time of writing.

XRP bears picked up pace in a bleeding market pushing XRP/USD price to an intraday low of $0.18955 USD, representing the lowest XRP has traded since early December 2017. This represents a 95% drop from all-time highs of $3.84 USD achieved in early January 2018.

The Ripple Inc. affiliated token started the year off at $0.35 USD raising to a yearly high of $0.51 USD during the July bull run. However, all turned sour on XRP market in the succeeding months following boosted bear strength on XRPUSD.

The weekly charts show scary signs of XRP closing the first quarter below 11 cents if bulls do not pick up the volume in the coming days. The weekly candle bounced off resistance of the bearish wedge channel signaling a push towards the lower support level at $0.11 USD. Furthermore, the MACD forming a death cross shows an upcoming downtrend in the coming days.

While the outlook in the general market looks set to be terrible for the general cryptocurrency community, XRP bulls look set to enter the new decade on the brink of a 50% collapse. Will bulls be able to hold out this time?