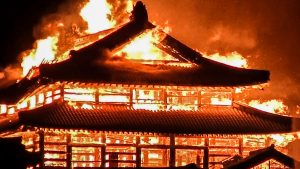 A fire broke out early on 31st October in the far east and destroyed the world heritage site. While no casualties were reported, the wooden castle was burned to ashes.

The United Nations Educational, Scientific and Cultural Organization declared it a World Heritage site in 2000.

Mikiko Shiroma, the mayor of Naha, the capital of Okinawa Prefecture, is reportedly holding talks with the Japenese Central Government to rebuild the monument.

◆Huobi Japan has started one of the first projects that accepts $BTC and $XRP as donations along with other cryptocurrencies to help rebuild the Shuri Castle in Okinawa from the serve fire damage.

How to give here :https://t.co/FHfKnWWEMr

The exchange will provide a receipt of the donations. Hence, it can be used as a tax-deductible by the Japanese tax system. Moreover, Okinawa is reportedly also losing its share of tourists due to its center of attraction being burnt to the ground.

The castle not only held historical importance but also stood as a symbol for the region’s textile industry. The loss in tourism will eventually lead to a loss of their culture as well.

Moreover, the castle was built by handy craftsmen in the past two times. However, the number of skilled workers has decreased due to technological advancements. Hence, rebuilding the castle will be a more significant challenge for the people this time around.

Do you think donations could lead to more financial inclusion of cryptocurrencies? Please share your views with us.