Will LINK Reach a New All-Time High Or Will It Break Down?

The Chainlink (LINK) price is very close to reaching an all-time high. However, technical indicators show considerable weakness, putting doubt in the possibility of a breakout.

The LINK price is currently trading inside a very strong resistance area at 54,000 satoshis, inside which it has formed a triple top pattern. The two previous tops took place in March and April. Furthermore, the price has been following a curved ascending support line since its inception. The line is very close to matching up with the previous resistance area.

Technical indicators are bearish since there are multiple divergences on the weekly RSI. The volume has been declining heavily since the first top. Therefore, it’s more likely that LINK breaks down from the curved support line instead of breaking out above resistance.

If it does break down, then the price could decline all the way to the next major support area at 35,000 satoshis.

In the shorter-term, the price seems to be finishing an A-B-C correction inside the previously mentioned resistance area. There is also bearish divergence on the two most recent tops.

If the price begins moving down, there are minor support areas at 46,000 and 41,000 satoshis, respectively.

The LINK/USD chart shows a relatively similar but not identical movement.

The price has been trading inside a parallel rising channel since June 2019. Similar to the LINK/BTC pair, there are multiple bearish divergences on the weekly RSI, and the volume has been gradually decreasing throughout this entire upward move.

The daily chart shows a similar rising channel. In addition, the price has also made a triple top inside the $2.85 resistance area. Also note the bearish divergence on the daily RSI.

All these signs suggest that LINK will fall. The rate of decline is likely to accelerate once LINK breaks down from the rising channel. 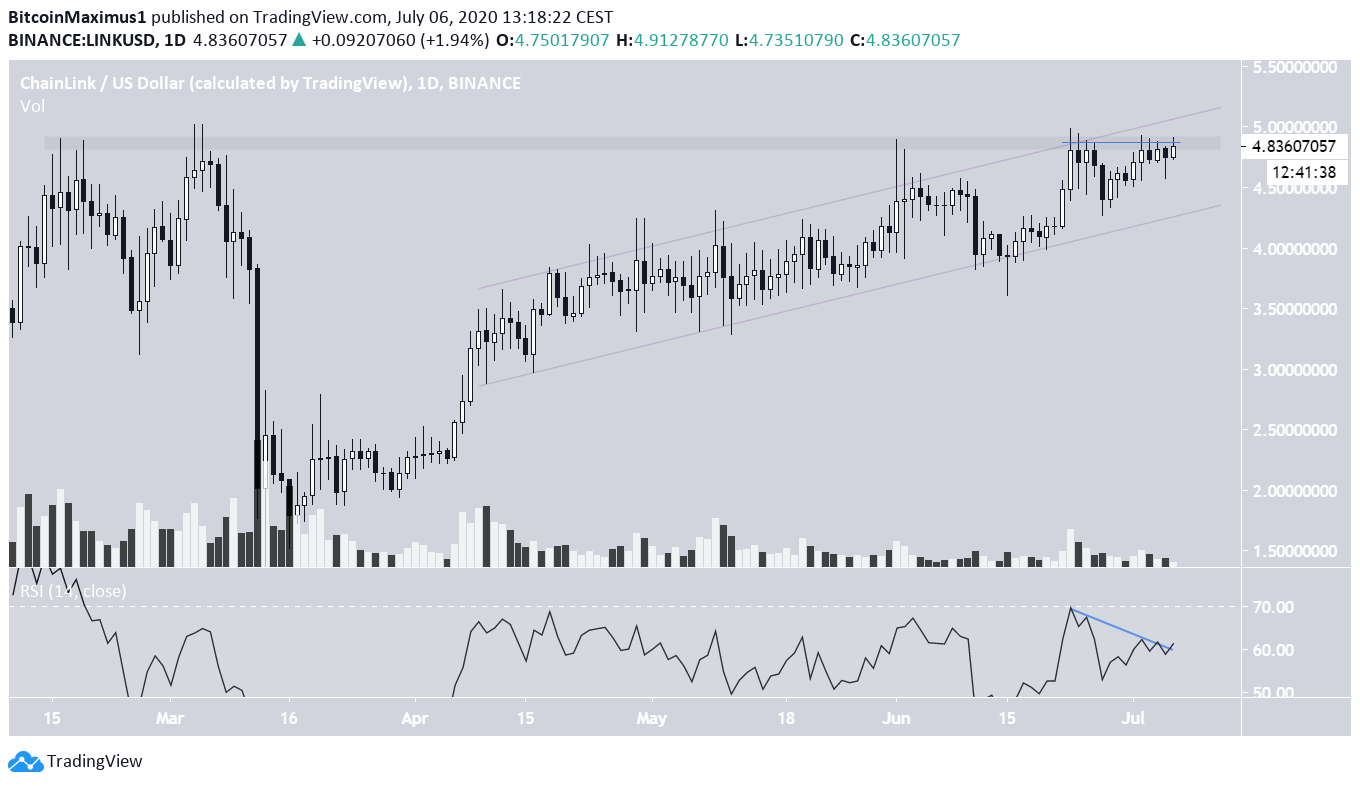 Cryptocurrency trader @Walter_Wyckoff also has a bearish view. He explains that he is entering a short since the RSI has also broken down from an ascending support line.

To conclude, the upward move for LINK seems to be coming to an end for both the BTC & USD pairs and a long corrective period is expected.

The post Will LINK Reach a New All-Time High Or Will It Break Down? appeared first on BeInCrypto.