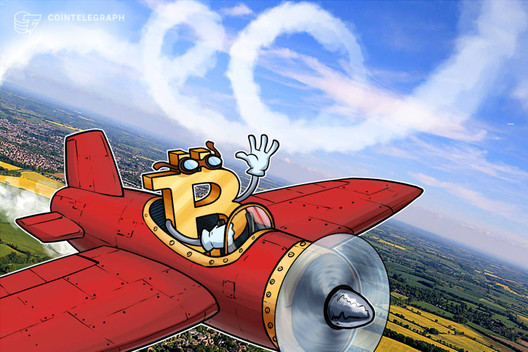 Bitcoin price plunged 31% the last time the U.S. imposed tariffs on China. Will this time be any different?

The trade war between the United States and China began in January 2018. When tariffs were imposed on Chinese goods in July of the same year, the price of Bitcoin (BTC) plunged 31% from $8,487 to $6,000.

Now the U.S. and China are on the verge of reigniting a new trade war as the two nations battle over the origin of the coronavirus. U.S. President Donald Trump recently warned that the signed phase one trade deal “doesn’t feel the same to me,” expressing his intent to walk away from it.

The price of the top-ranked digital asset on CoinMarketCap faces the risk of a major pullback if a full-scale trade war between the two superpowers reemerges due to the decline in institutional appetite and China’s large share of the Tether (USDT) market.

China accounts for a fairly large share of the Bitcoin market

According to a mid-2019 report from Diar, demand for Tether in China exceeded $10 billion by as early as June 2019, accounting for 62% of all on-chain Tether inflow in the second quarter of last year.

Data provided to Diar by blockchain analysis firm Chainalysis highlights the magnitude of Chinese Tether demand with over $16Bn received by exchanges based in that market in 2018. This year the number has already surpassed an outstanding $10Bn, setting the stage for the biggest year yet. 2019 to date flows into exchanges catering primarily for Chinese traders beat the $7Bn of all the transactional value for 2017. 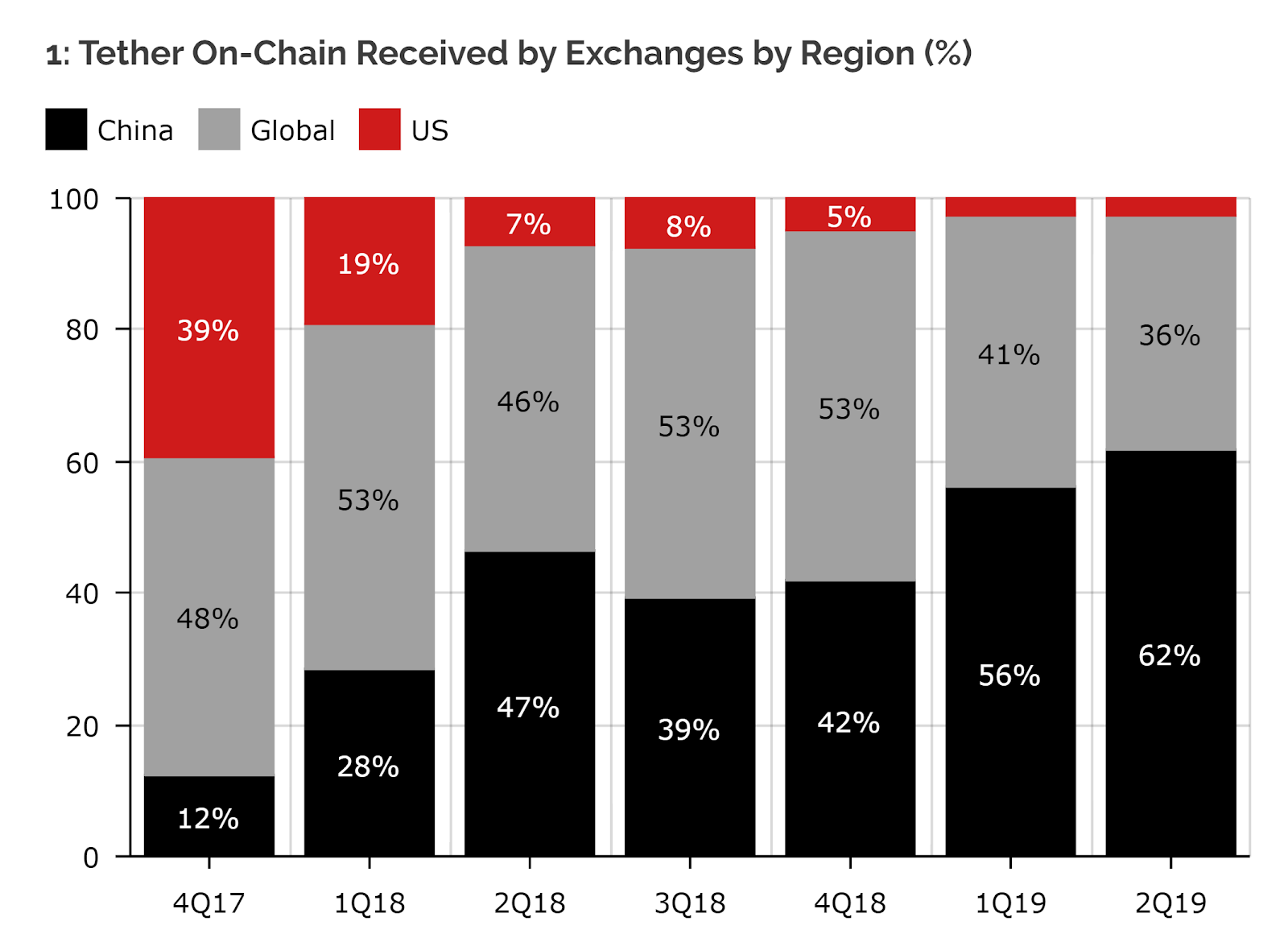 Increasingly looks like China’s story is 1) Huobi and OKEx get some level of approval (‘institutionalization’) 2) Binance and international exchanges mostly iced out 3) Small casino (‘bucket shop’) exchanges like MXC and Biki get shuttered or chased offshore.

Despite a strict prohibition of cryptocurrency trading, Chinese investors make up for a fairly large share of the global Bitcoin market.

If the inflow of capital into China slows down as a result of intensifying pressure from the U.S., it is likely to cause a decline in appetite for high-risk assets including single stocks and Bitcoin. 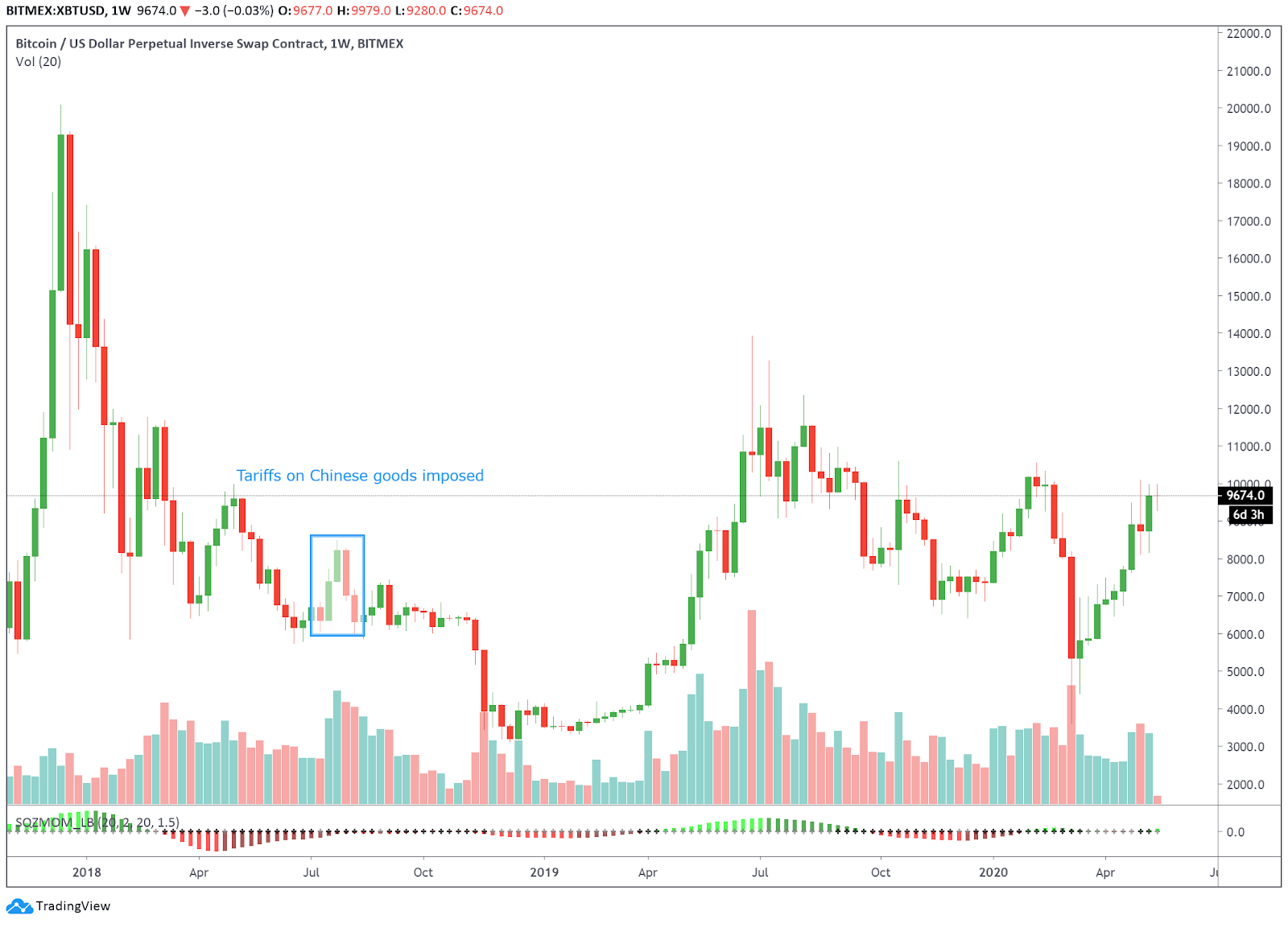 Bitcoin price chart when tariffs were imposed in 2018. Source: Tradingview

A potential fall out of the existing trade deal between the U.S. and China may also lead to declining sentiment around the U.S. stock market.

China is struggling to meet the purchase requirements established in the phase-one deal, and it is projected to miss some of the agreements.

A stock market correction — driven by the unexpected reignition of a U.S.–China trade war at a point where small and medium-size businesses still face a cascade of bankruptcies — can strain institutional investors, causing demand for Bitcoin to drop in tandem.