Why The Chainsmokers are investing in crypto startups 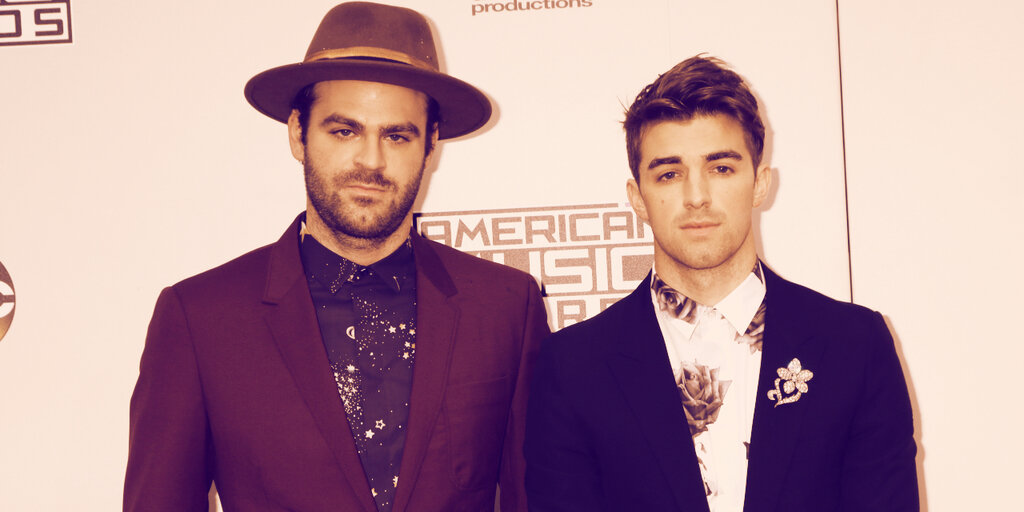 DJ and producing duo The Chainsmokers—Drew Taggart and Adam Pall—are one of the most popular acts in electronic dance music, collaborating with artists such as Coldplay and Halsey on hit singles and being named Forbes’ highest-paid DJs in 2019.

“Mantis is an early stage fund that invests in consumer tech, media/entertainment and fintech/blockchain, and we’re looking to bridge these loosely connected sectors and create synergies within the portfolio,” the firm’s founding partner Milan Koch told Decrypt in an email. The three appeared on a streaming panel discussion today during CoinDesk’s Consensus: Distributed event to explain their goals with the fund.

The Chainsmokers tallied $46 million before taxes in the past year alone, landing them at No. 24 on the Forbes list of highest-paid musicians https://t.co/QTk2eq9DW8 #ForbesUnder30 pic.twitter.com/LrBvygof1w

The Chainsmokers were first introduced to blockchain technology when they co-founded YellowHeart, a company building technology to cut scalpers out of the events ticketing equation. According to Taggart, they saw an opportunity with Mantis VC to help bridge the gap and bring blockchain technology into other industries via investment, connections, and guidance. They had previously invested in at least 20 other companies before this initiative, he said.

“We’ve always been interested in the disruption of businesses,” said Pall during the panel. He suggested that the group has charted new paths with releasing music and touring around it, and wants to share that ethos with startups that Mantis VC invests in. “We really want to be a value-add for those companies,” he said.

Koch explained that Mantis VC seeks to back tech startups in the seed and Series A stages, with a “sweet spot” investment range of $250-500K. Mantis VC has already invested in Casa, the Bitcoin security-centric startup, and while Milan said that he believes that Bitcoin is ready for mass adoption, the applications in the blockchain space “aren’t quite there yet.”

“There’s a huge opportunity for us to find companies that we can invest in,” said Koch. “We want to drive portfolio synergies by investing into loosely-connected sectors.”

Koch added that some of the areas that Mantis VC is most interested in investing into include digital rights management (DRM), micropayments, the pairing of gaming and blockchain, and the use of blockchain tech in emerging markets.

How True Tickets is bringing blockchain to Broadway

Taggart, meanwhile, suggested that they’re looking for startups that use “frontier technologies” but hide them from users; the consumers don’t need to know a thing about blockchain, just that they’re getting a better product.

He also explained how The Chainsmokers worked their way up from playing weeknight DJ sets to tiny crowds into a company that makes hundreds of million in revenue. They consider themselves founders in that sense, and want founders from the companies they invest in to view them that way, as well.

“I want people to feel comfortable that when we invest in them that we understand that experience,” Taggart concluded.

Editor’s note: This article was updated after publication to include comments from Mantic VC.

Source: Decrypt Why The Chainsmokers are investing in crypto startups