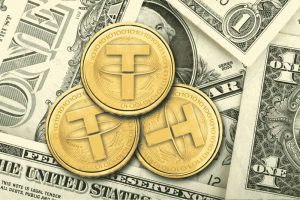 The stablecoin market is exponentially growing and Bitfinex sister company, Tether, currently leads the market with over $8 billion in market capitalization. The recent rapid printing in USDT as “inventory replenishes” has seen the market cap of the stable coin eclipse XRP into third with a total of $8,832,607,783 to XRP’s $8,826,197,105 as of May 15, 2020, 4.05 GMT.

The total USDT market capitalization has doubled since the start of the year as a spree of printing set the total market cap at $8.8 billion, from $4.1 billion on January 5th. One of the fastest-growing platforms on USDT is the Tron network, which currently boasts of over $2.1 billion in USDT on the platform. This represents a sharp rise since March, where it stood at $600 million. Now, Tron based USDT is larger than Omni based USDT.

Despite the rising market capitalization in Tether in the past year or so, there remains skepticism on the platform.

In March 2019, the company revised its terms of service stating the company’s USDT assets are no longer backed on a 1:1 ratio to dollars raising a few eyebrows across the crypto community. Furthermore, the recent market manipulation concerns involving Bitfinex and a loan believed to be in upwards of three-quarters of a billion dollars leaves much to be desired on the stablecoin.

A Ballooning Growth in Tether [USDT] Balances On Exchanges

Additionally, in the past year, the balance of USDT on exchanges has surged in goliath proportions leaving several analysts with doubts on the relative stability in the market.

On May 15, 2019, the balance of USDT on exchanges was at $190 million, exploding to over one billion in barely two months as the price of BTC touched an 11-month high of $13,800 in June 2019. Subsequently, the USDT balance on exchanges diminished in tandem with BTC’s price in the latter part of the year.

However, Tether’s printing machine upped its drudgery in 2020 sending the balances on exchanges to all-time highs. Since mid-February this year, the balance of USDT on exchanges soared over 380% from $422 million on Feb 18 to $2 billion as of May 15, 2020.

“A Failing House of Cards”

Despite the explosive growth in USDT and eclipsing XRP on the market capitalization chart, analysts remain critical of the ballooning printing of USDT and the huge USDT balances currently on exchanges. One analyst said the exchange’s dealings in USDT may raise questions in the future crashing them along.

I still want the DoJ to Liberty-Reserve Tether, it would crash the house of cards and, in the process, kill ransomware.

On the positive, Tether and USDT have proven a useful tool to onboard users to crypto, who would otherwise not get the opportunity to buy and trade using fiat currency.