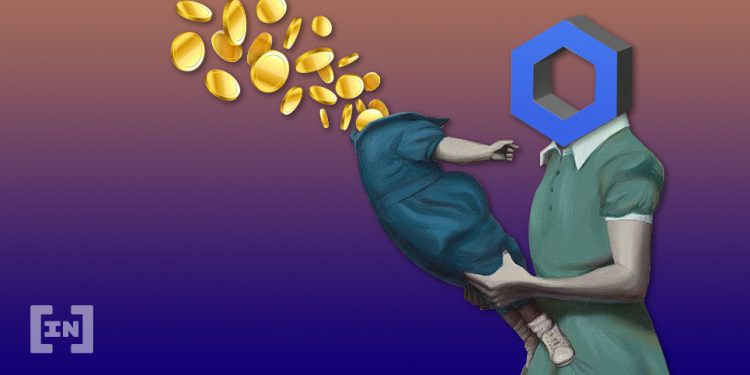 ChainLink appears to have impressed long-standing investment ratings service Weiss. The company’s cryptocurrency-focused division has been relentlessly shilling the project over the last week or so.

Numerous tweets over the last 24-hours dedicated to the digital asset make a case for higher LINK prices.

Investment analysts at the firm have even put out an incredibly bullish price prediction for the decentralized oracle network. But they also neglect to mention any of the project’s potential shortcomings.

Its Crypto division started in 2018. The company somewhat humorously claims that it provides investment advice free from the biases associated with other advisory firms.

It writes in a FAQ that Weiss Crypto Ratings reviews all projects, without accepting compensation from its organizers. It further claims that it’s dedicated to serving its users instead of the companies that it reviews.

Unlike most new cryptos, #Chainlink already has robust and growing adoption by legions of real-world users. This is one of the most important indicators we look for when searching for cryptos to invest in.

However, its recent coverage seems a little lop-sided. In the last eight days, the ratings agency has promoted LINK on Twitter five times out of a total of 11 tweets, all of which have been very bullish.

Another was dedicated to discussion about blockchain and international travel post-COVID-19. A few others championed Bitcoin in a world of rapidly increasing fiat money supply.

Interestingly, Weiss has only singled out Bitcoin and LINK in recent days. In fact, as part of its apparent LINK shill campaign, the agency admitted that:

“the vast majority of the 2,647 cryptocurrencies listed on CoinMarketCap.com trade on nothing but hopes and dreams.”

Of the five pro-LINK tweets, four were posted in the last 24-hours. Perhaps most notable was the inclusion of an actual price prediction for the up-and-comer crypto:

“We reckon #LINK could trade as high as $20. Which is almost five times what it trades for today. Investors would be smart to keep LINK on their radar.”

… But Why so Bullish?

It’s difficult to imagine how Weiss could get any more bullish on ChainLink. The firm explained precisely why it’s optimistic about LINK’s future price performance in a detailed article about the digital asset on June 10.

Investment analysts Bruce Ng and Juan M. Villaverde made the case that demand is set to soar thanks to growing smart contract adoption. They described LINK as a:

“little-known crypto at the sweet spot of the information explosion”

The authors refer to smart contracts as “the future of crypto” and, given that LINK provides a sort of bridge between blockchain platforms and real-world data sources, they expect LINK adoption to grow in tandem with that of Ethereum and other smart contract networks. They write:

“[ChainLink is] the real-word data supplier to smart contracts. And all charges for these services are payable in LINK.”

Ng and Villaverde point to the explosive growth of the DeFi sector in recent years as a driver of smart contract adoption. The applications at the center of the decentralized financial revolution rely on smart contracts. They write:

Weiss identifies several platforms that are expected to not only keep LINK relevant but in high demand. The number of decentralized apps relying on real-world data sources continues to grow.

These include Ethereum, Tezos, Fantom, Solana, Icon, HPB, and Zilliqa. All of them already use or plan to use real-world data via ChainLink.

Arguing along similar lines is Cane Island Alternative Advisors. In a recent report from May this year, the investment advisory firm wrote:

“We view it as the only top-20 token with broad, adaptable business application that is easily explained to an average person: ChainLink is the first successful Blockchain application to interact with the outside world.”

Cane Island also identified that LINK’s price was primarily influenced by two factors: the price performance of ETH and the growth of LINK users.

The firm stated that the applications of LINK are “virtually unlimited” since it provides a bridge between countless real-world industries that could benefit from blockchain adoption and existing blockchain projects like Ethereum.

Given the broad potential applications of ChainLink, Cane Island is expecting LINK user growth to continue. It identified user-growth of about 17% on average each month since June 2018.

The World Economic Forum also recently awarded ChainLink a Technology Pioneer for 2020. A press release on Tuesday stated that the blockchain will work with the Forum to help “define the global agenda on key issues” over the next two years.

The Elephant in the Room?

The ChainLink project has clearly impressed several high-ranking organizations. However, neither Weiss Crypto Ratings, Cane Island, or the World Economic Forum highlight any of the existing shortcomings of smart contract platforms.

Scaling issues aside, there are numerous examples of smart contract vulnerabilities that resulted in investors or users losing capital. The most famous of these, of course, was the Ethereum DAO debacle in 2016.

The security breach actually resulted in a chain split that returned appropriated funds and formed the Ethereum Classic blockchain in the process. There have been several recent examples impacting Ethereum and other smart contract platforms.

BeInCrypto reported in April on a major vulnerability at an Ethereum DeFi project. Hackers made off with around $25 million in cryptocurrencies from Lendf.me, a decentralized lending protocol operated by dForce.

Even more recently, the Bancor project exposed details of a vulnerability that may have resulted in missing funds. Given that smooth-functioning smart contracts seem integral to ChainLink’s success, it seems a little disingenuous of these organizations not to mention a single negative aspect.

Weiss’ suspicious shilling and inclusion of a 5x price prediction even caused some industry observers to question the motives behind the firm’s glowing endorsements.