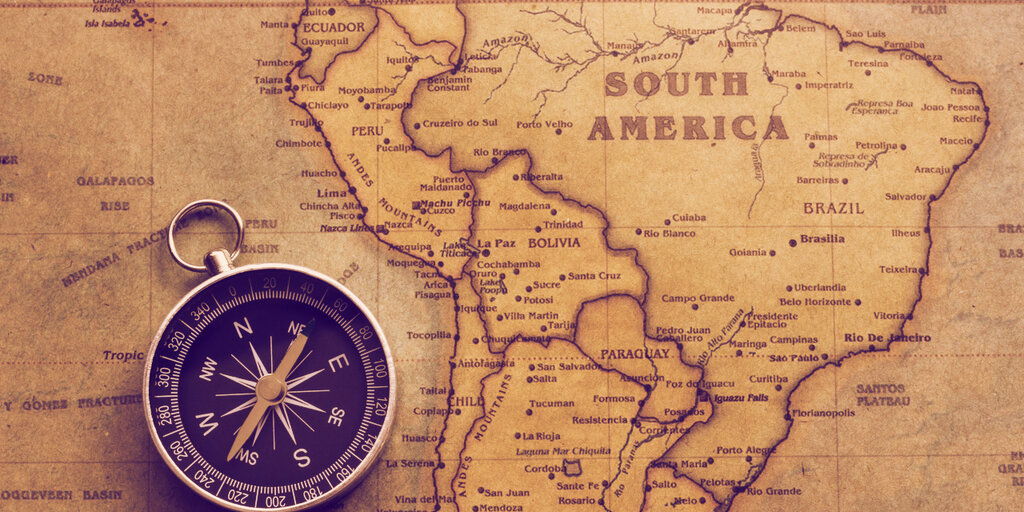 For Navy Admiral Craig Faller, head of US Southern Command, the use of cryptocurrency throughout the “young democracies” of the Southern Hemisphere is a problem for the United States—and he is taking this “threat” very seriously.

“Often, these young democracies—and very young, sometimes weak institutions—are under assault from corruption from transnational criminal organizations—which is a $90 billion a year enterprise [that] traffics in people, guns, drugs and other commodities, money laundering, [and] cryptocurrencies,” said Commander Faller during a talk with the Council of the Americas on Monday.

“Sixty percent of the cryptocurrency in the world is in this hemisphere, and a lot of that is because folks are trying to avoid regular order in the international financial system,” he said.

While data suggests that the biggest cryptocurrency market by volume is actually East Asia, Fuller reiterated the “60% stat” with regard to South America and the Caribbean during his one-hour discussion, and singled out Venezuela as particularly problematic in the region when it comes to crypto.

The admiral explained that the United States government is studying the influence of not only criminal organizations in the region—which includes, in his estimation, the “criminal” government of Venezuelan President Nicolas Maduro—but also that of “external state actors,” such as China, Iran, and Russia (essentially governments whose policies don’t align with the interests of the United States). Fuller further explained that problems in the region stem from “malign actors” such as Cuba, Venezuela, and Nicaragua—governments that often collaborate with those external state actors.

Cuba and Venezuela have notably made greater use of cryptocurrency in recent years as a way to circumvent the “regular order in the international financial system” and evade US sanctions.

To deal with these perceived threats and ensure order in these countries, Faller said that the United States continues to establish alliances with regional governments, such as Colombia, strengthening its education and training program, sharing intelligence, and working toward greater interoperability among military components.

Crypto as a geopolitical issue

When it comes to Venezuela, specifically, Commander Fuller said that US efforts to overthrow Maduro have been effective but may still “take a while.”

“I get often asked, well, why is it taking so long, why hasn’t the US effort worked? And I’d say the US efforts have worked; the international effort has worked, [though] not fast enough for the Venezuelan people. But it took a generation to get to this point, and it’s going to take a while to unpack.”

Indeed, as US Ambassador William Brownfield previously put it, the policy of “accelerating the collapse even if it causes a period of major suffering of months or years” in Venezuela may, in fact, be working. But just as President Donald Trump has stepped up his political game, Maduro has stepped up his own crypto-political game as a result.

For example, Maduro’s government just last week granted a license for a Decentralized Stock Exchange. It is—unlike the state-backed cryptocurrency Petro—completely decentralized and transparent. The new state-backed DEX runs on the Ethereum blockchain and seeks to broaden local investors’ options to exchange traditional financial instruments legally (in Venezuela) with the confidence that the Office of Foreign Asset Control will not intervene.

Likewise, Maduro’s recent “anti-blockade law” aims to promote the use and adoption of cryptocurrencies as state policy nationally and internationally. This broadens the government’s economic vision for escaping sanctions, which until now has been very Petro-centric. What’s more, Maduro has already acknowledged that the Central Bank of Venezuela has Bitcoin and Ethereum as part of its international reserves.

According to data from blockchain research firm Chainalysis, Venezuela ranks third among all nations in terms of cryptocurrency adoption.

While crypto, specifically, was far from Fuller’s focus during his recap of the challenges faced by the US government in South America, the admiral acknowledged that its growing role in the region should not be overlooked.

“It all fits together like the most intricate weave of the most complex Persian rug,” he said.