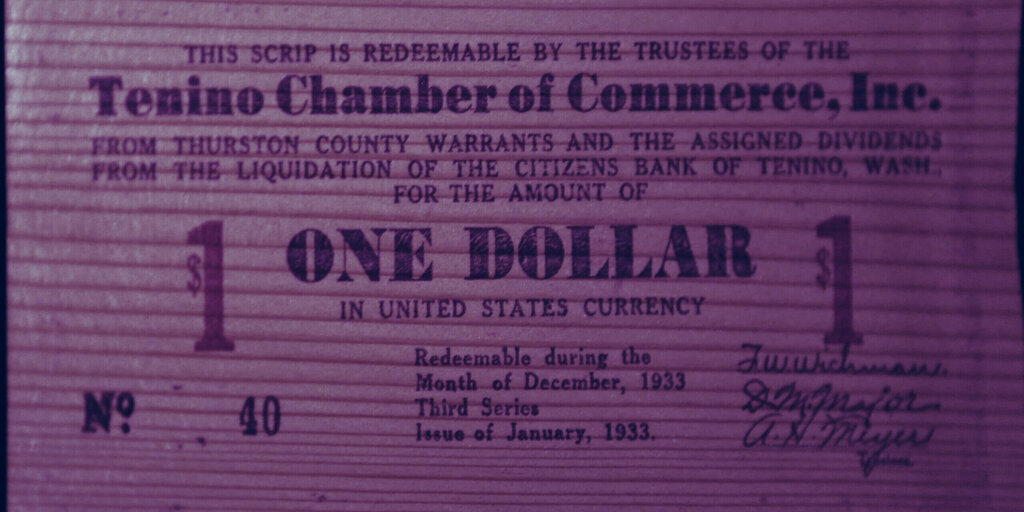 Tenino, a small American city in Washington, has launched its own local dollars—printed on thin sheets of wood—to fight the fallout of the coronavirus pandemic. Although this currency is made out of trees and not digits, it’s a great example of the impact that custom-made “microcurrencies” can have on local economies.

As the lockdown imposed to control the coronavirus began making its impact felt on local businesses, the city of Tenino decided to print $10,000 of local currency that would be allocated to low-income residents, with the caveat that it could only be used at businesses in the local area.

“We were talking about grants for business, microloans, trying to team up with a bunch of different banks,” Tenino mayor Wayne Fournier told The Hustle. “The big concern was, ‘How do we directly help families and individuals? Why not start our own currency?’”

In December 1931, the only bank in Tenino failed. The residents of the small logging town had no currency. Then, a group of prominent businessmen got together and came up with a simple solution: "Let's print our own money!" More from @poseygruener. https://t.co/HP9Bw4yeSs

To get the wooden dollars, Tenino residents who are below the poverty line must first prove that lockdowns have impacted them, although Fournier noted that local authorities are “pretty open to what that means.” After their request is approved, citizens can receive wooden notes—each worth $25, with a monthly cap of $300 in total.

The idea was to create a medium of exchange that would not leave the city and incentivize its residents to spend their notes at local stores. Understandably, the effort aims to help people buy essentials such as food, gas and daycare—so cigarettes, lottery tickets and alcohol are off-limits.

By now, almost every business in Tenino is accepting the wooden dollar. Shop owners and service providers can then submit redemption requests to the city twice a month to redeem the wooden notes for cash.

“The money stays in the city. It doesn’t go out to Walmart and Costco and all those places,” said Joyce Worrell, who runs local antique shop Iron Works Boutiques, adding that the lockdown has proved to be “a catastrophe” for local business owners.

“A lot of the people in our city work for places that hire low-wage help, part-time help, so they’ve been out of work this whole time. This shows that we’re doing something as a community to really step in and help,” she noted.

The idea isn’t new—Tenino first printed its own wooden dollars when the Great Depression hit in 1929, and reportedly helped bring the local economy from the brink of collapse. The same newspaper printer used to print those wooden dollars was dusted off ninety years later, for the 2020 print run.

Tenino is far from the only community that’s created its local money. Back in 2010, for example, a team of active community members in Sardinia launched Sardex—an area-specific currency that aimed to reinvigorate the island’s economy by creating a business-to-business mutual credit system.

Sardex has inspired similar projects since then. As Decrypt reported last October, the government of Wales in the UK announced its plans to launch digital currency Celyn—modeled after the Sardinian experiment.

“The Sardex has been replicated successfully in many parts of Italy, so it’s very exciting to be able to pilot this in Wales. This will be the first replication outside of Italy,” https://t.co/5qZ7PMBlZO

Just like Sardex, Celyn allows businesses to trade without the official currency, the British Pound, using a system of credits that can be reused in the local economy. The developers hope that Celyn could boost the Welsh economy by £250 million over the next ten years. Dr Paolo Dini, R&D consultant on Sardex, is also supporting the Welsh project.

“Wales is similar to Sardinia in that [small and medium enterprises] make up 99 per cent of our businesses, so this has the potential to significantly boost our economy,” said Eifion Williams, CEO of community interest company Circular Economy Wales—which developed Celyn.

Other hyper-local currencies are turning to blockchain. In 2018, Kenya-based non-profit Grassroots Economics launched a digital token, dubbed “Bangla-Pesa,” on the Ethereum-based Bancor Protocol. Residents of Bangladesh could use the token to trade goats, tomatoes and charcoal with one another using a highly localized, blockchain-based digital currency.

Across the world, local communities are responding to economic upheaval with hyper-local currencies—and they’re turning to increasingly sophisticated technology such as blockchain, to bring them to life.