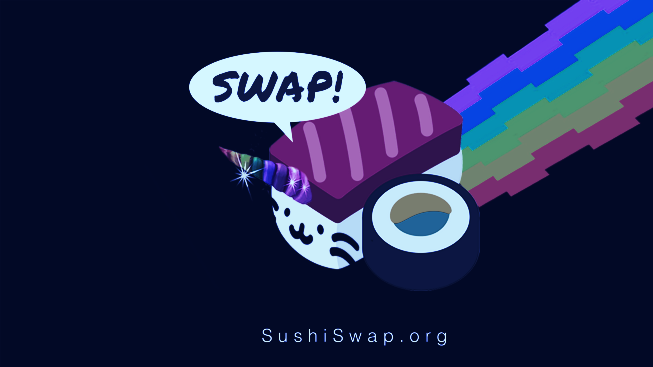 It’s been a record-breaking weekend for Uniswap, which hit its highest daily trading volume ever—over $450m.

Propping up Uniswap’s success this weekend was the crazy prices of DeFi governance tokens—including the token of newcomer Sushiswap, which launched a couple of days ago.

Think of Sushiswap as Uniswap meets yield farming. It’s similar enough: like Uniswap, it’s a liquidity provider that rewards those who put liquidity into its smart contracts with a portion of the  trading fees.

But in addition to that, Sushiswap offers SUSHI tokens as an incentive for contributing to its liquidity pool. In that, it’s a little like DeFi lending protocols, which offer governance tokens as a reward for using them ,like yearn.finance’s YFI, Compound’s COMP or Aave’s LEND. Like these governance tokens, SUSHI can be sold on secondary markets.

It’s created by the pseudonymous Chef Nomi, named after a Hearthstone card. Plus, chefs can cook sushi.

The smart contract’s taken off. There’s $16 million of liquidity for Sushi on Uniswap, where its price is $2.45 and its volume $30 million.

Sushiswap is keen to compete with Uniswap. It’s offering extra SUSHI bonuses to those who migrate their Uniswap LP tokens. “For the first 100000 blocks (~2 weeks), the amount of SUSHI tokens produced will be 10x, resulting in 1000 SUSHI tokens being minted per block,” it wrote.

SUSHI is the latest in a series of food-based meme coins. Before it came Tendies, named after chicken tendies—the rub of a dark 4Chan joke—and YAM, among others. YAM’s founders had to issue a severe apology after a massive bug was found in its smart contracts. That hammered home the need for audits.

Sushiswap is yet to be audited, meaning it could be a very risky investment if things don’t pan out. Chef Nomi, however, is already in the process of arranging audits to prove the legitimacy of his exchange.

9/ We invite @TrailOfBits, @PeckShield, @OpenZeppelin, @Consensys, @Certik_io, and @Quantstamp and to audit the contracts.

First firm to confirm the audit on the official Twitter account will win this job. We promise to pay 5 ETH of our live saving up front for this.