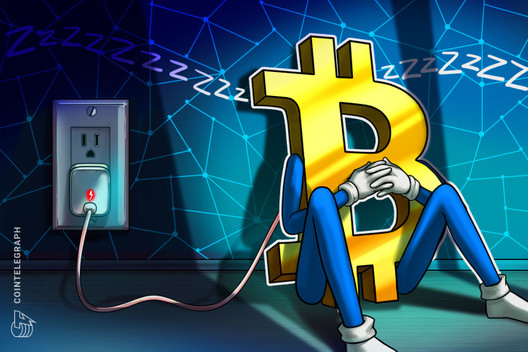 Two Bulgarian nationals have been charged with the theft of nearly $1.5M in electricity used to illegally operate crypto mining farms.

According to an Aug. 14 report from Bulgaria Today, two men have been detained in connection with the theft of $1.5 million in electricity used for mining Bitcoin (BTC) in the small town of Kyustendil.

Representatives from the Oblast Directorate of the Ministry of Interior Affairs (ODMVR) and CEZ Electro Bulgaria spoke at a news conference, stating that the two Bulgarian nationals from Sofia, aged 31 and 38, were caught funneling power to their two illegal crypto mining farms for 3-6 months. However, evidence suggests that the mining equipment had been there for more than a year.

CEZ Deputy Director Philip Yordanov said this was “the largest theft” of electricity the utilities firm had ever discovered. The amount stolen was enough to power the neighboring township for roughly a month.

The two men were detained by police for 24 hours before being released to await trial.

Not unique to Europe

Unscrupulous crypto miners in many countries have attempted to siphon power off the network as more become aware of the profitability of tokens.

One of the largest thefts occurred in China in July 2019, when 22 suspects were arrested after reportedly being involved in an illegal crypto mining farm using $3 million in stolen electricity. Police confiscated 4,000 mining rigs at nine different factories.

Russian authorities have also attempted to crack down on Bitcoin miners stealing power. In June, police arrested a 30-year-old miner accused of stealing nearly $500,000 in electricity from the state power network. Another suspect and his nine alleged accomplices were arrested in March in a similar incident involving the theft of $200,000 in electricity every month to mine crypto.