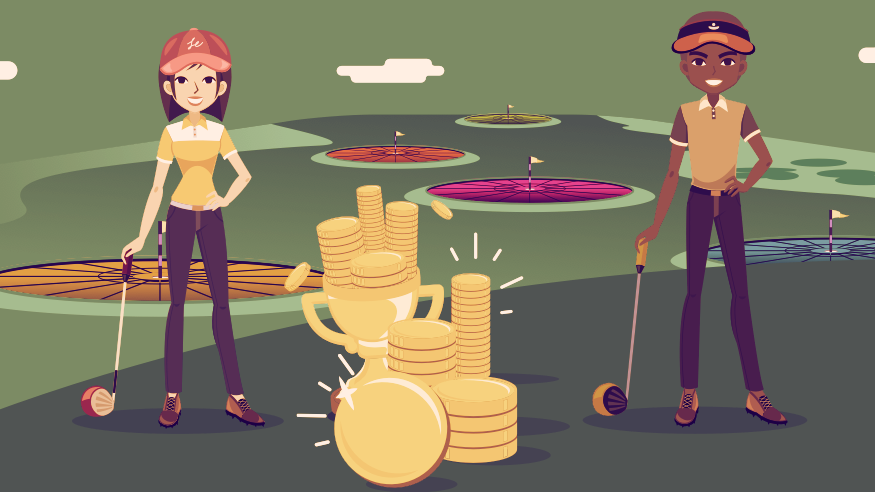 Turner Sports, the WarnerMedia division with roots in television broadcasting and streaming video content, announced today that it has entered the burgeoning blockchain-based gaming space with the launch of Blocklete Golf.

The first in the Blocklete Games series, Blocklete Golf is playable via web browsers and has users compete against each other to swing their digital clubs and land closest to targets in the distant grass.

The blockchain element makes this more than a simple competitive diversion. Players can purchase their own Blocklete digital athlete, which can be leveled up and enhanced as they play the game and earn ability points via skills challenges.

Each Blocklete is an individually-created non-fungible token (NFT) that can also be sold via the game’s open marketplace, letting players potentially profit from the sale of high-value athletes. NFTs are distinct tokens that can’t be replaced or divided.

“Blocklete Games enables players to leverage the blockchain to their advantage, on the heels of a period of tremendous innovation for the industry,” Yang Adija, Vice President of Business Operations and Strategy at Turner Sports, told Decrypt. “One of the most exciting prospects of Blocklete Games creating video games that are accessible and enjoyable at scale, is the potential to give players more ownership over their gaming achievements – something we see as central to an immersive and enjoyable fan experience.”

Blocklete Golf is a rebranded version of Arena Golf from In the Arena Sports, which launched in February. A Turner Sports representative said that the team experimented with the concept and listened closely to player feedback ahead of the rebranding and full launch today, and that further features and initatives are in the works.

Blocklete Games will also run community tournaments with a $20,000 cash prize pool during the first season, which begins later this year. According to a release, Blocklete Golf will accept a variety of coins for Blockletes and digital collectibles, including Bitcoin, Bitcoin Cash, XRP, Ethereum, and “four dollar-pegged stablecoins” that have not yet been identified as of this writing.

Turner Sports is responsible for the traditional sports broadcasts on TV networks such as TNT and TBS, and works with professional leagues such as the National Basketball Association and Major League Baseball. It also manages content for sites such as NBA.com and NCAA.com, and operates the Bleacher Report sports media network and ELEAGUE esports brand.