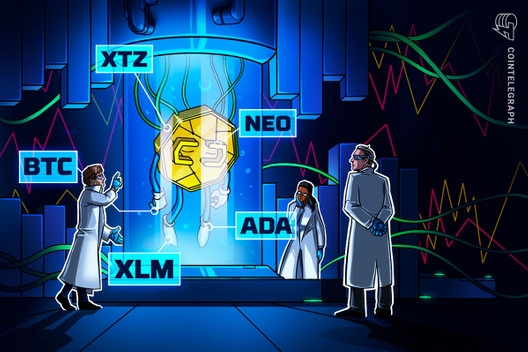 Bitcoin is likely to make a decisive move in the next few days and start a trending move that could remain in force for a few weeks.

Takeshi Fujimaki, a former adviser to George Soros, has said that Paul Tudor Jones is attempting to capture the big trend. According to Fujimaki, Jones’ recent investment into Bitcoin (BTC) indicates that he is concerned about inflation and believes that cryptocurrencies could benefit in such an environment.

Following the recent growth and popularity of Grayscale’s Bitcoin Trust security in the past few months, investment firm Wilshire Phoenix has filed an application with the U.S. Securities and Exchange Commission to launch a publicly traded Bitcoin fund. If the fund gets the green signal it is likely to attract institutional investors.

For the past few weeks the top-ranked cryptocurrency on CoinMarketCap has been struggling to break out of the $10,000–$10,500 resistance zone. This can attract profit booking by short-term bulls and shorting by aggressive bears. If BTC weakens further it is likely to have a knock on effect on altcoins but this could also bring about some lucrative investment opportunities. Let’s look at a few cryptocurrencies that may offer trading opportunities to bulls and bears.

Bitcoin (BTC) is witnessing a tussle between the bulls and the bears. The bulls are attempting to scale the price above the $10,000–$10,500 overhead resistance zone in order to resume the up move. On the other hand, the bears are trying to form a short-term top at the $10,000 levels. 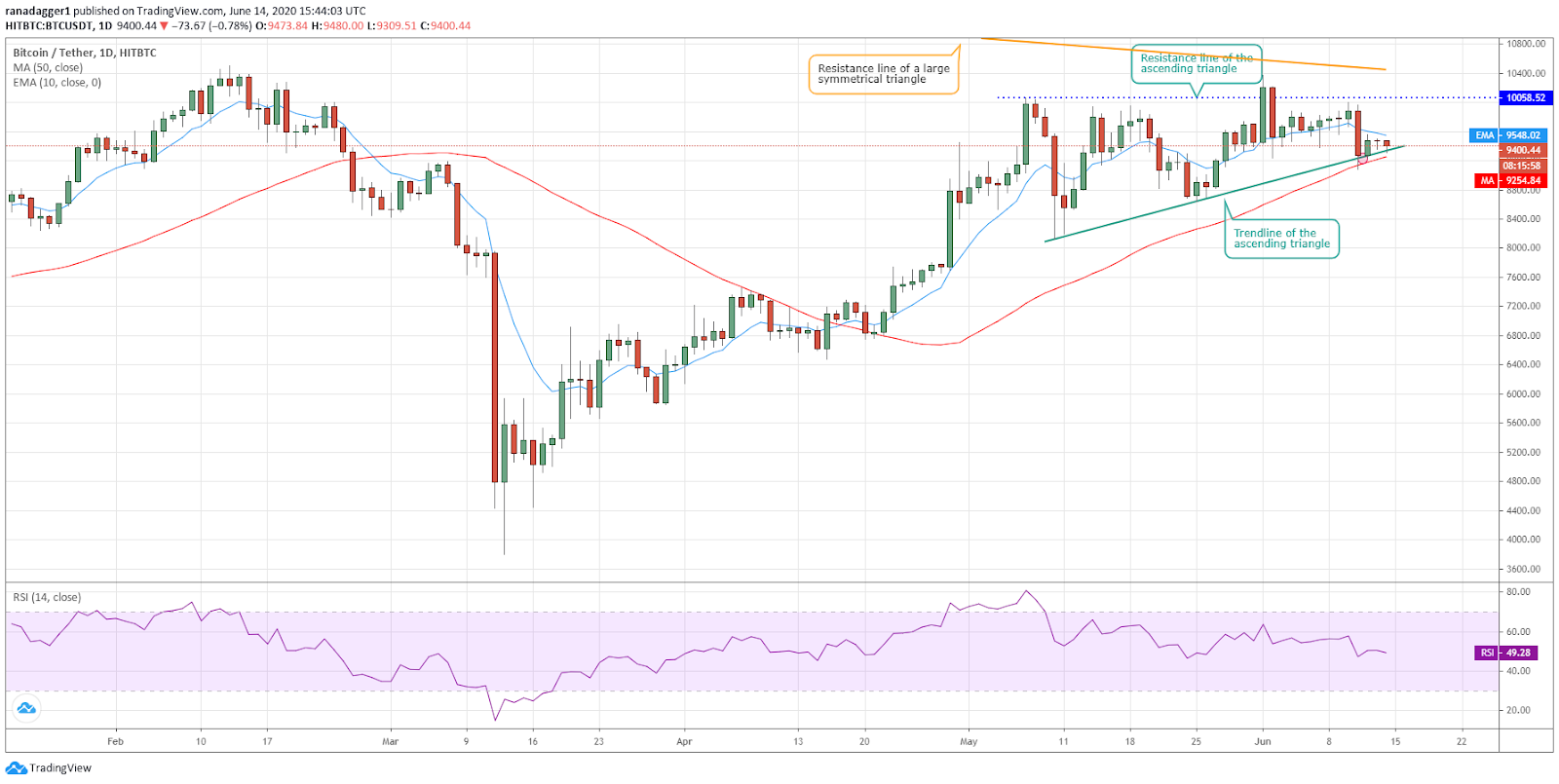 The BTC/USD pair turned down from the critical level of $10,000 on June 10 and slumped to the 50-day simple moving average ($9,254) on June 11. Hence, traders should watch these two levels carefully because the next trending move is likely to start after the price breaks out of either level.

Conversely, if the bears sink and sustain the price below the 50-day SMA a deeper correction to $8,638.70 and then to $8,130.58 is likely. A break below this support could attract further selling and result in a downtrend.

Currently, as the 50-day SMA is still sloping up, the intermediate trend favors the bulls while the short-term trend has turned indecisive as seen from the up and down movement of the 10-day EMA. 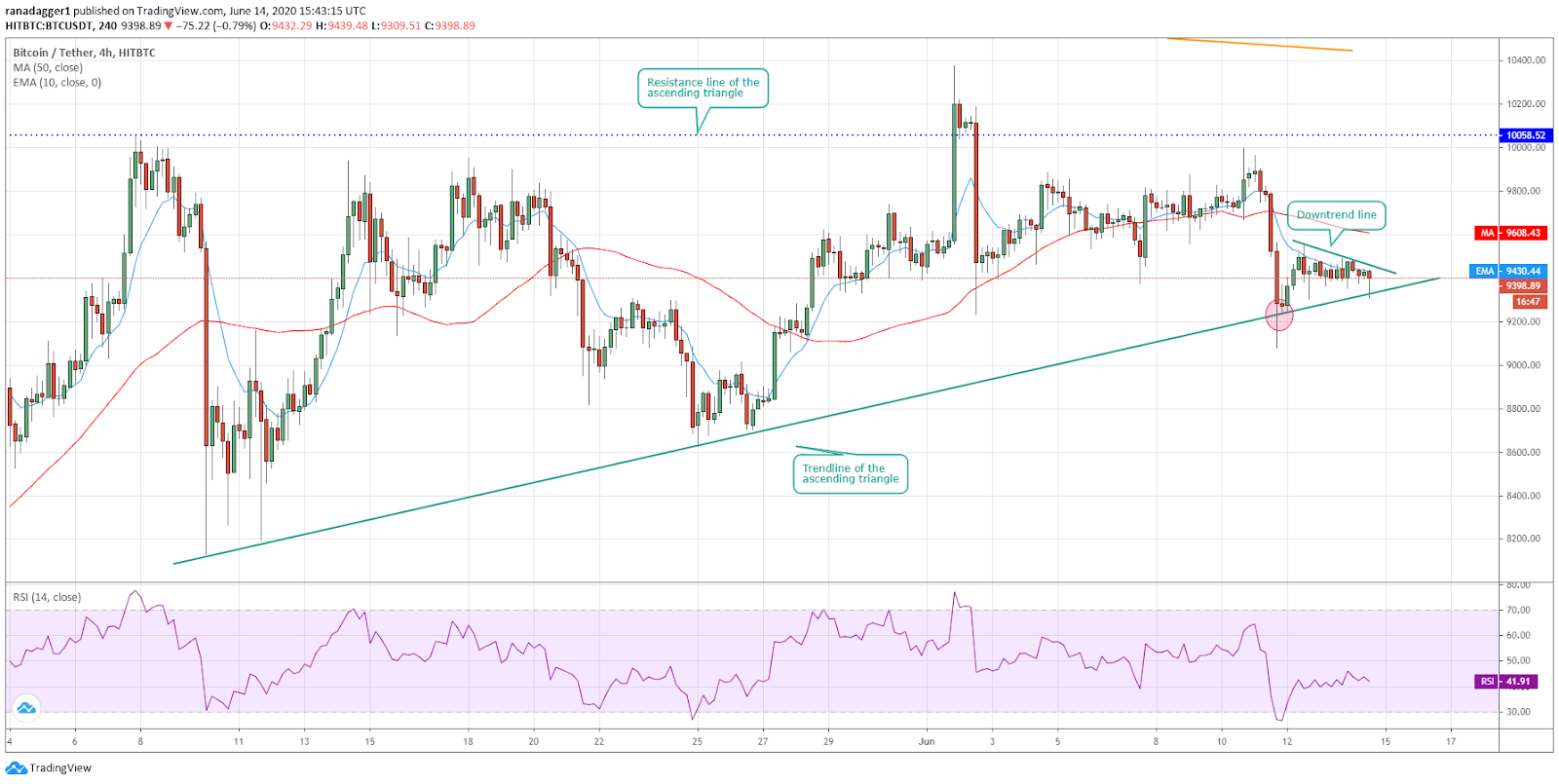 The bulls purchased the dip below the trendline (shown via ellipse on the chart) but they are finding it difficult to sustain the rebound. This suggests selling on any pullback by the bears.

In the short-term, the downtrend line is acting as a resistance. If the pair breaks above the downtrend line, the bulls might make one more attempt to carry the price to $10,058.52. This move could present a trading opportunity to the aggressive traders.

Conversely, if the price turns down and breaks down of the trendline, it will signal an advantage to the bears. If the price sustains below the trendline the bears will make another attempt to sink the pair below $9,078.96. If this is successful then a new downtrend is possible.

Tezos (XTZ) had been trading in an ascending channel for the past few weeks. However, on June 11, the altcoin plunged below the channel, which is a huge negative. The large red candle shows that bears were in command. 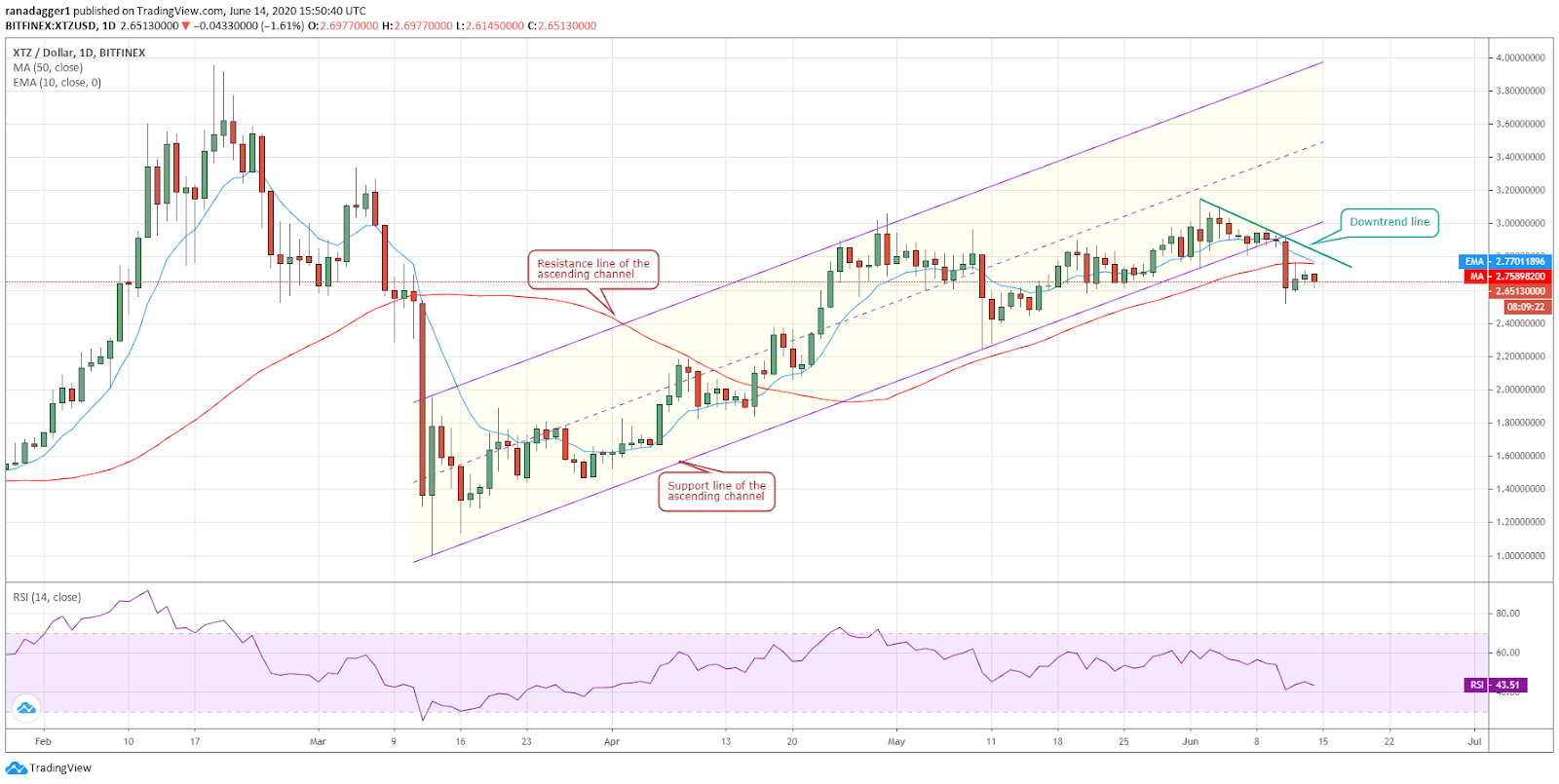 With this breakdown, the 11th-ranked cryptocurrency on CoinMarketCap also slipped below the 50-day SMA ($2.75). Both moving averages are on the verge of a bearish crossover and the RSI is in the negative territory, which suggests that bears have the upper hand.

If bears sink the price below the $2.5202 intraday low formed on June 11, a downtrend is likely to begin. The next support on the downside is $2.24, which was the intraday low made on May 10.

This bearish view will be invalidated if the bulls reverse direction and push the price back above the downtrend line. In such a case, the trend might turn range-bound in the near-term. 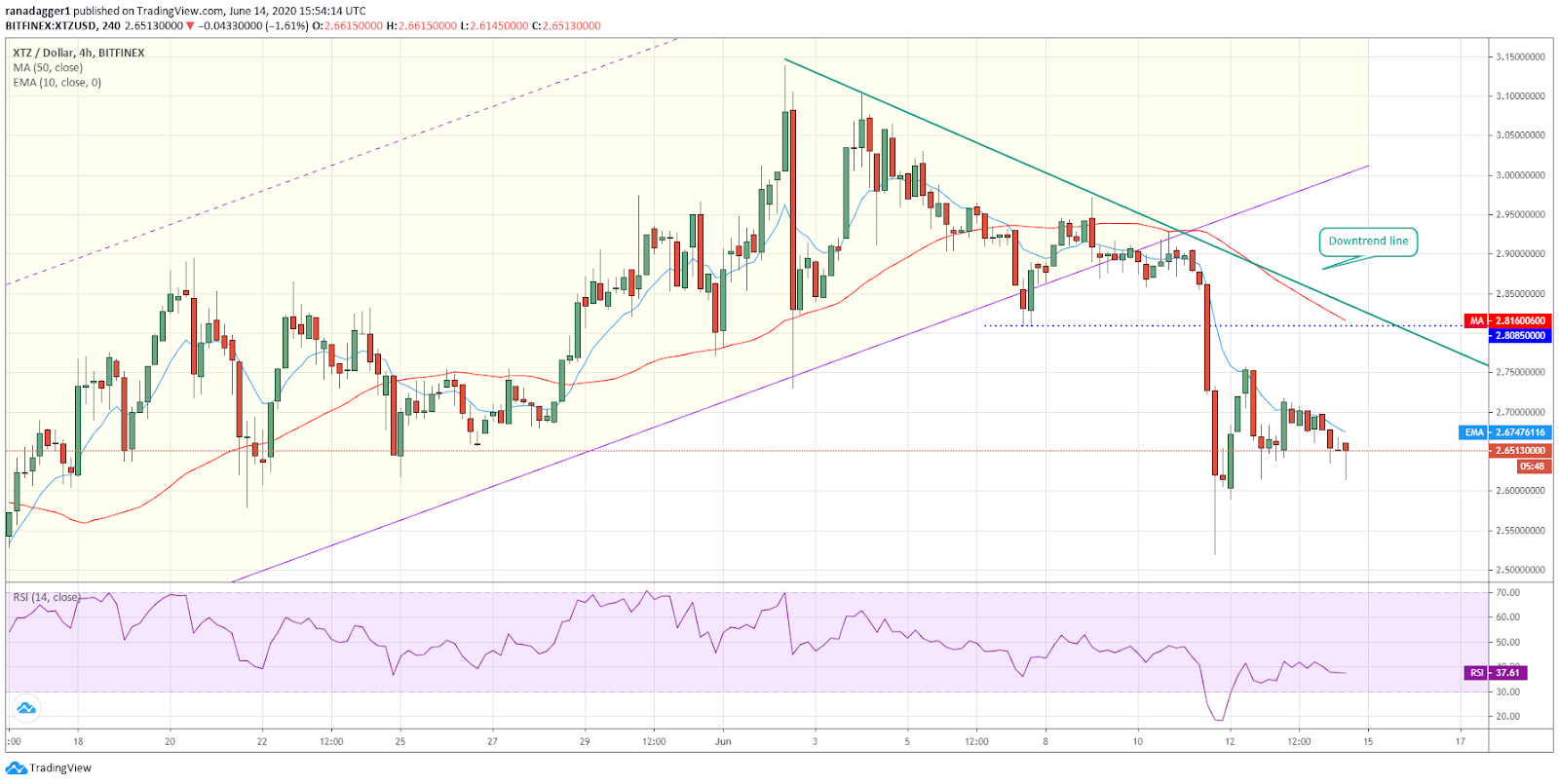 The four-hour chart shows that the selling picked up momentum after the price slipped below the channel and further intensified on a break below the horizontal support at $2.8085.

On the pullback from the lows, the bears aggressively defended the 10-EMA, which is another bearish sign. If the bears can sink the price below $2.5202, the XTZ/USD pair is likely to pick up momentum on the downside. This could offer a shorting opportunity to aggressive traders.

However, if the bulls defend the $2.589–$2.5202 zone aggressively, the pair might rise to $2.70 and then to $2.7568 and remain range-bound for a few days. The bearish view will be invalidated if the bulls propel the price above the downtrend line.

Stellar Lumens (XLM) plummeted below the support line of the ascending channel and the 50-day SMA ($0.071) on June 11. While this is a negative sign, the bears have not been able to build upon this breakdown. 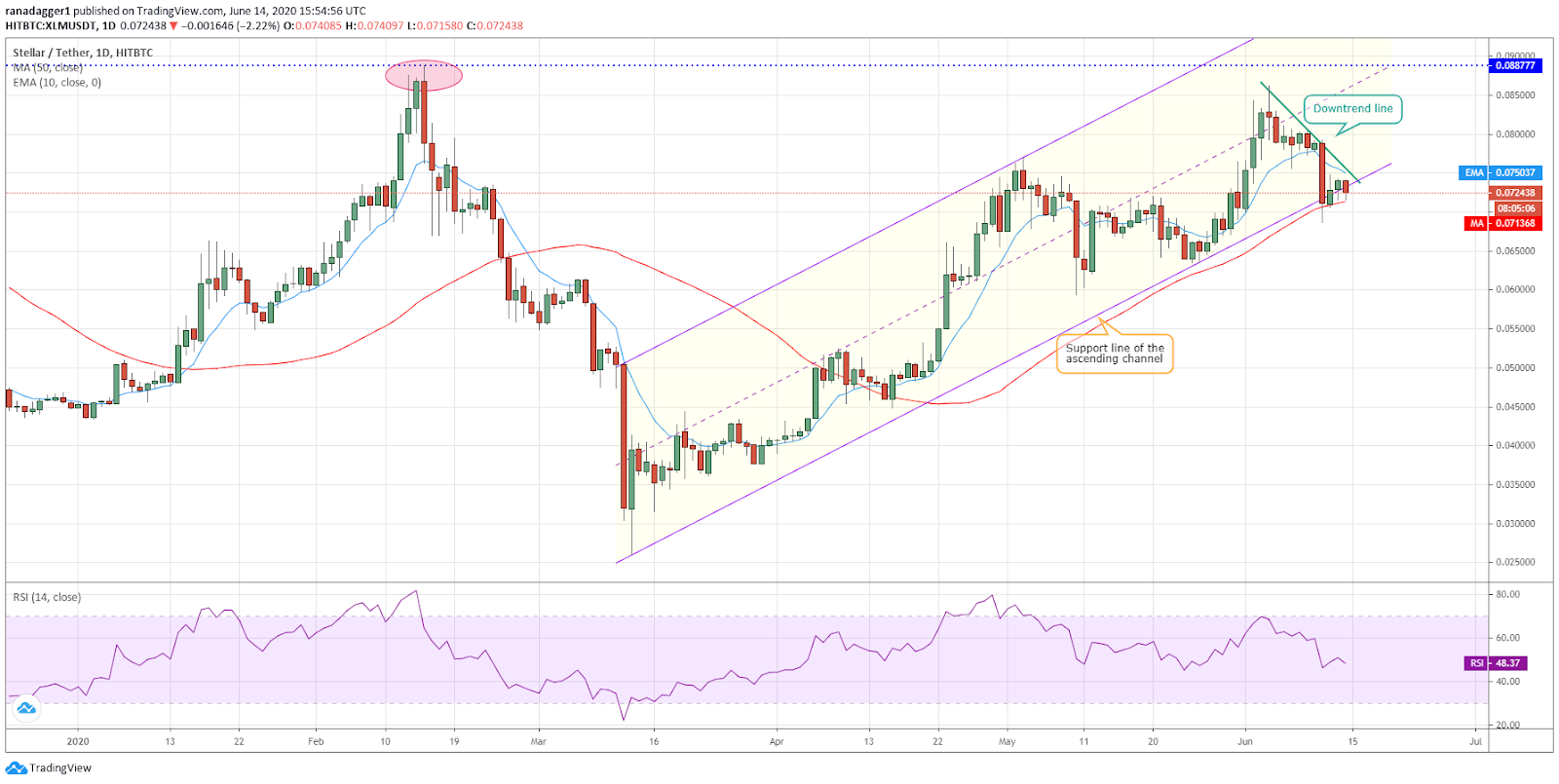 This suggests that bulls are buying on dips and are trying to keep the 13th-ranked cryptocurrency on CoinMarketCap inside the channel. However, the bears are not allowing the bulls to have it easy as they are attempting to stall the recovery and start a new downtrend.

Conversely, if the bulls can carry the price above the downtrend line, a rally to $0.079319 and then to $0.086277 is likely. The altcoin can go either way and offer trading opportunities to both bulls and bears. 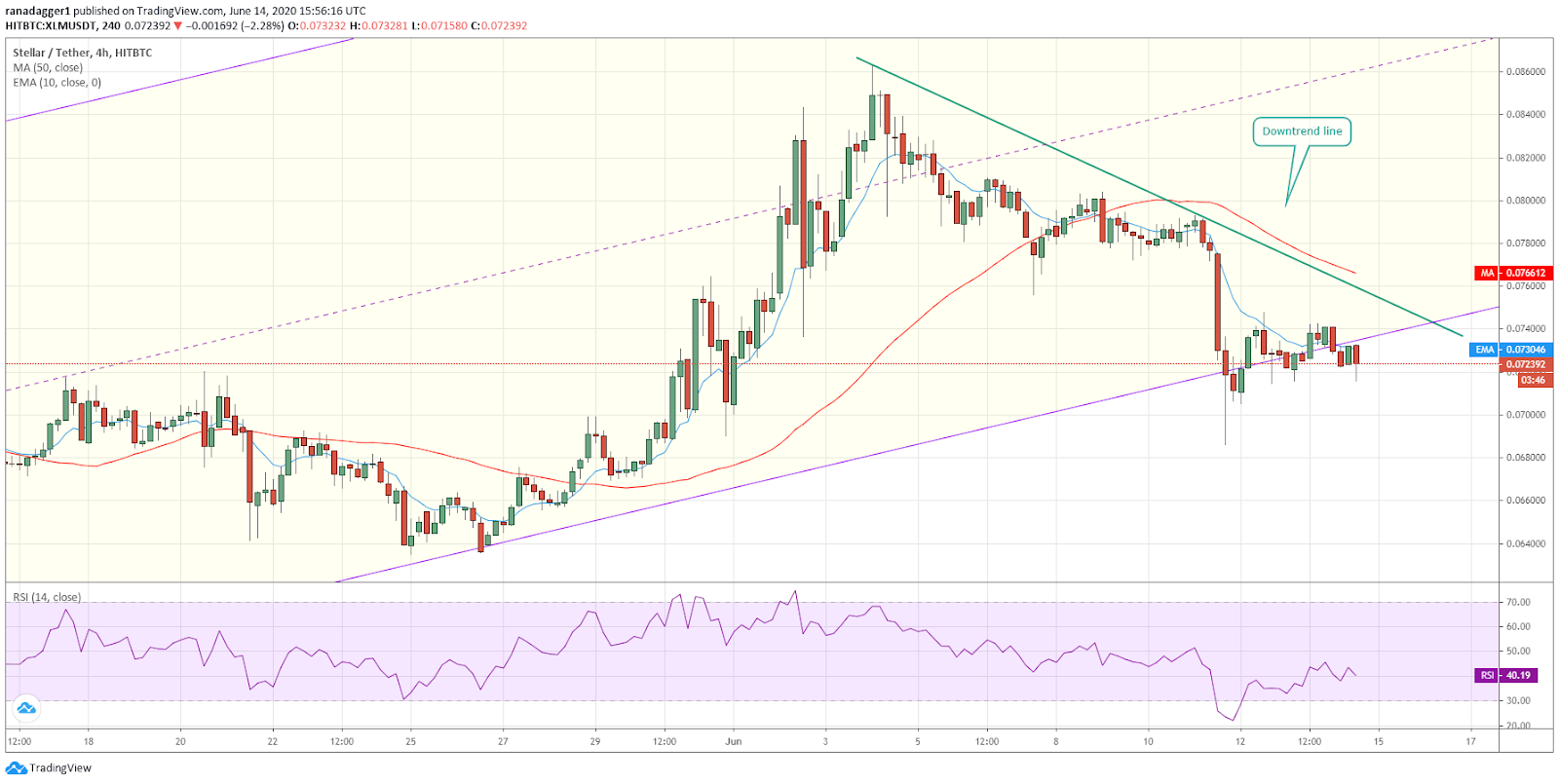 The bears are aggressively defending the resistance at $0.074. If the XLM/USD pair continues lower and breaks below $0.068607, it is likely to attract further selling. This could offer a shorting opportunity to the aggressive traders.

As the pair can move either way, traders should be careful with the first breakout or breakdown because the possibilities of a bull trap or a bear trap are high. It is better to wait for the breakout to sustain before initiating any trades.

Cardano (ADA) is currently witnessing a pullback in an uptrend. The 50-day SMA ($0.061) is sloping up, which suggests that the intermediate trend is up. However, the short-term has turned negative as seen from the downsloping 10-day EMA ($0.079). 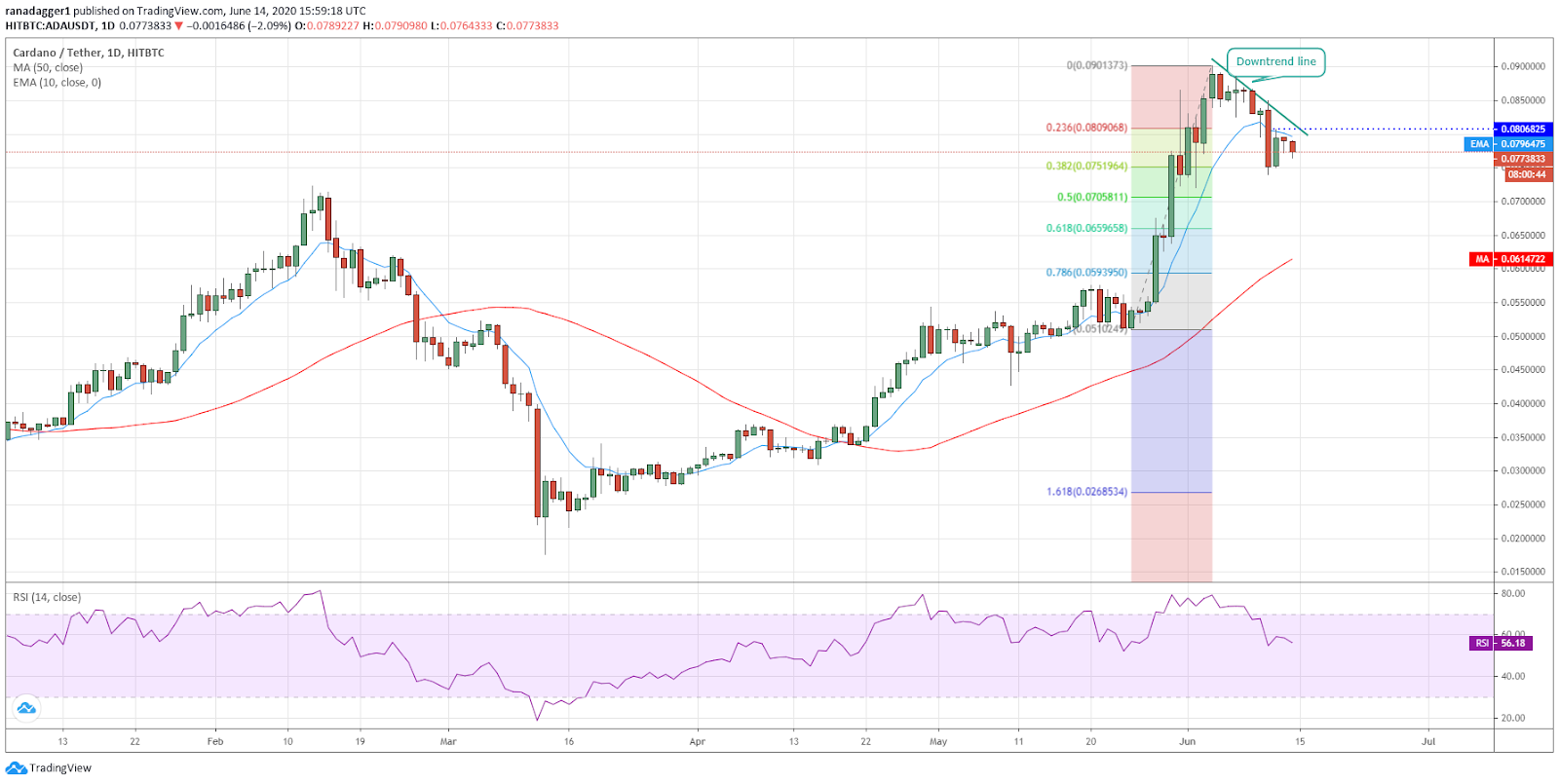 The pullback is a healthy sign because it has helped the 10th-ranked cryptocurrency on CoinMarketCap correct the huge overbought levels on the RSI.

Currently, the bulls are attempting to provide support at the 38.2% Fibonacci retracement level of $0.0751964. If the rebound off this support can sustain above $0.0806825, it will increase the likelihood of a retest of $0.0901373 and if this level is scaled, the uptrend could resume. 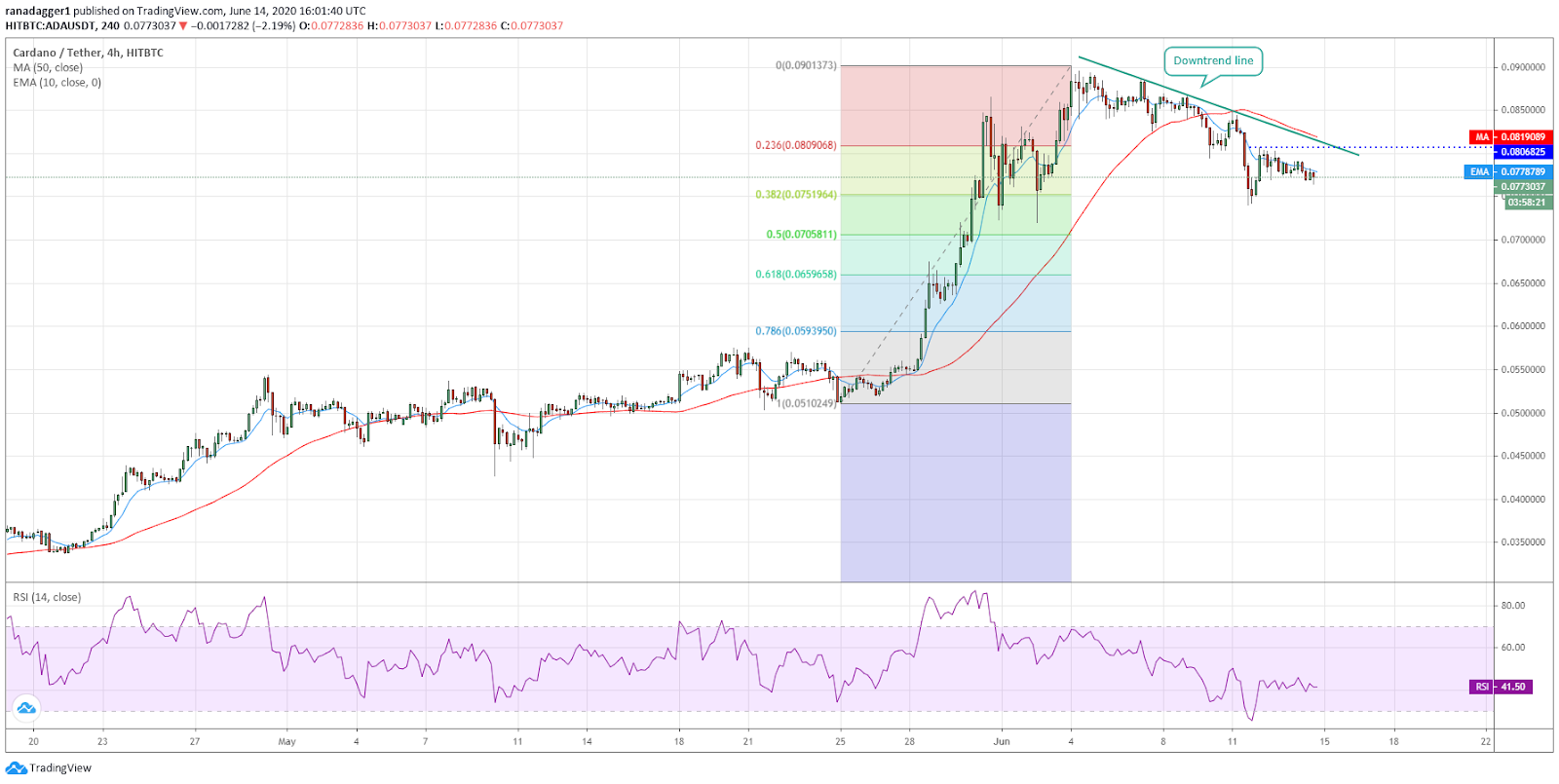 Both moving averages on the four-hour chart are sloping down and the RSI is in the negative zone, which suggests that bears have the upper hand.

If the ADA/USD pair rebounds off the $0.0740–$0.0720 support zone, the bulls will attempt to push the price above the downtrend line. A breakout of $0.0806825 can open up trading opportunities to the upside.

This bullish view will be invalidated if the pair sinks below the support zone. Such a move will indicate that bears have a firm grip. In such a case, long positions can be avoided. 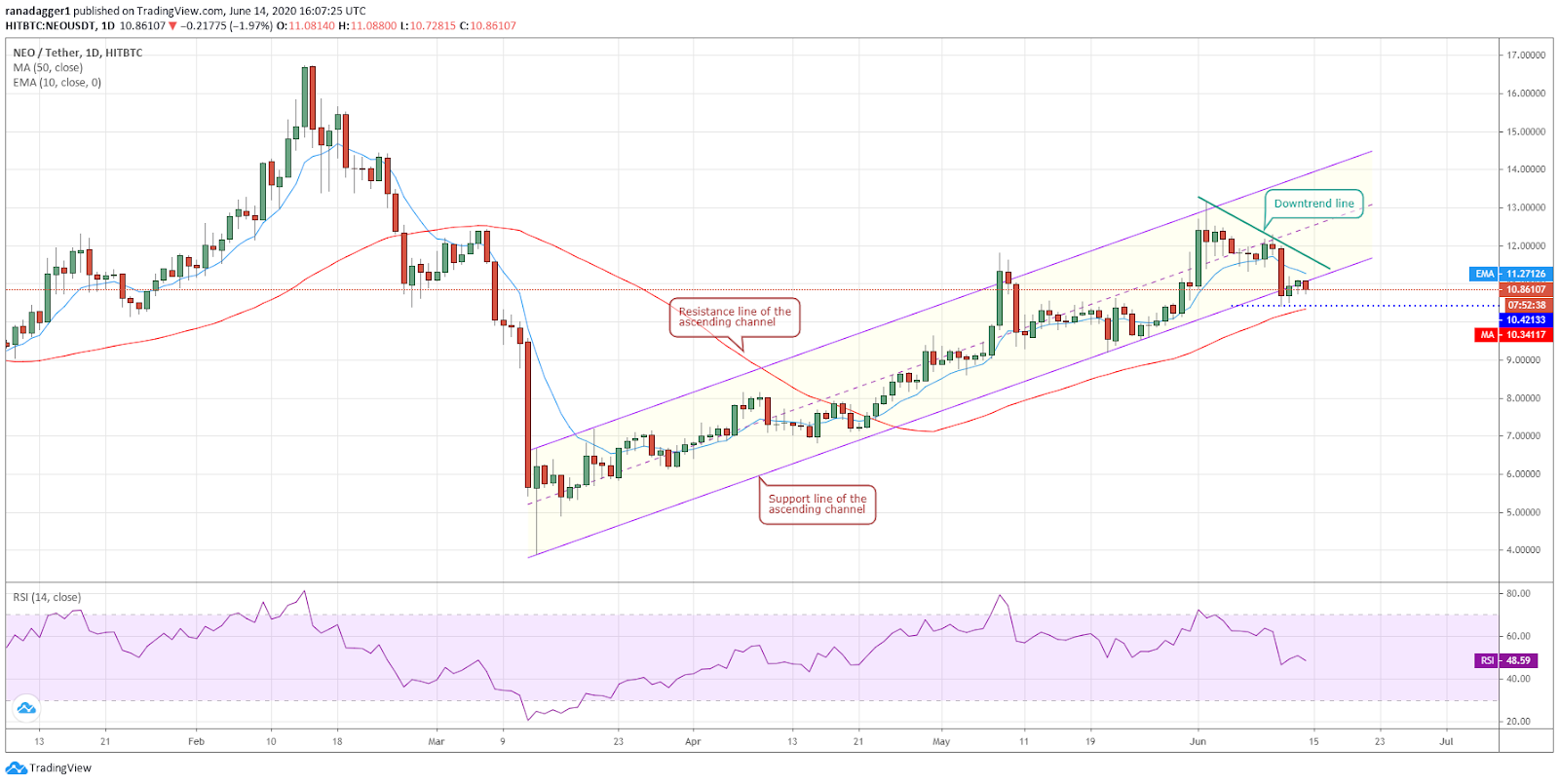 Even though the bulls purchased the dips on June 10, the subsequent rebound has been weak. This suggests that buying dries up at higher levels. Another negative sign is that the bulls are struggling to keep the price inside the channel.

Conversely, if the bulls can push the price back above the 10-day EMA ($11.27) and the downtrend line, it will suggest aggressive buying by the bulls at lower levels. This will increase the possibility of a rally to $12.2839 and then to $12.1711. 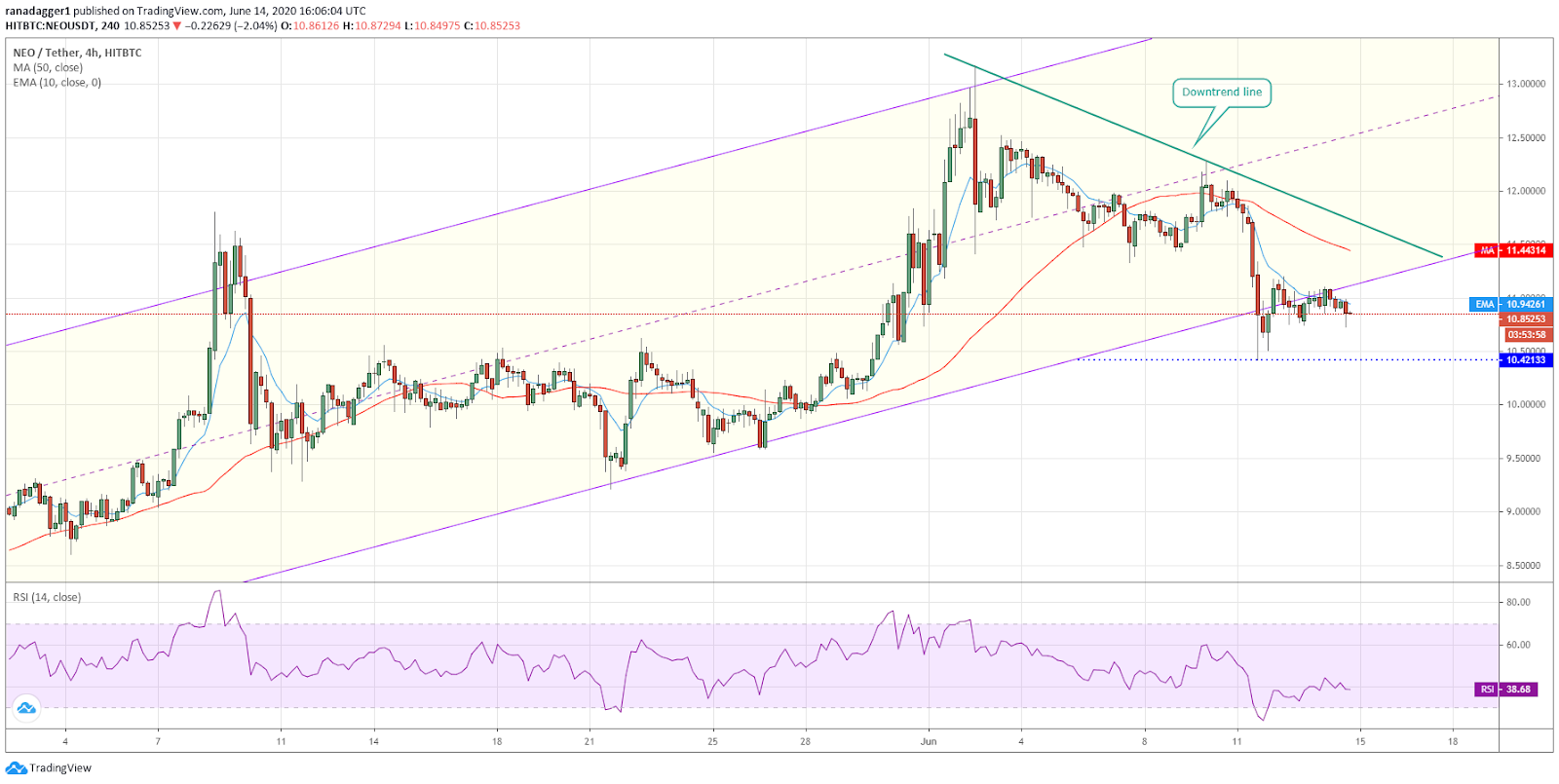 The four-hour chart shows that bulls are struggling to keep the price inside the ascending channel. This is a negative sign as this indicates selling on rallies.

If the NEO/USD pair breaks below $10.42133, it could open up the gates for further downsides to $9.58498 and then to $9.21399. Traders may attempt to ride this move lower using short positions. The 50-SMA is sloping down and the RSI is in the negative zone, indicating that bears have the upper hand.

The market data is provided by the HitBTC exchange.