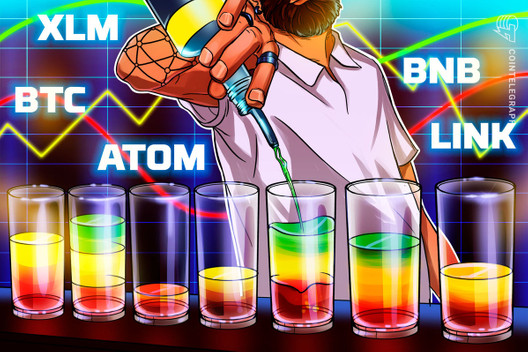 The rally in altcoins is likely to continue if Bitcoin holds at its current levels but a breakdown below $9,000 could lead to aggressive profit booking by altcoin traders.

At various points throughout 2020 Bitcoin (BTC) was correlated with gold. During these phases BTC was acting as an uncorrelated asset, but now it has become highly correlated to the S&P 500.

This suggests that the top-ranked cryptocurrency on CoinMarketCap has been finding acceptance among various groups of traditional investors during different stages of the current coronavirus pandemic induced economic crisis.

Bitcoin’s volatility has dropped in the past few days but select altcoins have been rallying sharply, prompting analysts to predict that a new altcoin season has arrived.

If Bitcoin shakes out from its slumber and rallies higher, it is likely to be a positive sign and several altcoins may continue to outperform BTC. However, if the volatility expands to the downside, it could result in profit booking in several altcoins. Therefore, traders should keep a close watch on Bitcoin’s price.

Bitcoin’s (BTC) volatility has dropped sharply as it has been trading inside the $8,900–$9,500 range since June 25. This volatility squeeze is likely to end soon with a sharp breakout in either direction. 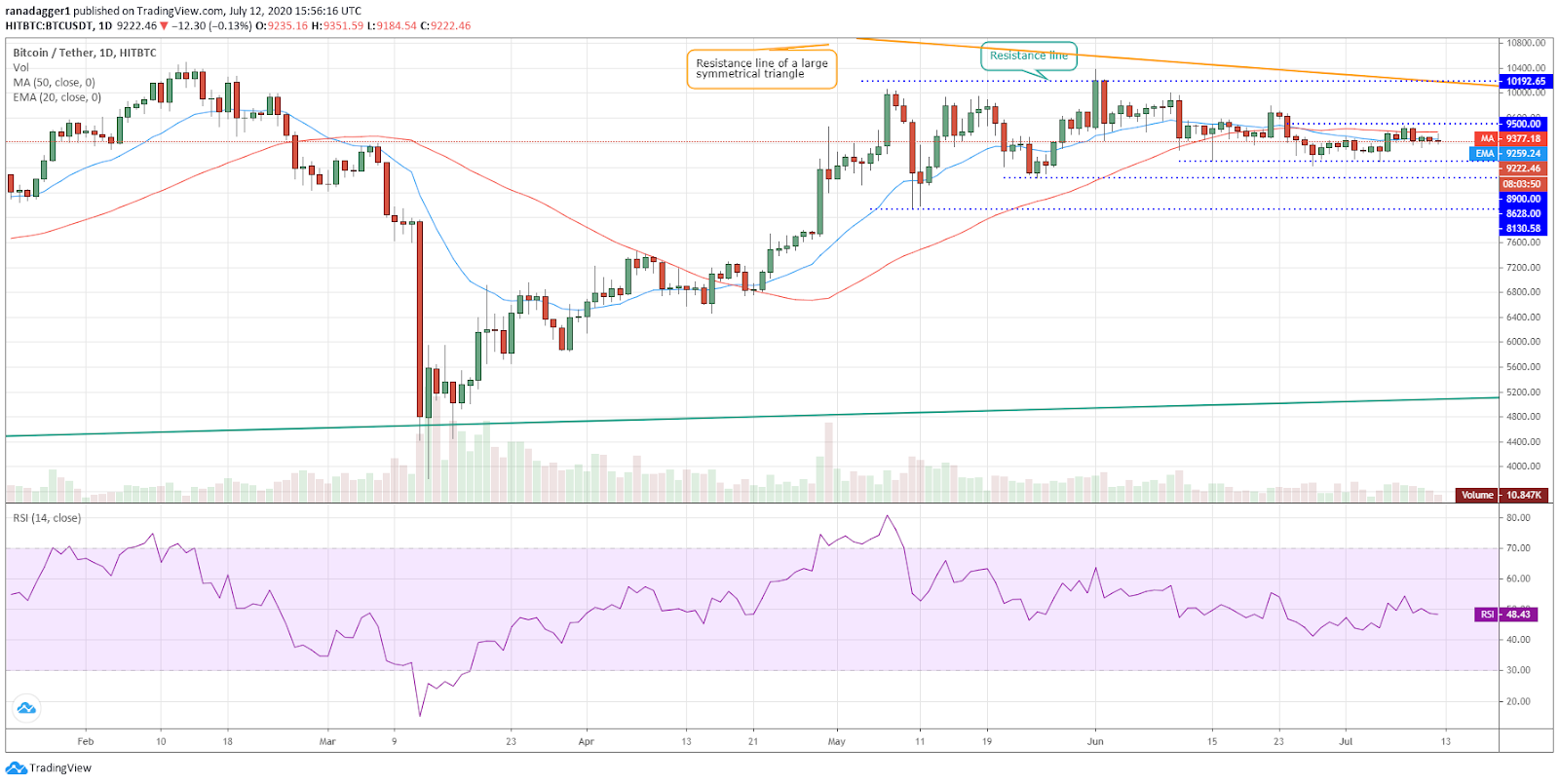 If the bulls can propel the price above $9,500, it is likely to attract buying by traders who have been waiting on the sidelines for a trending move to start. When the price breaks out after a tight consolidation, it is likely to pick up momentum.

The bears might attempt to stall the up move at the $10,000–$10,400 zone but the possibility of a breakout is high. A close (UTC time) above the long-term downtrend line of the symmetrical triangle will be a huge positive and it will indicate the likelihood of a new sustained uptrend.

Currently, both moving averages are flat and the relative strength index is close to the 50 level, which suggests a balance between supply and demand. As the charts are not indicating an advantage to either the bulls or the bears, it is better to wait for the breakout to happen before jumping in. 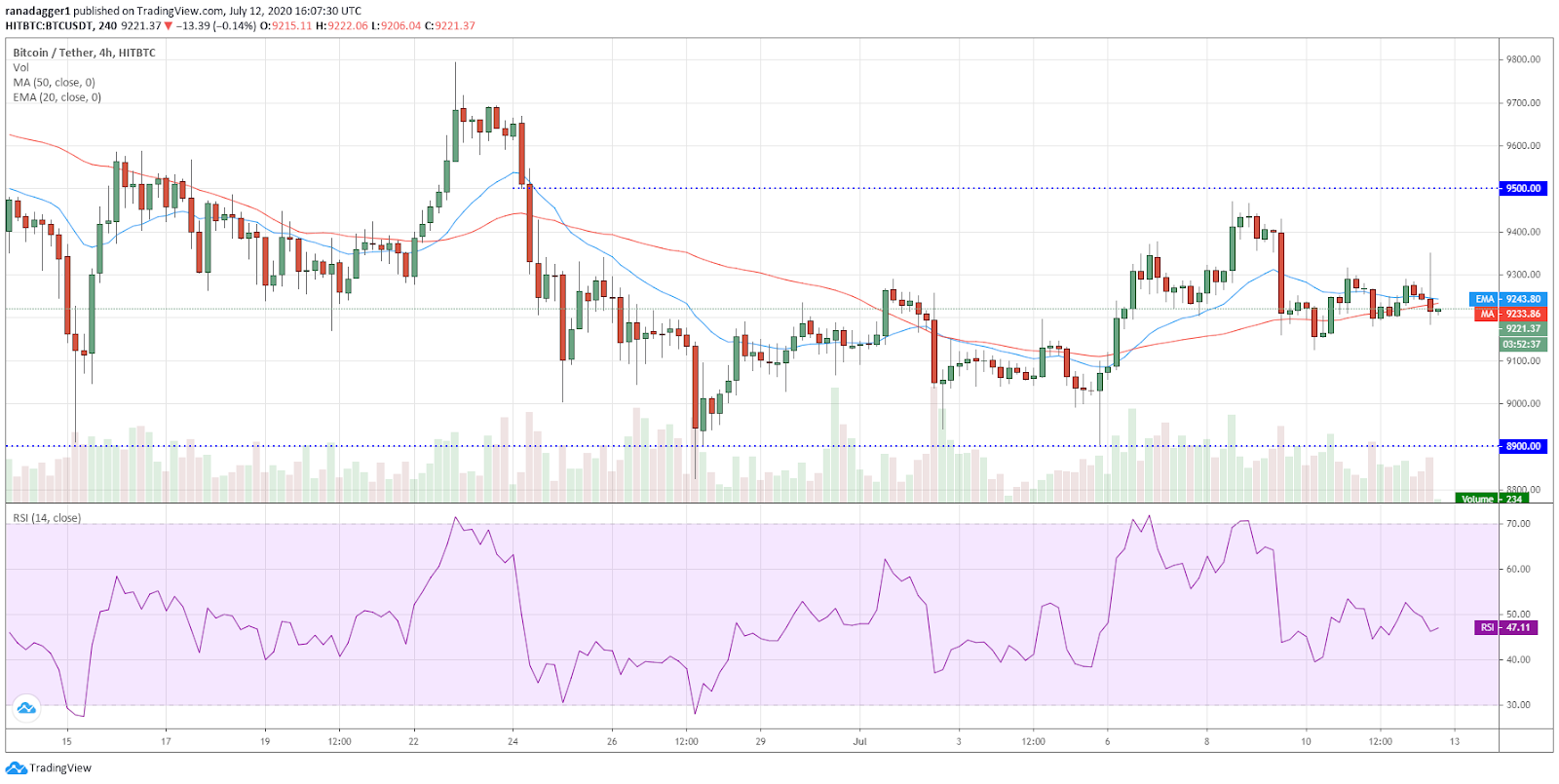 The 4-hour chart shows that the price is stuck close to the middle of the $8,900–$9,500 range. Both moving averages are flat and the RSI is also close to the midpoint, suggesting a state of equilibrium between buyers and sellers.

Chainlink (LINK) broke above the critical overhead resistance of $4.9762 on July 6 and embarked on a strong up move. While a retest of the breakout level usually happens, some times, when the breakout is too strong, the price only consolidates for a few days and then resumes the up move. 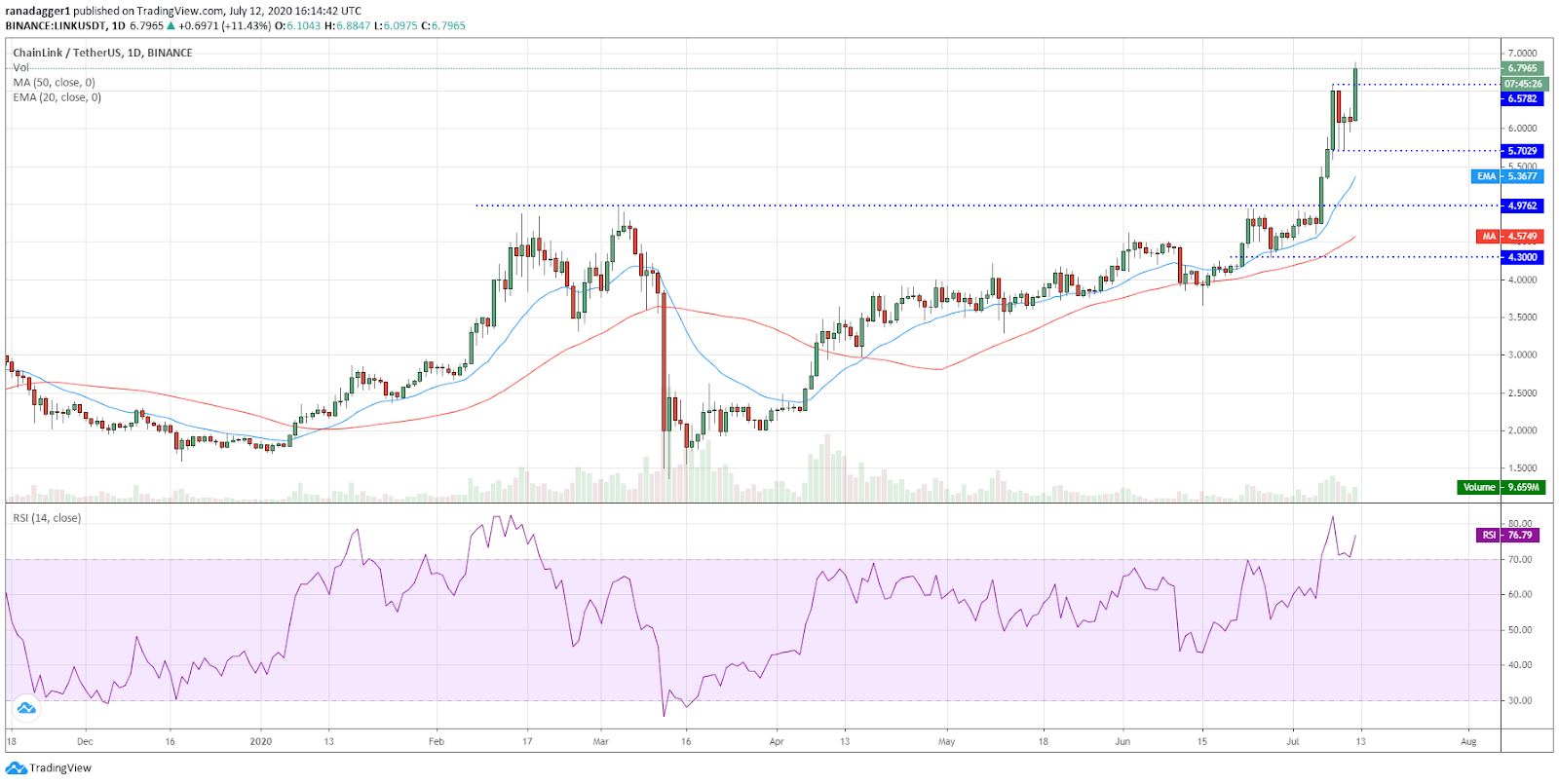 After consolidating for the past three days, the 12th-ranked cryptocurrency on CoinMarketCap has broken out of $6.5782. If the bulls can close (UTC time) the price above this level, the next leg of the uptrend is likely to resume.

The target objective on the upside is $7.6693 and if this level is also crossed, a move to $8.5446 is likely. Both moving averages are sloping up and the RSI is in the overbought territory, suggesting that bulls have the upper hand.

This bullish view will be invalidated if the price fails to sustain above $6.5782. Such a move will indicate profit booking at higher levels and could result in a correction to the 20-day exponential moving average ($5.37). 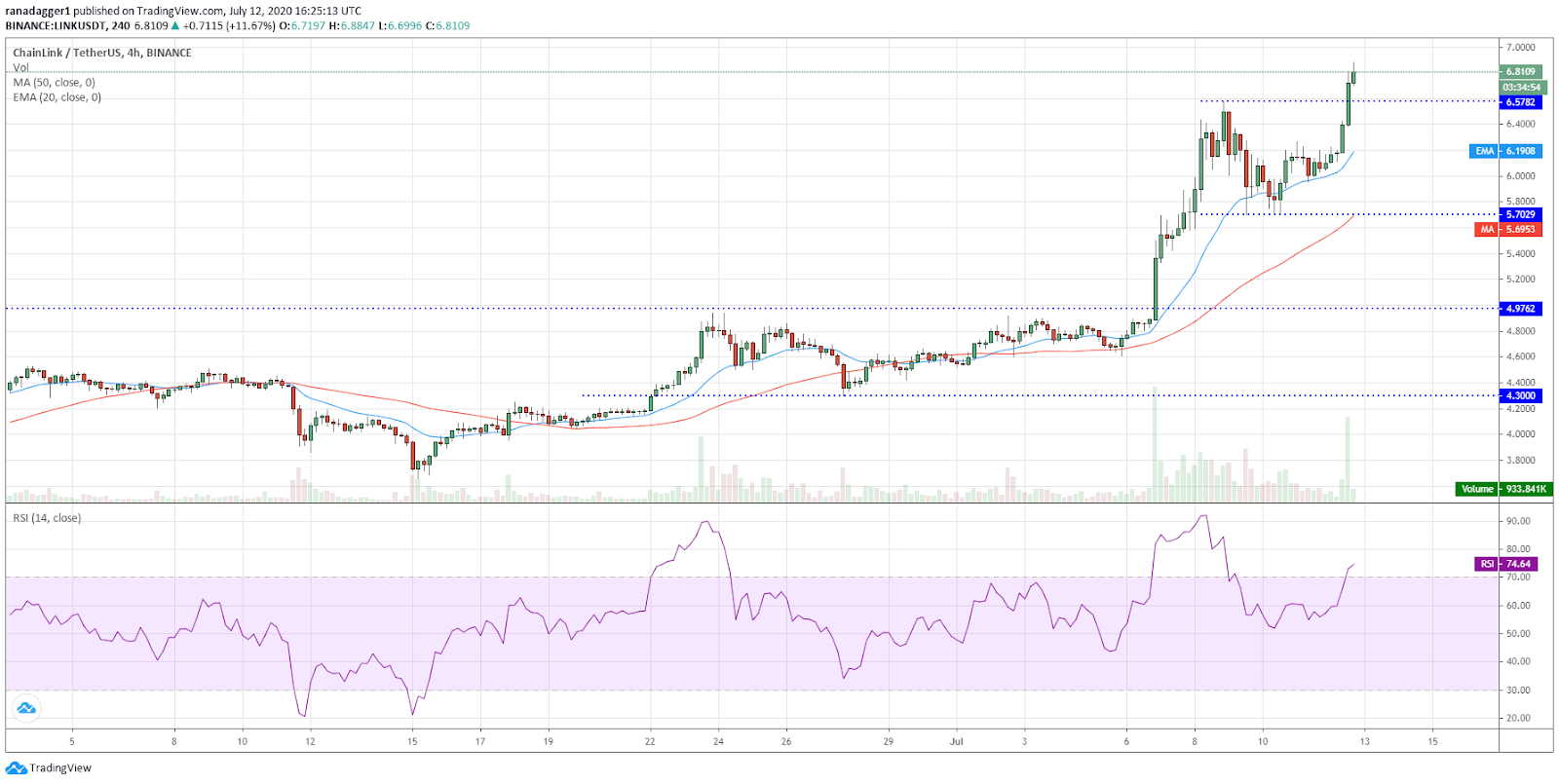 On the downside, the first support is at $6.5782 and if that breaks, the buyers are likely to defend the 20-EMA. If the price rebounds off this support, it is likely to resume its up move once again. A break below the 20-EMA will be the first sign of weakness.

Cosmos (ATOM) broke above the overhead resistance at $3.20 on July 7. That attracted aggressive buying and the altcoin quickly rallied to $4.466, suggesting the start of a new uptrend. 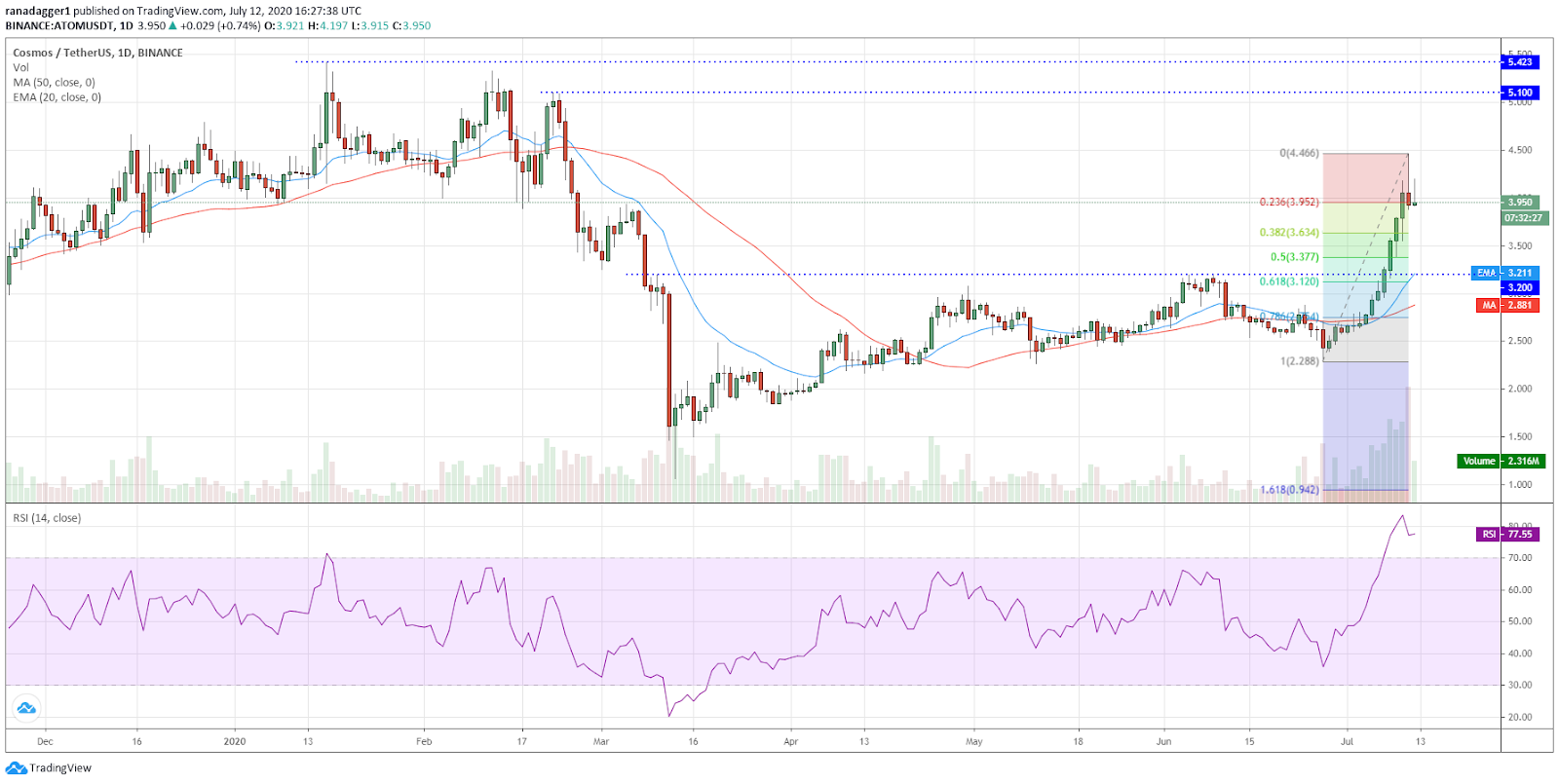 After the sharp rally of the past few days, the RSI has risen deep into the overbought territory, suggesting that a minor pullback of one to three days is possible. However, as the trend is up, any dip is likely to offer a buying opportunity.

The first support on the downside is $3.634 and the next support is $3.377, which are the 38.2% and 50% Fibonacci retracement levels of the most recent rally. In a strong uptrend, usually, the bulls do not allow the price to dip below this support zone.

If the 21st-ranked cryptocurrency on CoinMarketCap bounces off this support zone, the bulls will attempt to resume the uptrend. The target level to watch on the upside is $5.10 and then $5.423. This bullish view will be invalidated if the bears sink the price below $3.20. 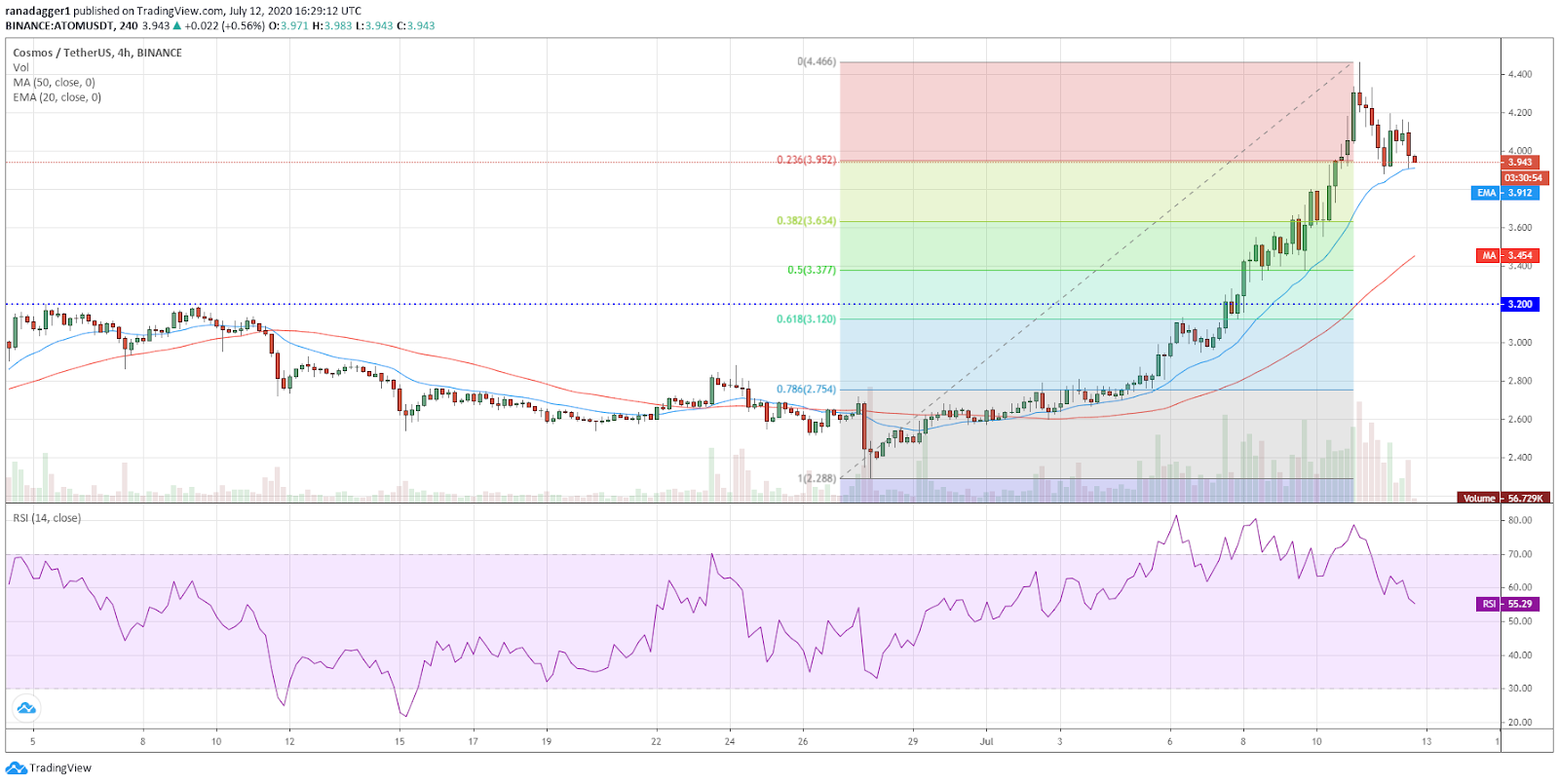 The 4-hour chart suggests some profit booking at higher levels. However, the bulls have not allowed the price to dip below the 20-EMA during this leg of the up move. Hence, this becomes an important level to watch out for.

If the ATOM/USD pair rebounds off the 20-EMA, the bulls will once again attempt to resume the up move. Conversely, if the bears sink the price below the 20-EMA, a drop to the 50-simple moving average is possible.

Stellar Lumens (XLM) has formed a complex inverse head and shoulders pattern, which completed on a break above the neckline at $0.088777. This bullish setup has a target objective of $0.151491 but the bears are likely to mount a stiff resistance at $0.13 and then again at $0.14. 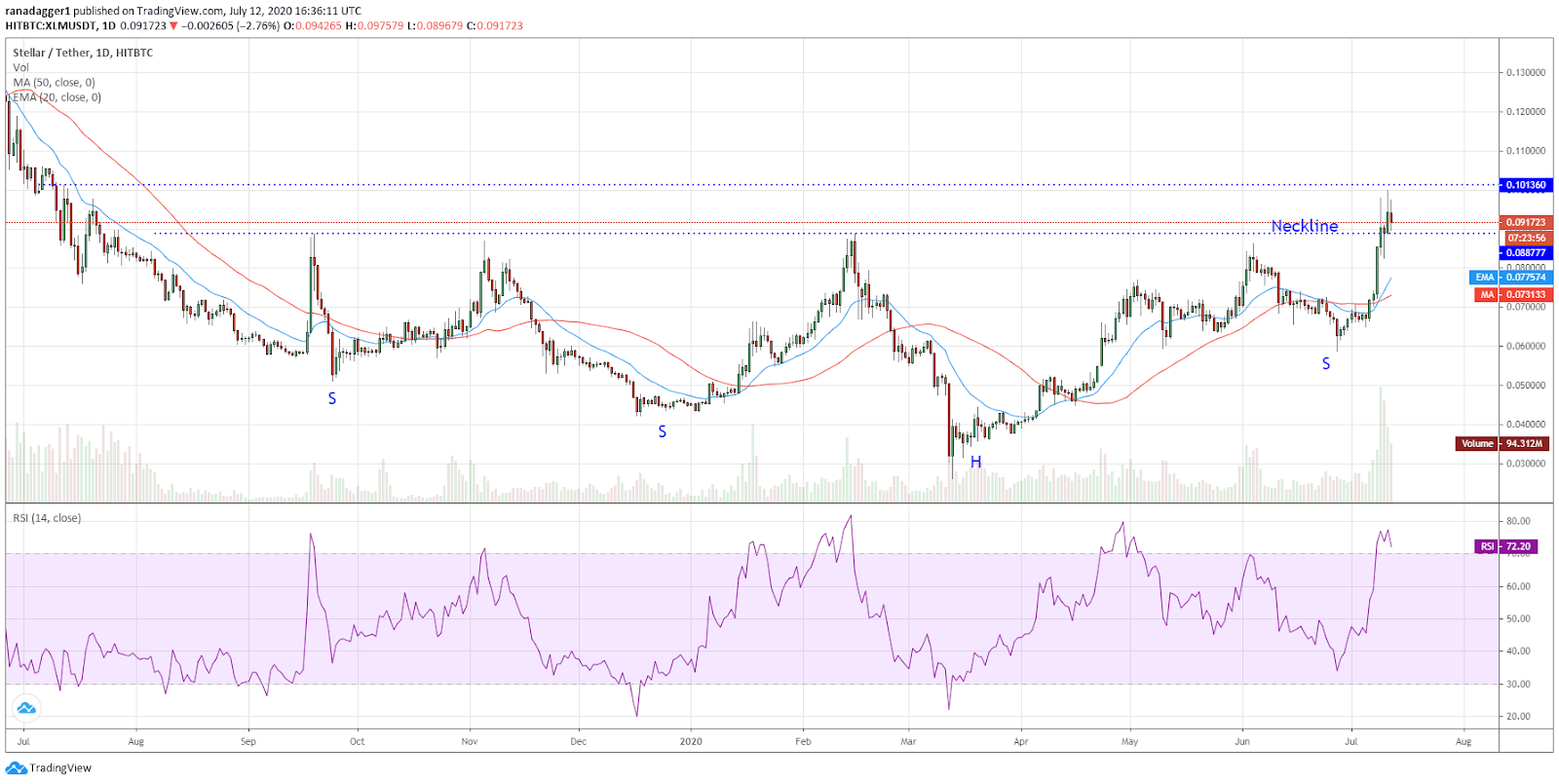 However, the failure to pick up momentum following the breakout of the neckline is a mild negative. The 14th-ranked cryptocurrency on CoinMarketCap has been facing stiff resistance closer to $0.101360, which shows that the bears are aggressively defending this level. 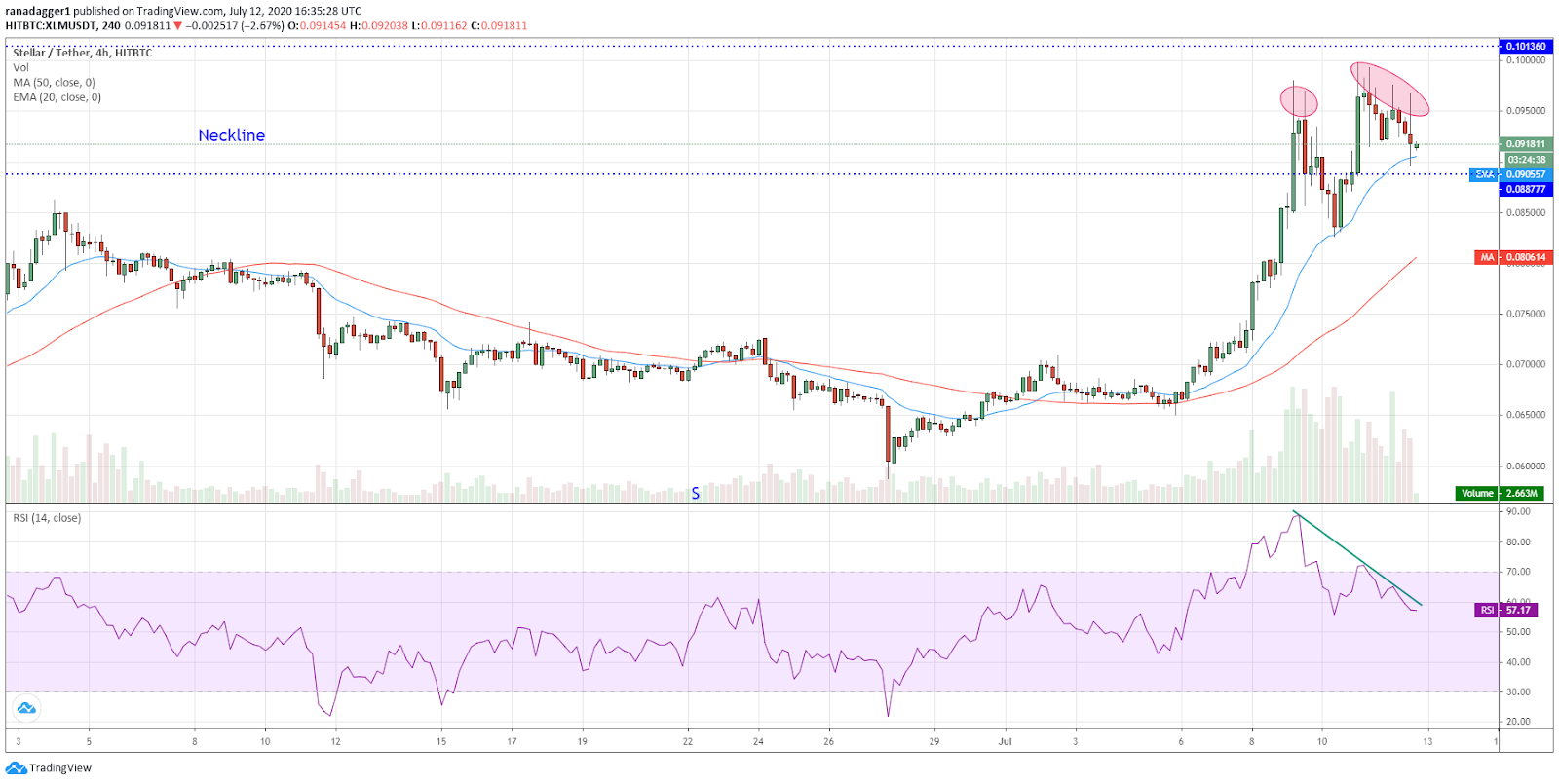 The long wicks on the candlesticks (marked via ellipse on the chart) where the price nears $0.10 level shows aggressive selling by the bears. The bearish divergence on the RSI also points to a possible correction.

If the price bounces off the $0.088777 support, the bulls will make another attempt to propel the XLM/USD pair above $0.101360. A close (UTC time) above this level will signal the start of a new uptrend.

This bullish view will be invalidated if the bears sink the price below $0.088777. If this support breaks down, it will indicate weakness.

Binance Coin (BNB) has been range-bound between $18.20–$13.9129 for about three months. Today, the bulls had pushed the price above the resistance of the range but they have not been able to sustain the breakout. 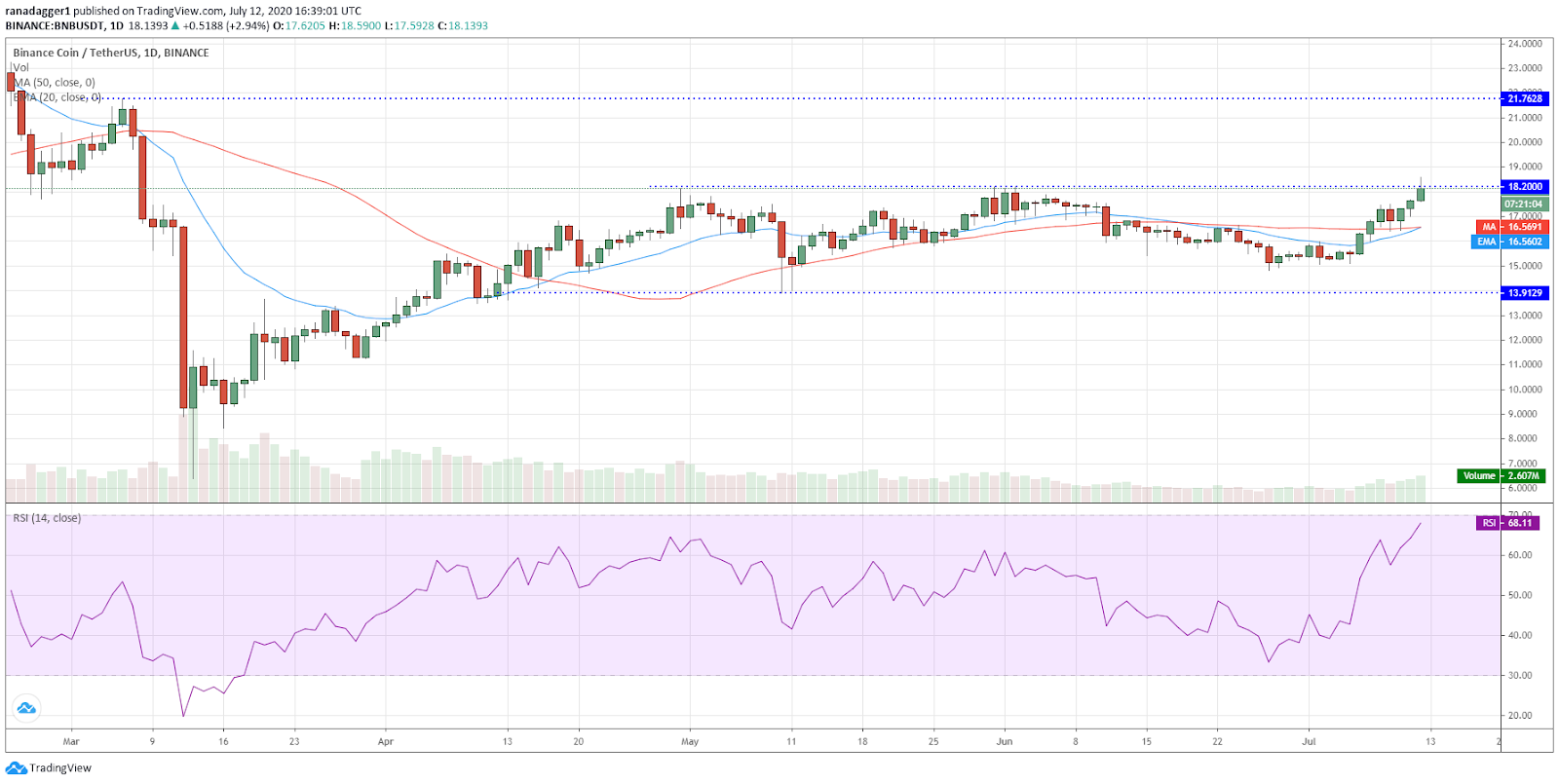 This suggests that the bears are aggressively defending the resistance of the range. However, if the bulls do not give up much ground, the buyers are likely to make another attempt to scale the price above the range.

If they succeed and the ninth-ranked cryptocurrency on CoinMarketCap closes (UTC time) above $18.20, it is likely to start a new uptrend that can rally to the next resistance at $21.7628.

The 20-day EMA ($16.5) has started to turn up and the RSI is close to the overbought zone, which suggests that the bulls have the upper hand. This bullish view will be invalidated if the bears sink the price below the moving averages. 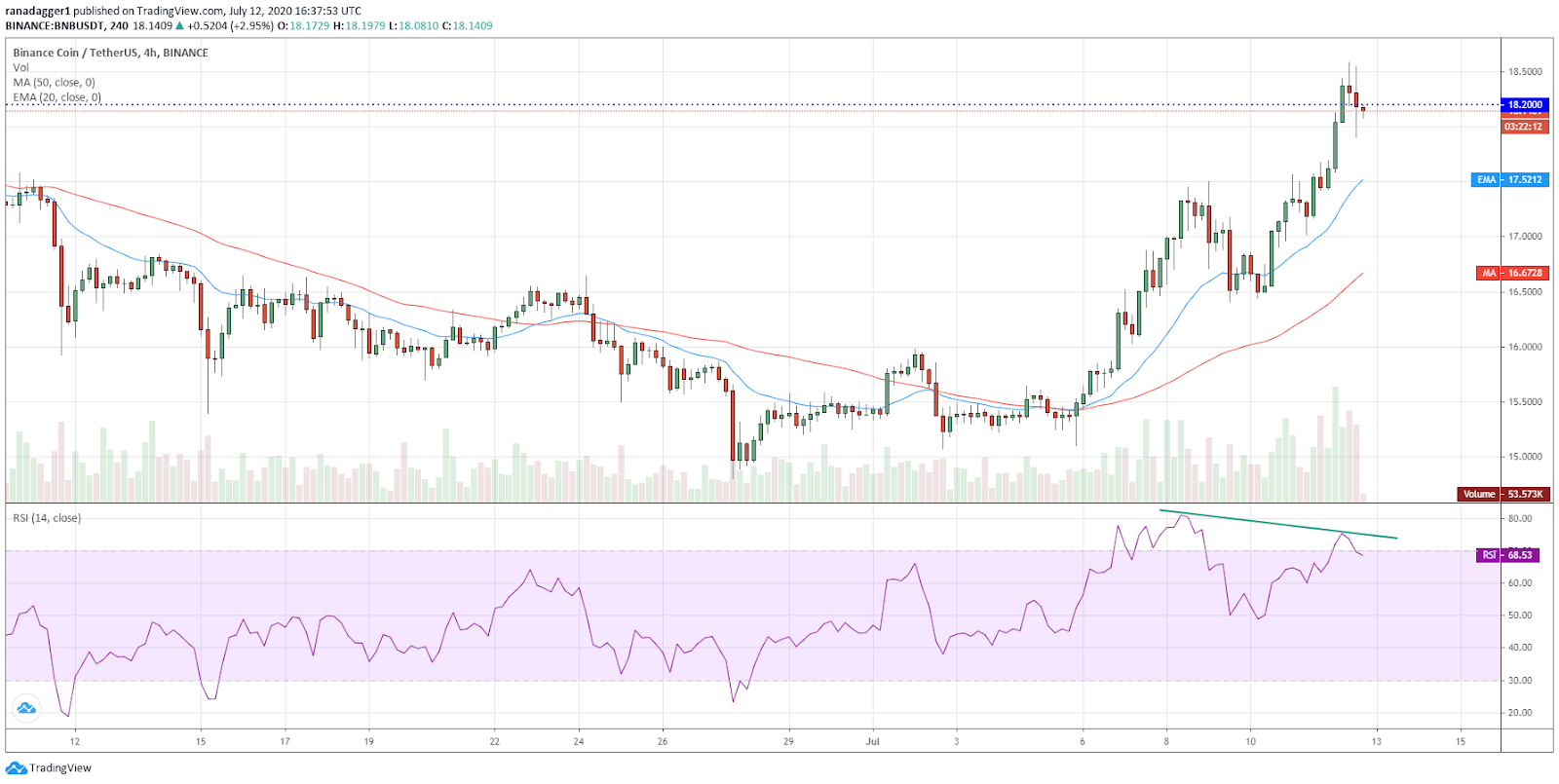 The 4-hour chart shows that the BNB/USD pair had broken above the overhead resistance at $18.20 but the bulls could not hold on to the higher levels. This suggests that the bears are attempting to defend the resistance of the range. The bearish divergence on the RSI suggests that the upward momentum is weakening.

However, if the pair bounces off the 20-EMA, the bulls will make one more attempt to break above the $18.20–$18.59 zone. If they succeed, it will signal strength and will increase the likelihood of the start of a new uptrend.

Conversely, if the bears sink the price below the 20-EMA, it will signal that the breakout was a bull trap.