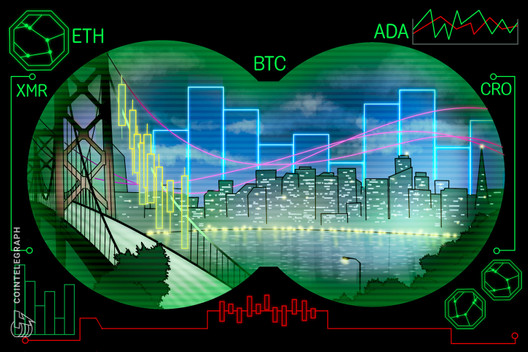 Bitcoin finally moved above the $10K mark and analysis suggests that BTC and altcoins will continue to rally together.

The total crypto market capitalization has reached $300 billion for the first time since mid-February, which is a huge positive as it suggests increased investor interest in cryptocurrencies. The interest has largely been in smaller altcoins with Bitcoin (BTC) taking a back seat until early this morning.

Even Ether (ETH) recently joined the altseason party and once it broke out of its resistance the price skyrocketed higher. This could have resulted in a missed opportunity for several traders who did not buy on the breakout.

Now, traders are likely to expect a similar move from the top-ranked cryptocurrency on CoinMarketCap as it has also been range-bound for a long time.

Therefore, several bulls are likely to start buying Bitcoin without waiting for it to breakout and short positions are likely to cover, which could provide the needed push to carry the price above the stiff overhead resistance. As the momentum picks up, there could be a buying stampede as traders fear missing out on the rally.

The upcoming week is critical as it will provide insight into whether the altcoins will continue to lead the market or if Bitcoin will join in and shift traders’ focus away from altcoins.

Bitcoin (BTC) broke above the $10,100 level today for the first time since early-June, which is likely to boost sentiment. However, the bears are unlikely to give up without a fight as they will aggressively defend the $10,000–$10,400 resistance zone. 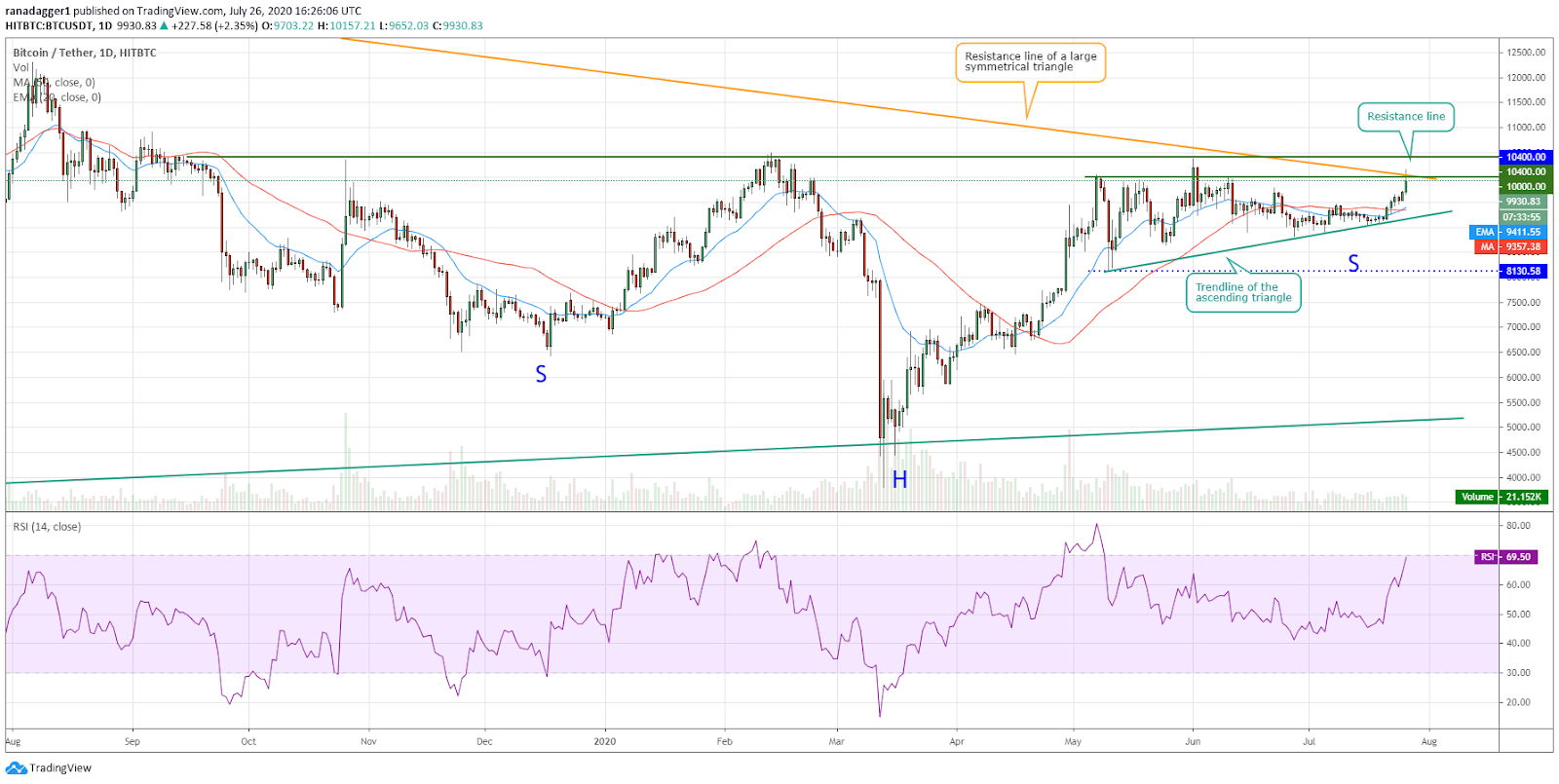 Currently, the price has dipped back below the $10,000 levels but the positive thing is that the bulls have not given up much ground. This suggests that minor dips are being purchased.

This change in sentiment increases the possibility of a break above the $10,400 resistance. If the price sustains above $10,400, it could result in short covering and aggressive buying by the bulls.

Such a move could quickly carry the price to $11,870.50, which is the pattern target of the breakout from the bullish ascending triangle pattern.

A breakout and close (UTC time) above $10,400 will also complete a bullish inverse head and shoulders pattern that has a target objective of $16,997. However, this target is likely to be achieved in the medium-term as the bears will aggressively defend the $14,000 levels.

This bullish view will be invalidated if the price turns down from the current levels and breaks below the trendline of the ascending triangle. 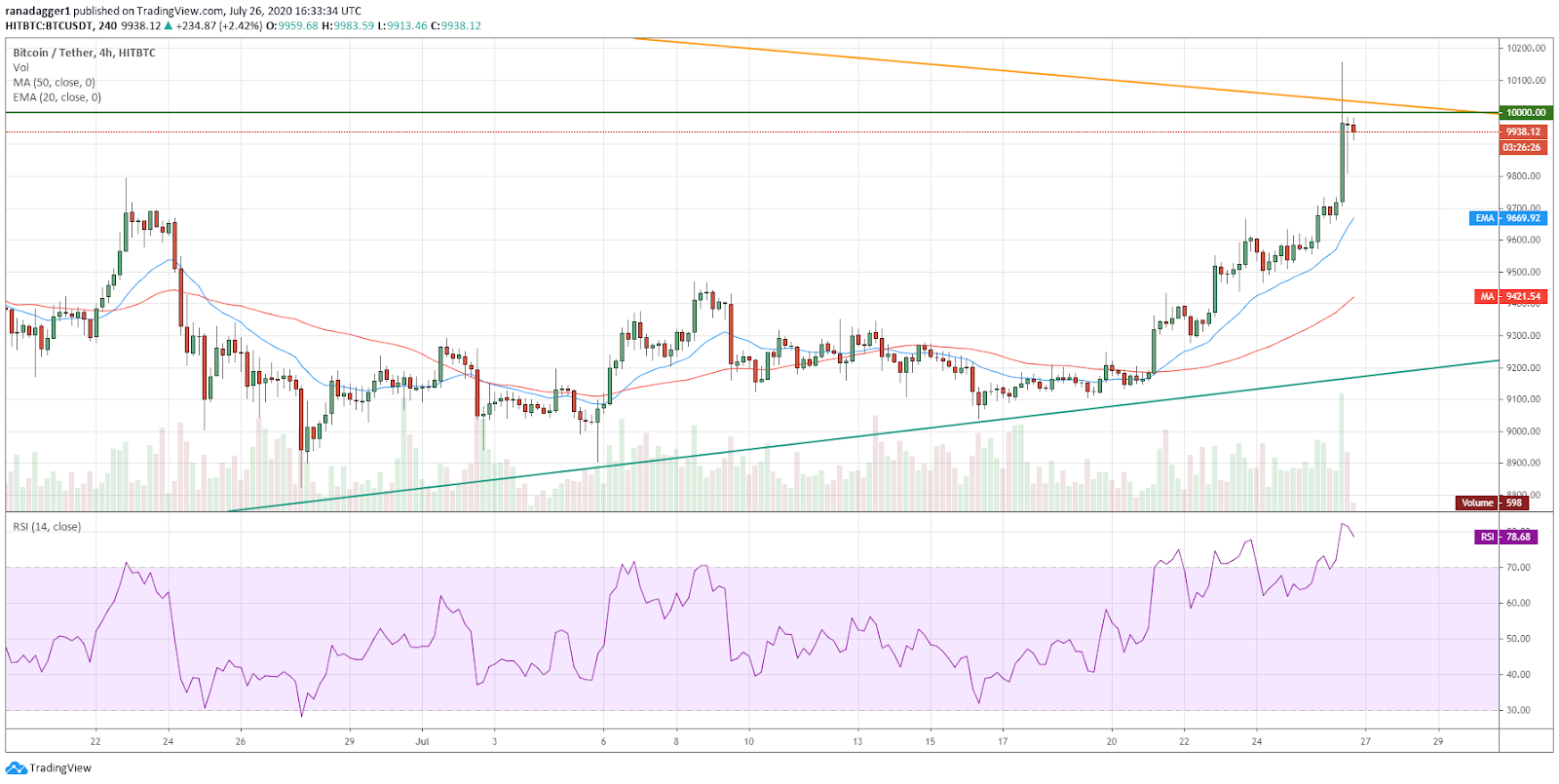 Both moving averages are sloping up and the relative strength index is in the overbought zone, which suggests that the bulls have the upper hand. The price is currently consolidating between the $9,800–$10,000 level, which is a positive sign.

If the bulls can again push the price above $10,000 and sustain the higher levels for four hours, a move to $10,400 levels is likely. A break above this level will be a huge positive and could result in a sharp move higher.

This bullish view will be invalidated in the short-term if the bears sink and sustain the price below the 20-exponential moving average. Such a move will indicate that the momentum has weakened and could lead to a minor consolidation.

After consolidating for about two months, Ether (ETH) broke above the $253.556–$216.006 range on July 22. This breakout attracted buying by the bulls who had been waiting on the sidelines for the up move to resume. 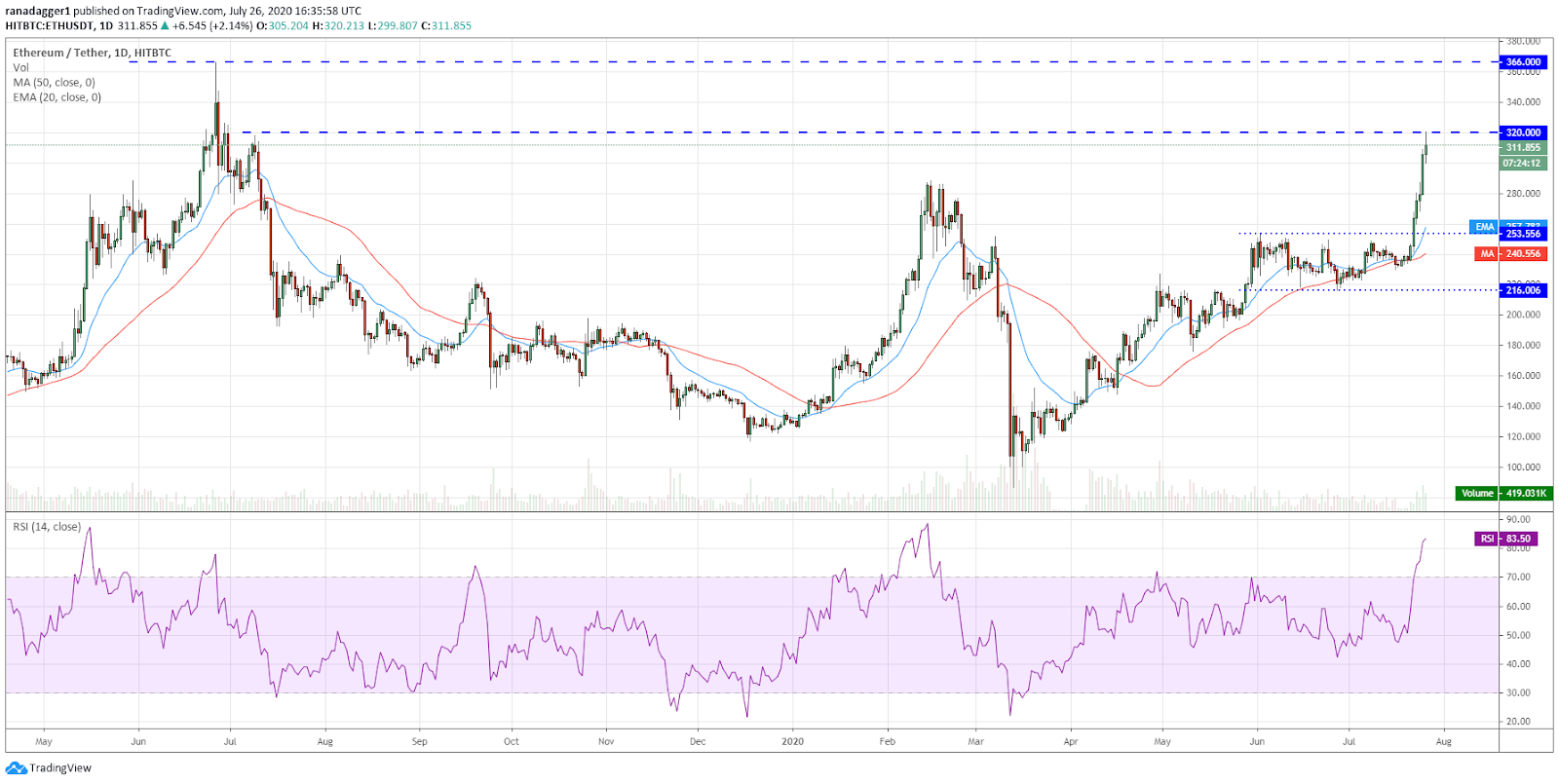 The aggressive buying quickly pushed the second-ranked cryptocurrency on CoinMarketCap to the first target level of $320. The relative strength index has risen above the 80 levels, which suggests that the rally has become overbought in the short-term.

As the price is close to a stiff resistance, profit booking by the short-term traders is possible, which could result in a minor correction or consolidation. In a strong uptrend, the pullbacks usually last for one to three days, after which the uptrend resumes. If the bulls can propel the price above $320, the next level to watch out for is $366. 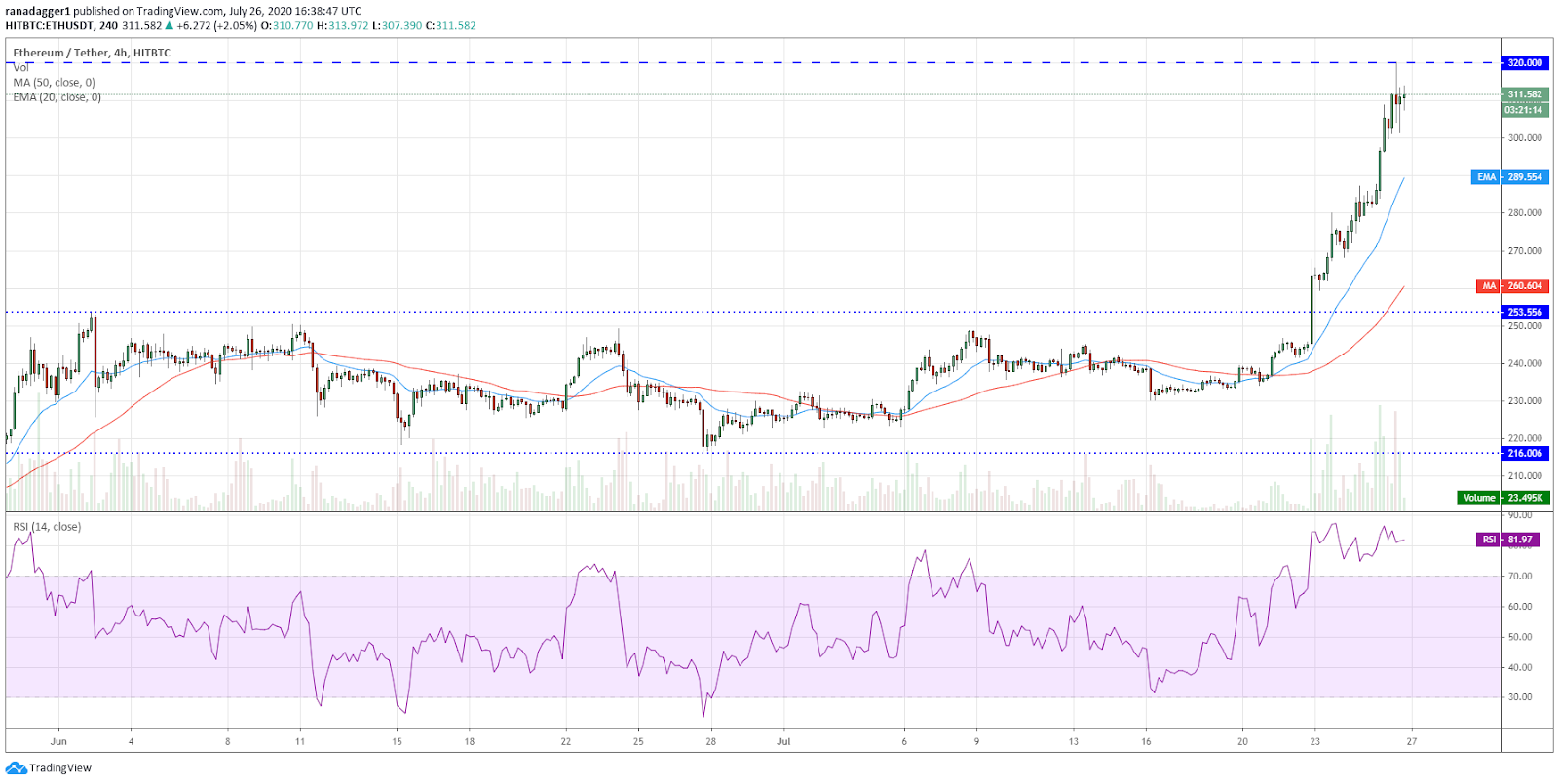 The 4-hour chart shows that the ETH/USD pair did not even correct to the 20-EMA after breaking above $253.556. The RSI has been trading in the overbought range, which suggests that the trend is very strong.

If the bears can sink the price below $300, a drop to the 20-EMA is possible. A bounce off this support will indicate that the bulls continue to view the dips as a buying opportunity. The uptrend is likely to pick up momentum once again if the price closes (UTC time) above $320.

Contrary to this assumption, if the bears sink and sustain the price below the 20-EMA, the pair could consolidate for a few days.

Cardano (ADA) broke above the symmetrical triangle and made a new 52-week high, which indicates that the uptrend is strong and the bulls continue to buy at higher levels as they expect the rally to extend further. 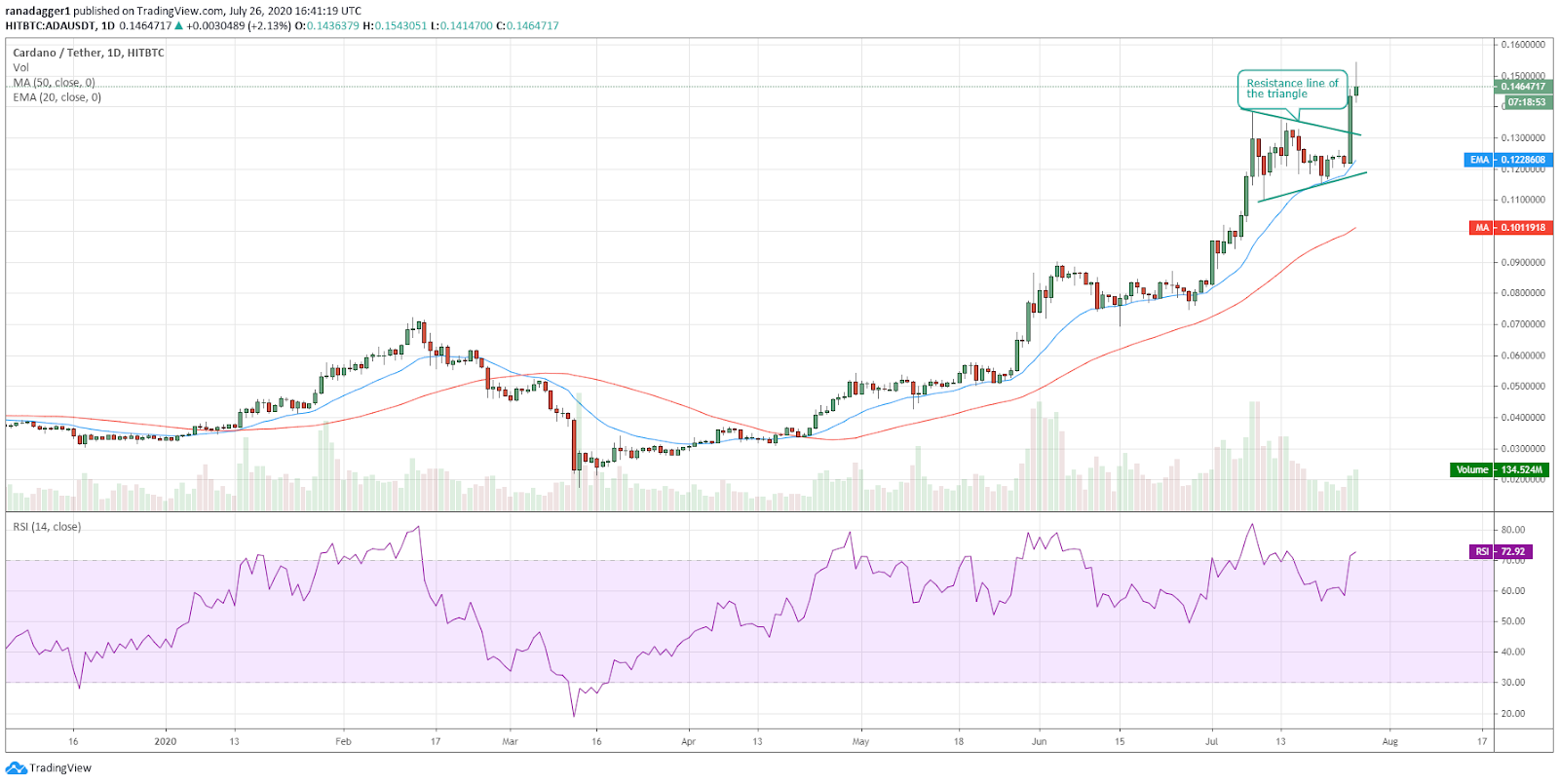 Usually, after breaking out of a pattern, the price retests the breakout levels but If the trend is strong only a consolidation occurs.

Currently, the sixth-ranked cryptocurrency on CoinMarketCap is facing profit booking at $0.1543051, which could result in a minor correction or consolidation.

If the price rebounds off $0.13 aggressively, the bulls will attempt to resume the up move and extend the rally to $0.173 and then to $0.20. This bullish up move will be invalidated if the bears sink the price below $0.12. 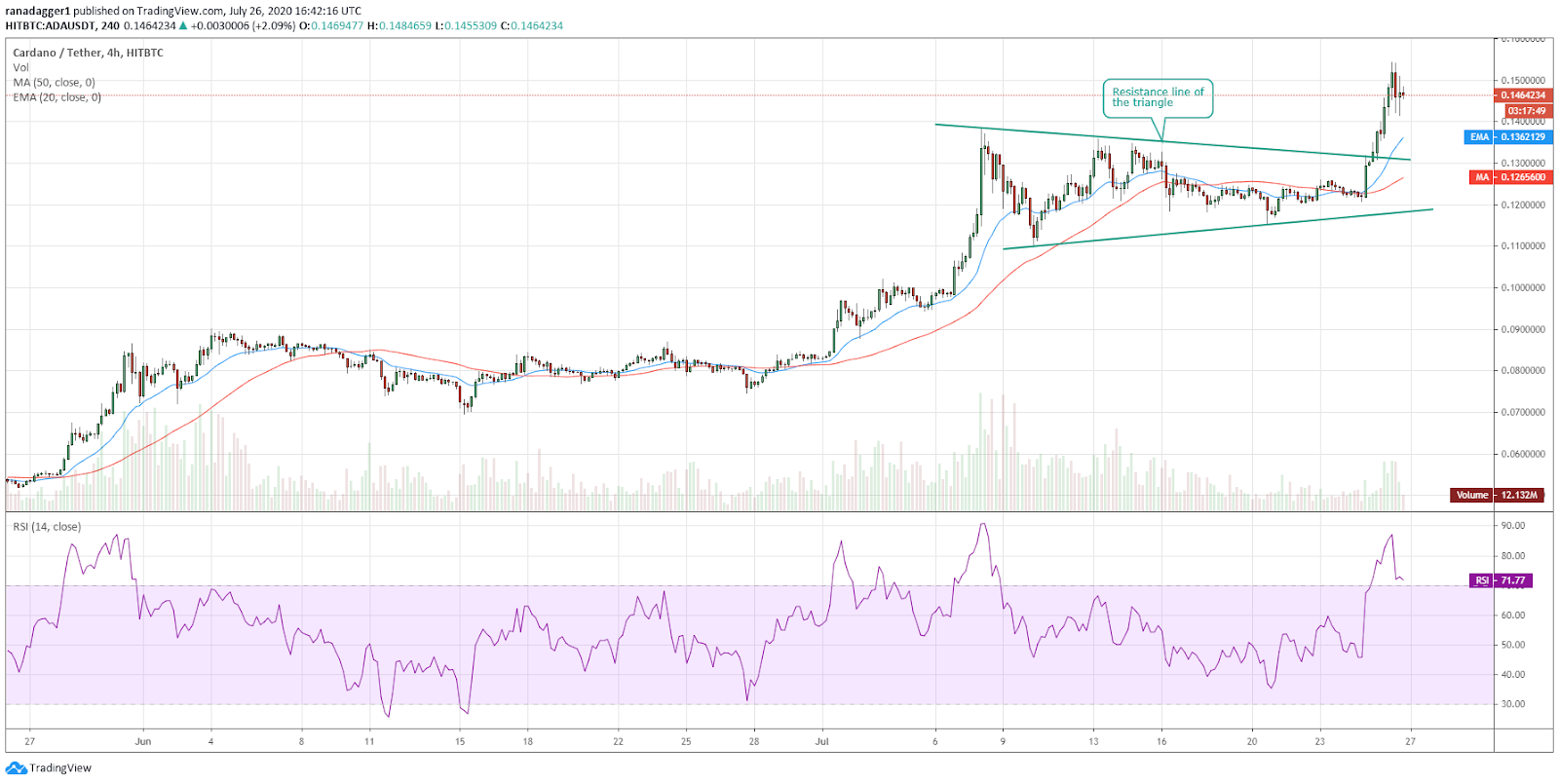 The 4-hour chart shows that the ADA/USD pair picked up momentum after breaking out of the triangle and surged to $0.1543051 levels, which pushed the RSI deep into the overbought zone.

History suggests that the pair corrects when the RSI rises above the 80 levels. The current pullback is likely to find support at the 20-EMA. A strong rebound off this level will indicate strength and increase the possibility of the resumption of the uptrend.

Monero (XMR) had been consolidating between $60–$70 for two months. This range resolved to the upside with a breakout and close (UTC time) above $70 on July 22, which suggests that the bulls have overpowered the bears. 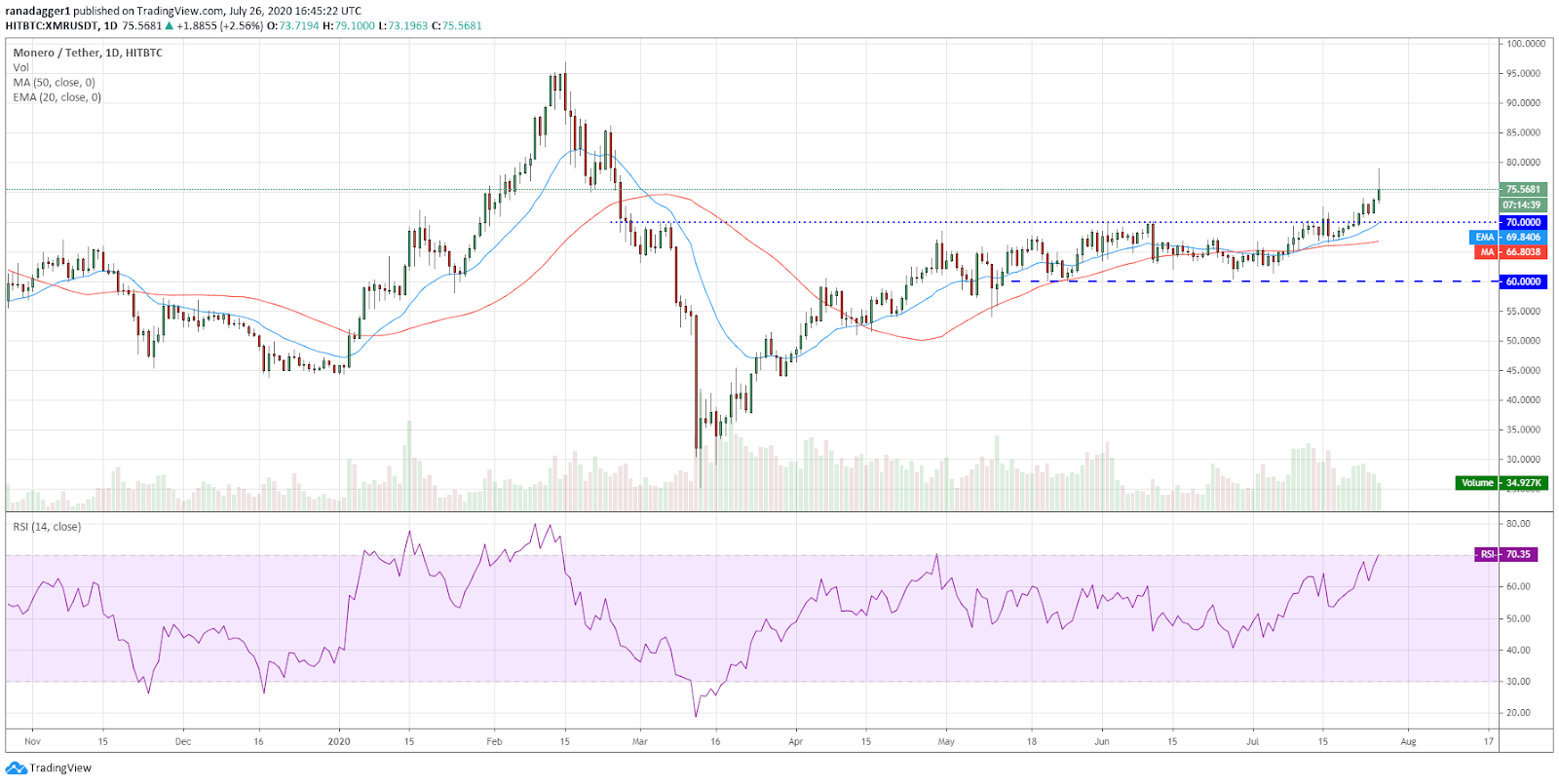 The immediate target of the breakout from the range was $80 and the price had reached a high of $79.10 today. The bears might now attempt to pull the price back into the range, hence, a retest of the $70 levels is possible.

If the 16th-ranked cryptocurrency on CoinMarketCap rebounds off this support, then it will act as a new floor and signal the possible start of a new uptrend.

The first target on the upside is $85 and if the momentum can scale this level, then the rally could reach $95. This bullish view will be invalidated if the bears drag the price back below $70. 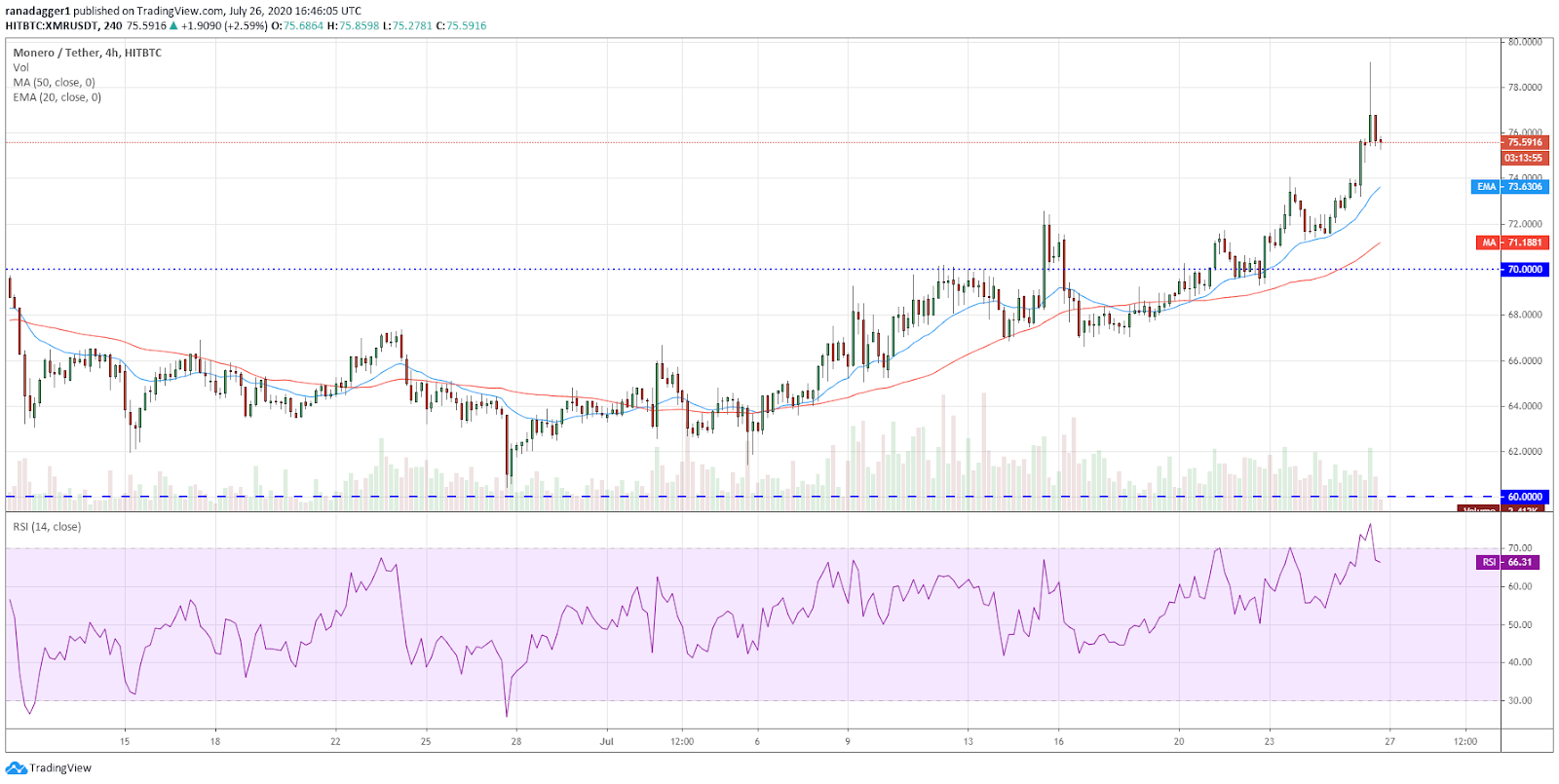 Both moving averages on the 4-hour chart are sloping up and the RSI is in the positive territory, which suggests that the bulls have the upper hand. The XMR/USD pair had reached overbought levels on the RSI, hence, a minor correction or consolidation is possible.

The first support on the downside is likely to be the 20-EMA. A strong rebound off this level could offer an entry opportunity to the traders but if this support breaks, it could signal a deeper pullback to $70.

Crypto.com Coin (CRO) is in a strong uptrend as it continues to make higher highs and higher lows. Both moving averages are sloping up and the RSI is in the overbought zone, suggesting that bulls are in command. 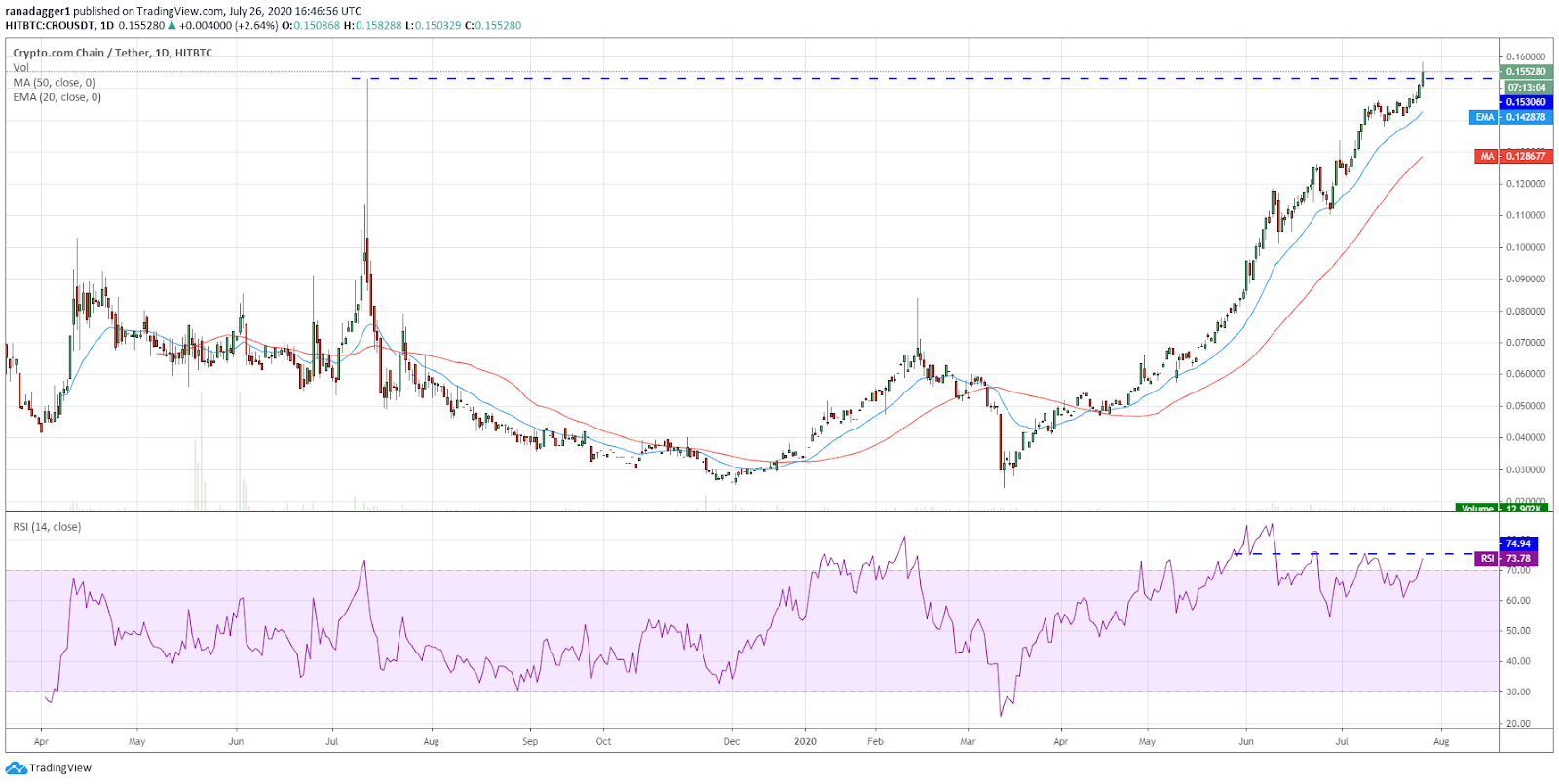 However, if the bulls fail to sustain the price above the resistance zone, a minor correction or consolidation is possible. The bullish view will be invalidated if the bears sink the price below the 20-day EMA ($0.143). 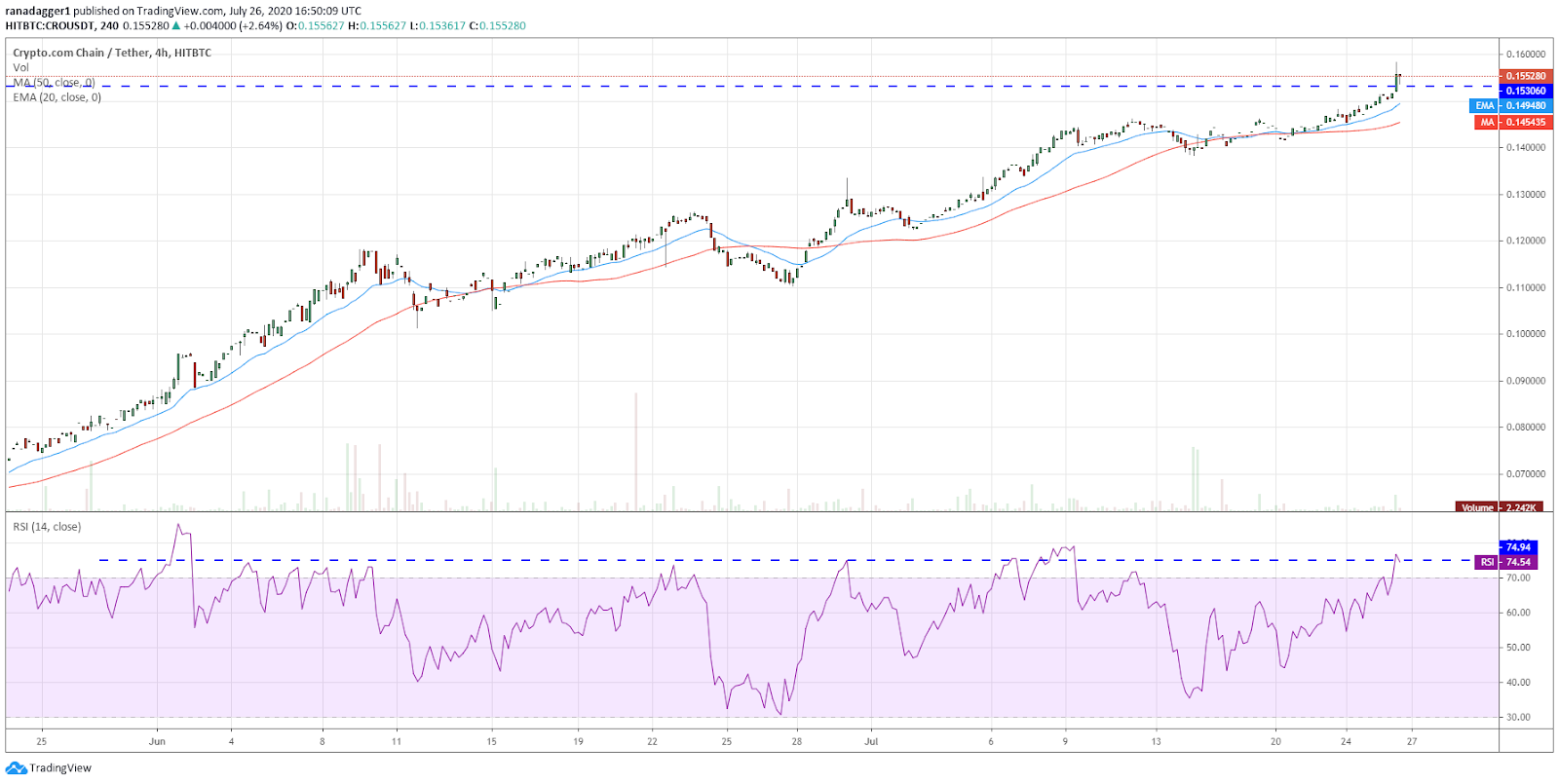 The 4-hour chart shows that the CRO/USD pair dips when the RSI rises close to 75 levels. The first level to watch out for is $0.15306 and below that the 20-EMA, which usually acts as a strong support when the trend is strong.

However, if the bears sink the price below both these supports, then a drop to the 50-simple moving average and below that to $0.14 is possible. Such a move could signal weakening momentum and result in a few days of consolidation.