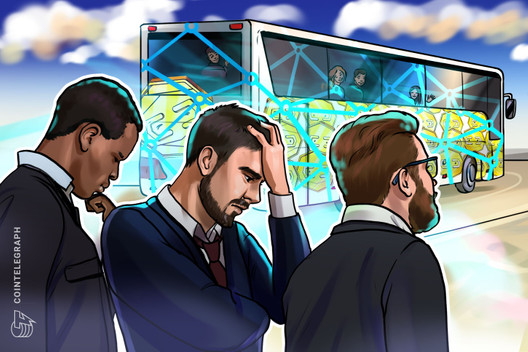 Three major shifts will lead to crypto and blockchain adoption worldwide, and they have already started reshaping our world.

There’s a revolution happening. We’re moving toward a world with a massive reduction in trust in centralized institutions and ways of doing things.

There are several concurrent shifts happening right now, including a shift away from centralized governing bodies — encompassing a lack of trust in middlemen, governments and even the authority figures hired to keep us safe — as well as a loss of trust in social media platforms, which are now more aggressively censoring content.

The second is a shift from the old financial world into a new, 24/7 digital economy, in which individuals are empowered to control their own financial future, not having to rely on a centralized party or bank. Lastly, we’re moving from the physical world to the digital.

Blockchain and crypto, in conjunction with COVID-19, are acting as massive accelerants to these shifts. Millennials and Generation Z are taking control of what they’re doing so they won’t have to rely on anybody else, slowly turning Wall Street and governments on their heads. All of this forms a perfect storm. Let’s look at each shift individually.

Shift 1: The lack of trust in governments and corporations

Many people don’t like the government’s response to COVID-19. Here in the United States, many see what’s happening overseas, how certain countries are implementing digital IDs that allow them to see if you’ve had COVID-19 or not, as an intrusion of privacy. Talk of immunity passports and body temperature checkpoints is further deteriorating trust in centralized institutions. Different countries have different laws and culture, and in the U.S., it’s going to be very difficult to implement such measures, because this is “the land of the free.”

Blockchain and crypto apps providing privacy solutions will help mass adoption. The Brave Browser, for example, provides increased privacy while simultaneously giving users a seamless experience. The browser integrates crypto and rewards for completing an action, which usually boils down to watching an advertisement. I bet a lot of people signing up for Brave don’t know much about tokens. They just like the privacy aspect. But once they realize they can earn crypto by surfing the web, I bet they learn about crypto. With that said, privacy coins also provide solutions to the censorship problems people face today, and therefore will help mass adoption.

When people lose trust in the system, they want to express these feelings. But trust in corporations like social media outlets is also waning, as Facebook, Twitter and YouTube all censored users. People see how these centralized organizations have the power to censor free speech, and soon they’ll see how crypto and blockchain provide solutions.

When it comes to preserving free speech, DLive, the largest live streaming community on the blockchain, empowers people to say whatever they’d like without worrying about censorship. While we need something that’s censorship-resistant, I believe we also need mechanisms in place to monitor and hide things like calls to violence — that is, such platforms need consensus and community-based governing mechanisms. This is a challenge for the industry to consider when it comes to the road to mass adoption.

Traditional financial markets will have to adapt to the decentralized way of doing things, and they are already investing research and development money into such ideas. Big companies implementing blockchain will go a long way toward mass adoption. For instance, CashApp had solutions and applications for people to manage money, and the company seamlessly integrated Bitcoin (BTC) into that.

PayPal might be moving toward offering buy options for Bitcoin if recent reports are true, therefore adding the option for its tremendously large user base. Facebook is developing its own token, Libra. Tech giants like this will only increase the speed with which crypto and blockchain is adopted.

While global political and social trends will play a role in the mass adoption of blockchain, so too will the tokenization of trading cards and video games. Since blockchain is able to manage digital scarcity in an immutable way, digital trading cards are possible in a way like never before. If somebody says there are only 100 of these digital cards that will ever exist, and you can put that on an immutable ledger or blockchain to verify that is the case, you can’t have any issues with people creating fakes. That’s a big deal!

Enjin represents an ecosystem of integrated blockchain software products that enables developers to integrate crypto tokens into apps and games. Topps Digital Garbage Pail Kids, which are digital trading cards based on crypto personalities and issued on the WAX blockchain, sold out in just around 28 hours. Before that, CryptoKitties was popular. It was about breeding and trading cute kitties, and people didn’t need to know anything about blockchain. We’re already seeing some of these trading cards for sale on eBay. There’s a marketplace for this in a big way.

Moreover, people are open-minded today when it comes to owning a share in a painting or other pieces of art. I don’t think that impulse has existed until recently. But, now the world is open to having fractional ownership in things in the form of tokens.

The road to mass adoption

When it comes to mass adoption, you want to get to a place where people don’t even know that they’re using blockchain and crypto. You don’t even want to lead a pitch for this technology with those terms, because they can almost deter people. With the internet, users don’t need to understand the Internet Protocol, for instance. To be able to use the internet, they can just hit, say, Amazon, without knowing the technology behind it. They just know it works, because it gets them to the site. That sort of approach is the road to mass adoption for blockchain.