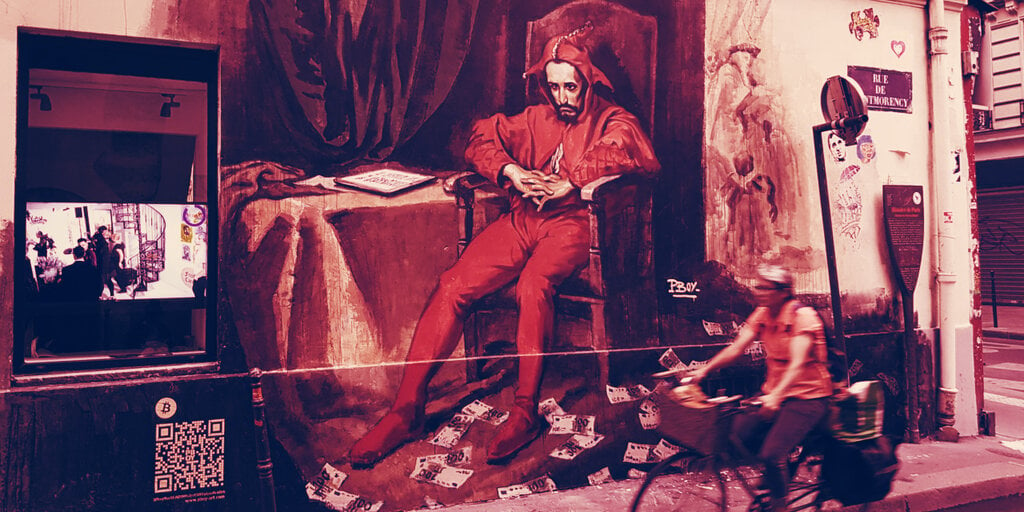 Now here’s a clever way of funding your artwork. Artist Pascal Boyart recently painted a mural in Paris called “Confessions of a Red Jester,” a modern interpretation of the 1862 painting “Stańczyk” by Jan Matejko.

In Boyart’s rendition, the titular jester is surrounded by fiat bills on the ground and has what appears to be a tablet on the table next to him. Boyart has described the painting as being about both fiat money and quantitative easing.

My new mural with a #Bitcoin QR code for donations is just finished!

"Comtemplations of the Red Jester"

is a #mural about #fiat

It can be seen in rue de Montmorency, Paris

There’s another unique element to it: a large QR code in the lower left corner, along with a spray-painted Bitcoin logo and a wallet address below. The QR code allows anyone who scans it to donate Bitcoin directly to Boyart without any sort of intermediary.

And it’s working. Boyart tweeted today that he has thus far received 0.0514 BTC since first revealing the artwork five days ago, or just less than $500 to date.

Boyart is no stranger to the world of cryptocurrency and blockchain. He tells Decrypt that he has used QR codes on his paintings since 2017 and has received more than 1.3 BTC (nearly $12,000 as of today) in donations over the last three years. He even wrote a tutorial to help other artists do the same.

He also has crypto donation links on his website for Bitcoin, Ethereum, Litecoin, and Monero. Furthermore, Boyart has tokenized his own artwork as non-fungible tokens (NFTs), selling several pieces—some with added animation—split into collectible fragments via OpenSea.

For Boyart, the ability to accept donations via Bitcoin from anyone who sees his outdoor paintings, even if they don’t know his name or other work, lets him continue to produce compelling, conversation-sparking artwork.

“It helps me to fund my next murals and keep my independence,” he told Decrypt.