There Were No ‘Hackers,’ Justin: The STEEM Network Takeover Unraveled

‘Controversy’ is one word that the crypto industry has become accustomed to, given the ever-growing list of hardforks since the Bitcoin network launched a little over a decade ago.

However, what is arguably the most disturbing of such controversies happened on Monday with Tron Foundation CEO, Justin Sun collaborating with top exchanges including Binance, Huobi, and Poloniex (owned by Justin) to mastermind a complete takeover of the Steem Network.

While the manner of the overthrow is disturbing for anyone who imbibes the inherent principle and attributes of decentralized systems, it was not entirely unexpected, as we predicted in earlier coverage of the development.

It all began with the announcement in early February that the Tron Foundation and the development team at STEEM will collaborate to “bring Steemit and other Steem blockchain-based dApps to TRON blockchain and its community of over 20 million users, products, and services.”

While Justin Sun and the Tron Foundation labeled the move as a strategic partnership in a now-deleted press release, Steemit Founder, Ned Scott, showed up on Twitter a few hours later to announce that he has sold Steemit to Justin Sun.

With Steemit, arguably the most significant asset on the Steem Network sold and other Steem blockchain-based dApps reportedly on their way to the TRON blockchain, a network struggle was likely to ensue to decide the existing distribution structure and the future of STEEM tokens.

Having acquired Steemit, Justin Sun invariably acquired the microblogging site’s portion of STEEM tokens (65 million tokens), which amounted to close to 20% of the network’s circulating supply. Those 65 million tokens were worth appr. $10 million.

Given that STEEM operated a delegated proof-of-stake consensus mechanism, owning a large amount of these tokens equated to having significant control over network decisions. Community elected witnesses on the STEEM Network decided to take action to prevent Justin from using the STEEM tokens in his power to hijack the network anytime in the future.

That fund freezing was added as a code in STEEM Soft-fork v0.22.2 on Feb. 23 and was not entirely uncalled for since those tokens were part of what the STEEM community called “ninja-mined stake.”

This stake is intended to help with further support and financial developments of the STEEM blockchain, and not to be sold either in the market of via exchanges.

Having access to these token, undoubtedly allowed Steemit to dominate the network decisions. But the STEEM community was no longer comfortable with it, given the change in administration and ownership at Steemit, hence the decision to freeze it.

While the STEEM community of witnesses made a decision that Justin Sun at that time could not revoke, the Tron CEO struck back by liaising with exchange to power up customer’s STEEM tokens on their platform to engineer a takeover.

Such an approach was unprecedented since it meant user funds were used to influence the governance of a blockchain without their consent.

In the end, Justin Sun and his exchange allies succeeded in overtaking the STEEM network, when they controlled the top 20 witness positions on STEEM, reversed the earlier soft fork and implemented a hardfork to allow user tokens on exchanges to become functional once more.

But that wasn’t all.

Justin’s follow-up update on the situation took longer than usual to arrive and labeled the earlier network witnesses as ‘hackers,’ a narrative that is not fitting for a soft-fork decision executed by the STEEM community.

#STEEM has successfully defeated the hackers & all funds are super #SAFU. @SteemNetwork and @steemit community is now stronger than ever since we united & solved the difficulties! Full details below

While the Tron CEO also claimed that it was criminal activity, that narrative may not fit in given the fundamental role filled by the “ninja-mined stake,” tokens, which he claimed puts every STEEM holders’ interest in danger.

Conversely, The chart below shows that the top-20 witnesses or delegates (all registered in February) had little to no backing from other STEEM holders, as noted in the “voters total” column vs. the overthrown witnesses. 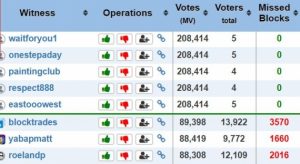 Justin, though, has pledged to continue using the “ninja-mined stake,” for the intended purpose even though he mentioned little about the level of authority he now has over STEEM governance.

However, Binance CEO, Changpeng Zhao has tried to exclude his firm from the saga. He first noted that his team was contacted to support an upcoming STEEM “upgrade/hardfork” and had only lent their support as they would any other project.

He subsequently confirmed at press time that they had withdrawn their votes, which helped the STEEM network takeover, even though it appears the damage has already been done.

In the end, the current STEEM drama has raised a lot of questions regarding the future of delegated proof-of-stake blockchain networks, the role of crypto exchanges, and how long the decentralized principles of the crypto community would endure, as powerful centralized entities grow.