Tether: Challenging the USD’s Hegemony, Championing CBDC and Beyond 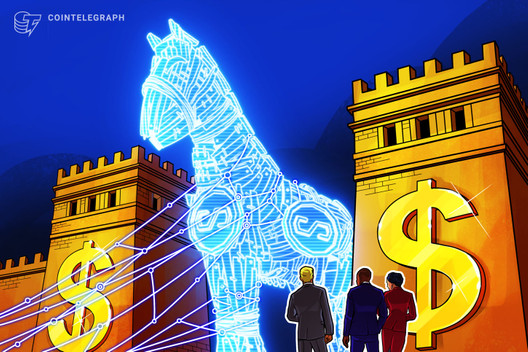 In 2008, a momentous occasion took place with the release of the Bitcoin (BTC) white paper. With author Satoshi Nakamoto explicitly calling for the deconstruction of financial intermediaries, regulators around the world were put on alert, particularly as Wall Street faced one of its biggest crises since the 1930s. While Bitcoin’s lack of a stable pricing mechanism has prevented it from becoming a commonly accepted medium of exchange, Tether (USDT) — one of the earliest stablecoins, developed by Tether Ltd. — has addressed this.

In 2014, Tether Ltd. issued its namesake stablecoin, Tether. As the earliest U.S. dollar-backed stablecoin, Tether has claimed that each unit of USDT is 100% backed by its dollar reserves. After China cracked down on crypto exchanges in 2017, traders encountered difficulties when trading crypto assets with fiat currencies. Thus, Tether was initially used as a value exchange vehicle. However, Tether became the most accessible entry point for traders after China further tightened its cryptocurrency ban that year, thus driving rapid growth in one of the key assets in the cryptocurrency market.

Recently, Tether has come under intense scrutiny from traditional financial institutions and regulators that believe it could threaten the U.S. dollar’s hegemony due to accelerating mass adoption of USDT for cross-border remittance, payment and settlement, foreign exchange, and payroll.

Tether has surpassed its original application, going from a quote currency in crypto-asset trading into an alternative currency capable of facilitating cross-border remittance and payment settlements.

As of 2019, approximately $212 billion of funds was transferred or settled through USDT. In short, despite its short history and relatively low market penetration, Tether has already created alternate currency markets divorced from traditional monetary and financial systems.

More significantly, USDT is increasingly flowing to dollar-inaccessible areas. In short, it effectively functions as a more efficient and flexible form of the dollar. Moreover, as a distributed network, Tether operates outside the purview of the U.S. banking system and centralized monetary policy. As its penetration increases, authorities are increasingly viewing Tether as a threat to the dollar’s hegemony.

The U.S. Federal Reserve leverages the dollar in two ways to maintain hegemony. First, it leverages the dollar’s status as the dominant global currency to influence global monetary policy. Second, it is able to control the flow and circulation of the dollar through the U.S.-controlled global payment and settlement systems, namely SWIFT, Visa and Mastercard.

Since World War II, the U.S. has played a leading role in terms of shaping the global monetary system. Thanks to the dollar’s hegemony, it has been able to maintain a dominant position within the financial system while also driving economic growth. As such, the U.S. Federal Reserves’ monetary policy directly impacts global monetary, financial and trade markets.

For example, by leveraging its balance sheet, the Federal Reserve is able to periodically recover foreign-owned dollars and debt to improve trade competitiveness. Moreover, the dominance of SWIFT around the world further enhances the Federal Reserves’ control over the flow and circulation of dollars as well as American dominance.

Through the SWIFT network, the U.S. possesses the ability to block international settlements by other countries — a move that strikes a major blow to sanctioned countries.

As an audit-resistant form of currency, Tether disrupts U.S. control over dollar circulation while weakening the Fed’s monetary policy influence.

Given that the current monetary paradigm is predicated on centralized control, Tether represents a threat to the Federal Reserves’ control and influence. As a form of currency independent of the dollar, it has created a new distributed system that threatens to replace the traditional banking system. Moreover, as Tether’s network is unaffected by the Fed’s tightening and easing policy of the dollar, it also represents a threat to U.S. influence vis-a-vis dollar hegemony.

Moreover, Tether is also capable of circumventing the SWIFT system by creating a decentralized system that can penetrate either sanctioned or underserved regions. Leveraging blockchain’s trustless nature, Tether can deliver enhanced efficiency while removing human risks — as well as the central banking and payment system. In short, Tether’s existence represents a threat to the relevance and power of centralized banking systems.

Users of Tether are either unable to or unwilling to access U.S. dollar services through compliant financial channels. Regardless, users are willing to shoulder a higher cost when compared to the dollar. This premium is derived from channel fees paid by end users to minters through fiat channels.

Further showcasing Tether’s impact on the Federal Reserve’s control, it has opened new doors to the dollar — namely in regions or countries with weak sovereign currencies and immature banking services. By capturing underserved populations, Tether is further promoting the dollar while further decoupling the latter from the Federal Reserves’ monetary policy.

As USDT use and applications continue to gain steam, it is likely that its value will continue to grow alongside its network. This in conjunction with major advancements in blockchain’s underlying technology will continue to challenge the dollar’s — and the U.S.’ — financial and monetary hegemony.

As Tether continues to surge, it is expected that the U.S. will heavily scrutinize it by 2022. Nevertheless, it has already transformed global financial and monetary markets by creating new possibilities.

In recent years, Tether has been increasingly scrutinized by regulators, particularly regarding its stability and risks. According to documents filed with New York’s attorney general in April 2019, only about 74% of USDT supply is backed by the dollar, thus raising the question of a potential run. Moreover, Tether’s decentralized nature makes it more difficult to implement safeguards and mitigate against risks — a common challenge shared by many cryptocurrencies. For example, from 2018 to 2019, losses related to fraud and theft grew from $1.7 billion to $4.4 billion.

Thus, as pressure on the dollar continues to mount due to the U.S. economic downturn and mounting deficit, the U.S. may move to prohibit the use of USDT by all compliant entities registered in the country. Given that USDT is not registered in the U.S., this move might not kill Tether, but it would force the project to rely on an offshore dollar system while restricting its activities.

Moving forward, developing countries with weaker sovereign currencies will undergo accelerated dollarization as Tether, Libra and other stablecoins take over local markets. However, countries and regions such as China, the United Kingdom and the European Union will accelerate the development of native central bank digital currencies to better compete in the currency market of tomorrow.

Nevertheless, Tether has already transformed how millions approach money, banking and finances by offering a new system based on decentralization. Already, leading regions and countries are racing to develop and launch stablecoins to enter and compete in this new monetary market. In doing so, these sovereign-backed new assets and currencies could challenge the status of the dollar as a global reserve currency, thus weakening U.S. influence and bolstering domestic stability — an outlook shared by the U.K., EU and China.

On the other hand, other countries with relatively weak sovereign currencies may undergo dollarization due to stablecoins. Although Tether can mitigate U.S. monetary intervention, its presence in underserved markets may negatively impact national sovereignty and financial stability.

As demonstrated by Tether, stablecoins are paving an alternate path forward by chipping away at the dollar’s hegemony while also driving innovation. Already, China is pushing forward with Digital Currency Electronic Payment to promote digital yuan’s internationalization, while the U.K, Switzerland and the Netherlands are leading the development of a CBDC. Even the U.S. — despite its prior reluctance — is now discussing the possibility of developing a digital dollar. Thanks to Tether, we are now entering a new era of currency innovation — and competition — as the smart economy of the future looms ever closer.

Da Hongfei is most known for co-founding the blockchain-based “Smart Economy” network Neo with Erick Zhang in 2014. Da received his education at the South China University of Technology, receiving degrees in technology and English. He worked at a consulting firm until 2013, after which he learned how to code before founding Neo. Along with Zhang, Da also founded OnChain — a commercial blockchain firm that provides services to private companies.