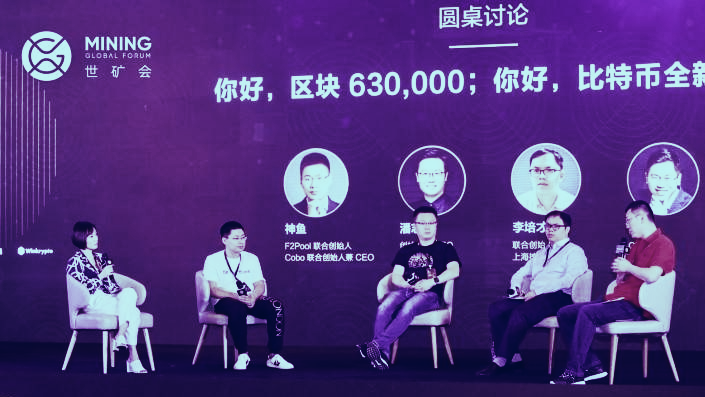 Every year in May, Chengdu, the capital city of Sichuan province, welcomes hundreds of crypto miners for a few days of intense networking during its Global Mining Forum. The premier event hosts mining rig producers and mining farm managers—and, increasingly, also asset managers and exchanges as they venture into the mining business.

This year’s conference, the first one since the Bitcoin halving last month, was  well-attended. Yet, it remains rather mysterious to outsiders, as many of us, including your correspondent, are dutifully quarantining at home. This week’s da bing takes a look at the Forum and teases out a few takeaways.

The attempted come back of CoinEx, China’s forked-Bitcoin exchange

The financialization of mining

Mining isn’t simply about buying rigs and finding cheap electricity anymore. Rather, the value chain has expanded to include financial services. Panel and keynote speakers aren’t simply Bitcoin veterans from mining pools and rig producers. Instead, a “new wave” of influencers come from companies that provide financing, hedging and derivative services to miners.

“The conference made it even clearer that financialization is an unavoidable trend in the mining sector,” Mable Jiang, Principle of Multicoin Capital, told me.  “Just look at FTX— they’ve launched a hashrate derivative trading tool that allows miners to hedge against mining difficulty.”

As Bitcoin halved, mining rewards declined, which forced some miners to come up with new ways to finance their operations. “Many mining farm managers are having a hard time recruiting this year,” said Molly Mo, who runs marketing at Hashkey Hub, a digital asset management platform.  “As small miners went out of business in recent months, big mining farms can’t meet their quota as easily because normally, small miners join forces with big miners to reduce costs.”

As business declines, mining farms have to improve their financing literacy in order to stay afloat.

Filecoin continues to be a hit

Despite the recent security loophole of Filecoin’s testnet, Chinese miners continue to stand behind the decentralized storage project. One conference attendee told me that “filecoin is everywhere.” Indeed, for those who are close to China’s crypto circle, the buying and selling of filecoin mining rigs has caught many people’s attention—and wallet. According to one report, there are more than 200 filecoin mining rig producers in China, selling over a billion RMB.

Institutional investors are just as interested in Filecoin as retail investors. During the Forum, T01475, a large and activist IPFS node (it was the one thast reported the recent security loophole, in fact)  received investment from HashKey Capital and Fenbushi. Both are OG crypto VCs in China.

The injection of new capital to thriving Chinese IPFS nodes is the latest example of a western blockchain product gaining momentum in China.

The real hotpot: mining, trading and financing, all in one

Chengdu is famous for its hotpot, so is the crypto sector. “Compared to a few years ago when only miners participated in the conference, this year, everyone went,” said Mo. The wide diversity of people from all sectors of the crypto industry who attended the mining forum reflects another big trend happening: everyone wants to do everything.

“Exchanges were everywhere during the Forum,” Jiang said, “ they have made a fortune from the trading side of their business, and are now pushing aggressively toward mining.”

In addition to exchanges, VCs—mainly Chinese— are investing in mining and laying out strategies to set up mining farms and serve miners. I’m told that many traditional investors who typically wouldn’t invest in mining farms directly, are doing so in recent months. Many Chinese investors have also gone abroad to North America to invest.

Why? Because mining is not only the top of the crypto value chain, it’s also one of the few verticals that consistently produces profits. It’s no wonder that one cannot understand crypto without understanding mining. And look nowhere other than Chengdu when you need a taste of the crypto hotpot.

#1. Hainan said it’s not a big fan of crypto, after all

After making a few headlines on its island-wide blockchain strategy, Hainan went quiet for a few months. Despite occasional news about the island testing yet another blockchain-enabled use case and developing local blockchain expertise, nothing ground-breaking has come out of the island.

This dilemma might last for a bit longer, as Hainan issued a statement further asserting its blockchain-not-crypto policy. In the new report, not only was “crypto“ never mentioned, the words “digital yuan” were also absent. It seems that Hainan wants to brush off any traces of virtual currency from its image.

The reason might be due to Hainan’s hesitation in firming up the island’s overall financial policy. Many have speculated about whether Hainan ultimately becomes an open island, in which the Chinese government will allow crypto exchanges to legally exist. So far though, despite the frequent and noteworthy visits of Huobi CEO Leon Li, the island still seems a ways away from taking crypto mainstream.

In Jan 2020, the government, with help from Chinese tech firms, started the China National Vulnerability Database, an open database of security loopholes. The project was a low-key affair, until June 3, when it announced its go-live date—and revealed a number of bugs that still need to be sorted.

The database listed 247 security loopholes, among which it deemed 60 as high risk, 173 moderate risk and 14 low risk. A closer look at the database reveals that the site not only includes security loopholes of random ERC20 tokens, but also crypto news, especially scams, collected from both domestic and international news sites.

The site might not be relevant to many but it does show China is keeping a close eye on the industry.

It’s rare that a week goes by in China’s crypto circle without some sort of scandal. This week, the center of the drama was Feng Wang, founder of Mars Finance, and his interactions with BlockVC, a crypto investment firm notorious for its shenanigans.

The short story is that Wang publicly accused BlockVC of manipulating investors (such as himself) into investing in a Binance IEO project called “Troy,” which performed poorly in 2019.

Yet, two days after last week’s attacks, Wang, using the most amicable language, issued a statement describing the “robust trust” between the two organizations.

Many speculated that Wang got part of his funds back from BlockVC and therefore backed off. The farce just showed clearly how manipulative crypto investment in China can be. As China struggles to recover economically from Coronavirus, prime minister Keqiang Li suggested the country revive the good old “street market,” where illegal vendors open up shops, literally on the roads. The goal is to stimulate the economy. As a result, crypto firms also went on the street, and participated in the movement. Many are directly selling crypto, others are advertising financial derivatives, wallets, company swag, or simply sitting on the street with a cardboard sign emblazoned with their company logos.