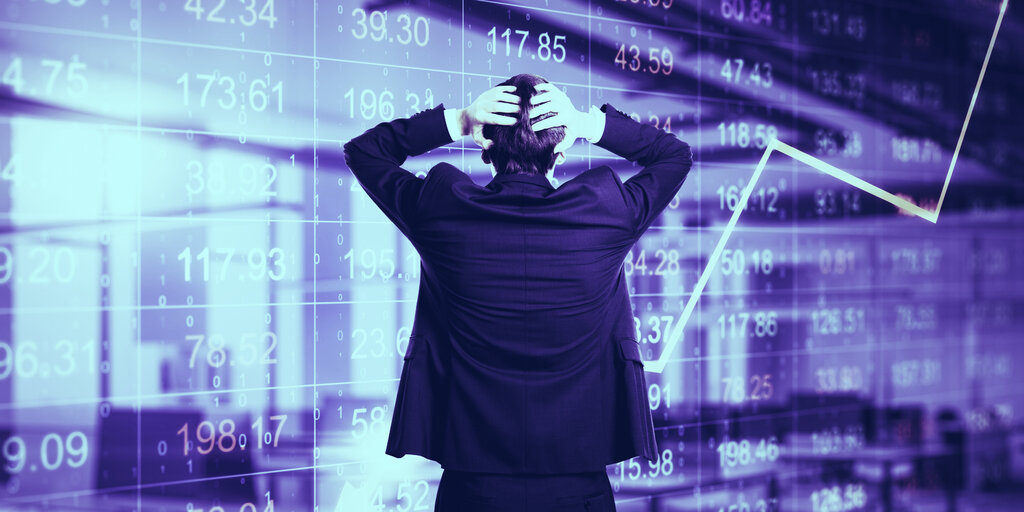 The stocks they are ‘a fallin’.

Following one of the strong market rallies in history, the global pandemic, mass domestic unemployment and widespread social unrest got the best of the US stock market today.

The Dow Jones opened 5.7% lower while the S&P 500 opened 4.8% lower, and the stock market closed the day with the Dow plunging nearly 1,800 points in one of its worst performance in a single day since Black Thursday, when global markets tanked amid uncertainty caused by the coronavirus pandemic.

All this could be disastrous for Bitcoin. A market crash could bring Bitcoin down with it—as happened in the middle of March, when Bitcoin’s price crashed by 40% in a matter of days.

Currently, it’s lost 5 percent of its price in the past 24 hours. (That’s peanuts by crypto’s standards—about a week ago, June 2, Bitcoin’s price fell by 8% in under five minutes).

Today’s flash crash could be the result of mounting concerns over a second wave of COVID-19 in the US. There are warning signs that the mass protests over systemic racism may have created fresh outbreaks; several hospitals have reported surges in new cases, and on June 6, the US recorded its highest number of new daily cases in over a month.

The total number of confirmed cases in the US today also passed 2 million, by far the highest in the world, according to data from Johns Hopkins University. The crisis has caused the Fed to pump trillions of dollars into the US economy in an attempt to kick it back into action. Today, the US hit $26 trillion in national debt, and it’s increasing at a rate of $1 trillion per month.

THOSE THAT DENY THEIR HISTORY ARE DOOMED TO REPEAT IT!

Some of those whose jobs depend on the strength of the cryptocurrency market told Decrypt that Bitcoin will bounce back from the crash—albeit one whose effects haven’t really been felt yet.

“I’m expecting the crypto market to fall as the scales tip to the side of the bears. BTC has been unusually flat for the last few weeks so i’d expect this move to be of some magnitude much like a coiling spring,” said Nicholas Pelecanos, Head of Trading at NEM.

“Whilst there are reports of an increased number of cases recently I personally feel it’s too early to call it a second wave,” said Simon Peters, a market analyst at social trading platform eToro. “Given we have been on a significant rally this pullback today may just be a ‘pause’, an opportunity for markets to breathe before potentially pushing higher.”

Adam Traidman, CEO of Bitcoin wallet BRD, said that a market crash could be good for stablecoins, since they let investors move money around the cryptosphere easily—indeed, stablecoin volume boomed like crazy in the mid-March crash.