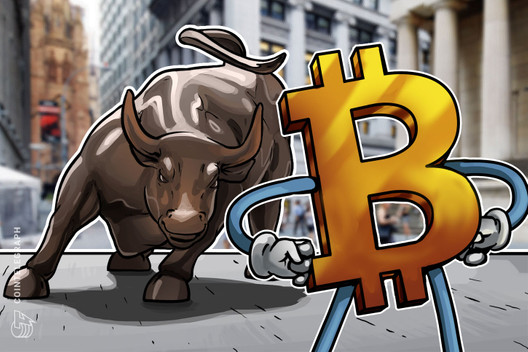 The Bitcoin price bulls and bears will be looking to tip the scales in their favor over the weekend as the bullish structure for BTC remains intact.

Bitcoin (BTC), the biggest cryptocurrency by market capitalization, is trading at $9,375 representing a 0.2% loss in value in the last 24 hours and the same for today’s session.

The wider crypto market is generally following Bitcoin, with Ethereum’s Ether (ETH) down around 0.27% and XRP underperforming but still relatively flat down less than 1% at $0.19 XRP. Meanwhile, Bitcoin dominance remains flat at 65% after a strong couple of weeks by the alts.

The 1-week chart for Bitcoin shows seven weeks of consolidation below the $10K handle — a price point that has been elusive support since September 2019.

Trading continues to take place above all key weekly moving averages (MA), with the 50 and 20-week MAs playing an important recent role in supporting price. While price remains above the 20,50,100 and 200 week moving averages, it is reasonable to describe the market as bullish while consolidating below resistance. Bitcoin is yet to print a higher high and turn 10K into support, which would be the indication that BTC/USD is in a bull market.

Overall, the volume has been decreasing as would be expected during bullish consolidation. The On Balance Volume (OBV) indicator, which can highlight where there is a deviation between volume and price action, shows the lack of higher highs. This is largely a consequence of the high volume sustained weeks of rejection when prices were below $8K.

A breakdown in the OBV while the price is maintained may be an indication of weakness, but this has not yet been seen and the lower volume consolidation appears to continue to favor the bulls for now.

Key support for Bitcoin could be expected around the yearly pivot and the 50 and 20-week moving averages, which are complemented by high volume interest at this level at around $8,150-$8,650.

Any breakdown for Bitcoin would most likely see this level as an important battleground, with the 100-week MA at $7,250 being the next level to look for since it was an important resistance level during the ascension from $4K.

Looking at the daily chart, it is easier to see that Bitcoin continues to apply pressure to $10K, with around four concerted attempts to break it, whereas price lows are generally higher lows.

As such, this is the longest consolidation for Bitcoin below $10K and is one that shares characteristics of a bullish consolidation triangle, which — if it played out — would imply a move to the upside towards $12,000.

Should the triangle break to the downside, there are the 200 and 100-day moving averages, both also in the key support area just north of $8K. As it stands, the 50-day MA is supporting the price, having been tested multiple times this week.

The 1-day volume emphasizes the recent volume drop off, but the OBV shows to also be putting in higher highs on the daily chart meaning that the bearish volume in the consolidation has been resolved by bullish consolidation.

The daily MACD shows a loss of momentum, which would be expected in a sideways consolidation but remains above zero. A break from this downtrend would be useful to detect the first sign of a momentum shift to the upside.

The 1-hour chart shows Bitcoin fighting with the 50-day moving average in an attempt to regain support with the main key area of interest being above at $9,550-9,600, which has been a support/resistance level for nearly the whole of June.

Reclaiming this level would be key and would most likely lead to another retest of $10K, which under the right complimentary circumstances, may be the last time the bulls need to knock on this door before a breakout. As such, this is the key objective for the bulls as the apex of the ascending triangle is traded within.

Fortunately for the bulls, there was a strong amount of buying interest at $8,900-9,000 when tested on June 15, which can be seen by the OBV, which is outperforming price action.

The pick up in price action noted above on Monday, came largely around the time that the Federal Reserve announced a furthermore aggressive ability to purchase up to $750bn of corporate bonds, providing liquidity and some comfort to investors in traditional markets, which saw an uptick across all the markets.

Bitcoin has been moving alongside the S&P 500 since the COVID 19 outbreak and despite the fall off during consolidation, the overall correlation remains relatively high at 76%. Bitcoin also shared some similar market moves to oil but more so towards the start of the market-wide collapse earlier this year. Bitcoin is inversely correlated to gold and was also this way during the drop earlier this year.

As such, it seems that Bitcoin is going to continue to behave as a risk-on asset as seen earlier in the week and particularly when the markets are at pivotal points.

The Federal Reserve appears to be happy in expanding the money supply through the purchase of corporate bonds and commitment to maintaining interest rates low, which in the long run, is good for Bitcoin. Increasing the dollar base overlaid on a decreasing inflation rate for Bitcoin is a basic economics equation that most investors expect to lead to higher prices assuming other things remain constant.

Moving into the weekend

Friday afternoon is normally a relatively volatile time period with positions being risk-managed for the weekend period. The bulls have the objective of reclaiming and sustaining $9,600. Whereas the bears will be looking to take advantage of any weakness and break below $8,900 would most likely open the door to test the lower levels of support around $8K.

Overall, from a technical point of view, the market remains in a bullish posture, above all key MAs but is consolidating below resistance. Turn $10,500 into support and $12K and beyond becomes a very real possibility. But, as mentioned, shorter-term price action remains largely at the mercy of the wider economy — particularly while Bitcoin consolidates on low volume.