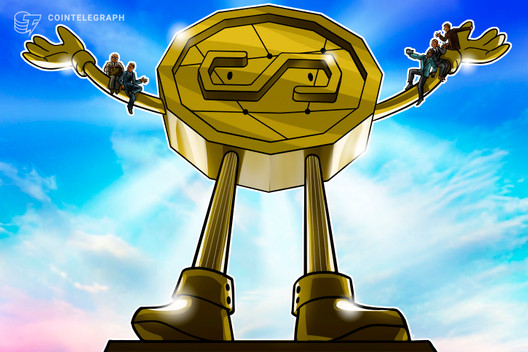 Despite stablecoins posting triple-digit market cap growth this year, competition from projects backed by major financial and tech corporations is on the horizon.

The supply of the Coinbase-backed stablecoin USD Coin (USDC) has grown by 250% since the start of 2020, including an 80% expansion in just the past two months.

After starting the year with a nearly $520 million market cap, USDC now ranks as the 16th-largest crypto asset with a $1.86 billion capitalization — beating out all other major stablecoins except for the $14.5 billion Tether (USDT) by at least four times.

Meanwhile, other stablecoins (most of which are pegged to the value of $1 US) have also seen significant growth this year, with DAI and Binance USD expanding by 970% and 800% respectively in 2020 so far.

However, the race is on for established stable tokens to consolidate market share before major financial institutions and corporations enter the fray with their own tokenized money.

On September 9, Fnality — a stablecoin project spanning 13 global banks that was spearheaded by UBS Group — predicted it will receive regulatory approval for its ‘UtilitySettlement Coin’ initiative by the second quarter of 2021.

The Fnality project has been in development for more than five years, and seeks to establish a network featuring tokenized US dollars, Japanese yen, Euros, Canadian dollars, and British pound sterling.

In July, the US Office of the Comptroller of the Currency (OCC) granted permission to federally chartered banks to custody crypto assets, further opening the door to the mainstream acceptance of stablecoins.

Central bank digital currencies are also on the horizon in China, the US and Europe and have the potential to one day wipe out demand for crypto stablecoins. On September 10, European Central Bank (ECB) President Christine Lagarde announced that the ECB will soon deliver a verdict on whether the region is in need of a digitized Euro:

“The Eurosystem has so far not made a decision on whether to introduce a digital euro. But, like many other central banks around the world, we are exploring the benefits, risks and operational challenges of doing so.”

In May, the Liechtenstein-based Bank Frick began accepting deposits in USDC.