Shill Metal Jacket: Who are the Link Marines? 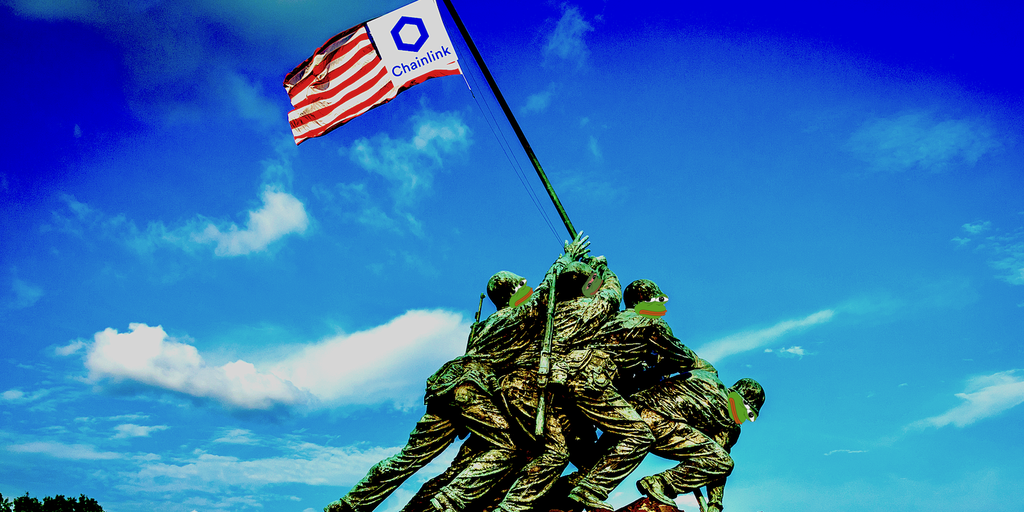 The fearless Link Marines are in the throes of yet another Great Offensive!

Acting under the able leadership of a high-ranking general known as “Chainlink God,” for weeks the Marines have been locked in combat with a cryptocurrency fund, Zeus Capital. In July it fired the first salvo by publishing a report that described Chainlink as “Crypto’s Wirecard,” and said it was shorting the company’s token to zero.

Link footsoldiers, organized through Telegram groups, sprang into action. They scoured the metadata on Zeus’s website and swiftly identified what they alleged to be foul play: Zeus Capital is secretly in cahoots with Nexo Finance, a recent Chainlink partner whom the Marines believe is planning a coup. The Marines doubled down on their offensive, hounding both companies with poisonous memes and explosive comments through the telecosm, exposing a web of alleged lies and deceit. (Zeus Capital could not be reached, but Nexo Finance denied the allegations, saying “the situation does not make much sense.”) “We have whole squadrons of breadcrumb finders, working around the clock, looking for whatever, looking through GitHub, link caches, hashtags,” Chainlink God told me, in a dispatch from the front lines. “It’s organized chaos.”

The Link Marines, Crypto Twitter’s most irritatingly omnipresent Elite Shilling Corps., soldier on. The grim war continues without surcease, with Zeus firing off another broadside, calling the Marines an “Army of Sheep” and Chainlink itself a Ponzi scheme…

And yet, could victory at last be at hand?

Where once the Link Marines were the downtrodden peasant guerillas of the crypto world, now they are poised to seize the “capital”—their beloved coin seems poised to take its place among the Top Five Cryptocurrencies by Market Cap. Though it has slumped during the past day, the token’s price rocketed from roughly $0.40 to $13—some 26% during its weekend offensive alone. Its trading volume on Coinbase recently surpassed Bitcoin. This is due in no small part to the efforts of the Marines, who have been waging a bloody, asymmetric information war for the hearts and minds of the cryptorati. It’s now impossible to scroll one’s feed without running into them engaging in some sort of byzantine technical debate, storming the mentions of users critical of their cause, retweeting anodyne token-propaganda about Chainlink.

The Link Marines believe the seven-year-old Cayman Islands-based company, whose technology acts as a bridge between blockchains and real-world data, is integral to building a “layer three” on the modern Internet—that is, a decentralized, censorship-free ecosystem of apps undergirded by the Ethereum network.

And Chainlink is catching on: Its technology is now being used in countless DeFi investment products, such as Kyber Network and Graph Protocol.

For the purpose of learning more, Decrypt was lucky enough to be granted an audience with that most decorated of Link Marines commanders — “Chainlink God” himself.

Who is Chainlink God?

I should disclose at this point that as a disgraced journalist covering the blockchain space full time for the vile Decrypt in mid-to-late 2019, I had my share of run-ins with the Link Marines. I hated them. Why did they always comment on my articles asking why I’d “failed to mention Chainlink,” as though theirs was the only story and everything had to feed back to it? Why did they devote so much blood and energy to defending a private company? Were they a cult? Paid employees? Russian ‘bots?

Perhaps the generalissimo, whom a Chainlink company spokesman referred me to, would provide an answer. (The company behind Chainlink is actually called “SmartContract”— Chainlink is the product.)

Chainlink God didn’t offer many clues as to his identity. His public Twitter profile wasn’t much help: He has 17,000 followers; his profile picture is an image of Pepe the Frog dressed as Santa Clause; his bio reads: “Chainlink Community Ambassador // Decentralized Middleware Realist // Opinions are my own, derived from in-depth research and due diligence.” When I reached out to him I didn’t know if he was a 60-year-old trucker from the midwest, a Japanese teenage girl, a registered Wisconsin sex offender or perhaps an XRP cutout. I still don’t.

“But that’s sort of the point,” he told me, in his affable, American way. “I can be whatever you want me to be—a frog, cat, whatever.”

“I don’t see Pepe as an inherently racist thing or really standing for anything,” CG said. “I see him as a blank slate on which you can express yourself however you want.” Besides, he added, pseudonymity is part of the culture, for “security reasons—I own a lot of Chainlink, which could put a target on my back.”

Here are some of the other, scant details this high-ranking Link Marines Corps officer offered:

Recruitment into the Link Marines

CG said he fell into the community as many others did: Via 4chan’s infamous “/biz/” forum, notorious for its users’ withering put-downs of nascent cryptocurrency products.

“It’s a trial by fire—they would tear a project apart and find all of its flaws,” he said, recalling the glory days of 2017. “They did that for Chainlink, and it was the only project that came out alive.”

The early 4chan Chanlink community was nurtured into existence by a mysterious “Q Anon”-like user named “Assblaster.” Though Chainlink God never actually met him, Assblaster was legendary, “knew a lot about Chainlink and understood it, and dropped a lot of the crumbs and got a lot of people into it.”

Assblaster was vague in his first posts, in 2017. He evinced an air of worthy paranoia, giving hints of high level access to an as-yet unidentified coin.

“I don’t think you understand,” he wrote in one early post. He indicated that even giving the name of the token that would be Chainlink “would literally be illegal for me to do, not to mention career ruining … crypto is unregulated so corporations have to make us sign iront [sic] tight contract to the point where if I even fart and it sounds like this coin I’ll get sued.”

CG fondly recalled his own introduction to Assblaster’s writings. The sage had posted a 17-page document packed with insidery gossip. “It was the maximum dose of Chainlink I could’ve gotten,” Chainlink God said.

Having gotten the ball rolling, the mysterious Assblaster has since mysteriously disappeared from view.

Said Chainlink God: “He’s a part of the history.”

Chainlink God’s rise through the ranks

CG began his own journey by doing meticulous research and presenting it online: The other day, when we spoke by mobile, he had just posted a half-hour long read on Medium. It was a month in the making, entitled, “A Comparative Analysis of Band Protocol and Chainlink.”

Gradually, Chainlink God became a powerful figure in his own right and commanded the attention of thousands of followers. His works are regarded as seminal, particularly, “Scaling Chainlink in 2020,” a classic among Chainlink scholars.

The influence can be a burden. “Now I’m a figurehead,” he said. “Everything I say will be taken as gospel.” Virtually any of his tweets is liked or retweeted hundreds of times.

He is now, unquestionably, one of the Corps’s most high-ranking officials. He reserves “Five-Star General” status for Sergey Nazarov, Chainlink’s inventor, but acknowledged that he has a lot of influence, and that he plays “dad” to many of the Link Marines.  (At his side, inspiring the lads in the trenches, are fellow commanders FinRekt and CryptoOracle.)

The Marines actually have semi-official “ranks” based on token holdings, running the usual gamut from private to corporal. Formally, and mixed metaphorically, CG is a “Chainlink community ambassador,” he said.

“I’m the glue between Chainlink and the Marines,” he said. “I keep everyone in line, keep them respectful and what not. I don’t exactly tell people what to do — it’s more about setting an example.”

His role in the present war, for instance, has been pivotal. It was he who did much of the research deployed in the effort to discredit Zeus Capital. Yet he stresses equanimity, and strives to set “a research and data approach instead of blindly shitting on things,” he said. “Be respectful, be honest, tell the truth — and the evidence and the facts will be … self-evident.”

“Sometimes I’ll DM people and be like, ‘Chill dude!’” he added. “But I won’t call them out in public. That’s not really good and that’s not what I’m here for.”

Does he have other hobbies? “I watch Netflix, play video games,” he began. “But nope, mostly Chainlink.”

CG is aware that the men under his command can sometimes react excessively. Take, for instance, the Marines’ unofficial motto, “Didn’t Read, Not Selling,” which is applied to anything critical. Or the bombardment of Nexo Finance’s head of digital asset research, Simeon Rusanov, who “is currently being unjustly harassed by the LINK ‘marines’ and is seriously distressed,” according to a spokesman. Or their eternal abuse of hapless Twitter pundit Mike Dudas, who, as the one-time CEO of an obscure cryptocurrency trade publication, had the temerity to not feed Chainlink propaganda into every single article.

The Marines’ zeal has led to various scurrilous accusations: Namely, that they’re bots and paid Chainlink staffers. CG insists that the operation is mostly above board (a few bots did manage to infiltrate, a couple years ago), that the troops are real people ranging between his age and “70,” and that “a lot of people in this community are really … passionate.”

He claims to be a fair though occasionally vengeful Chainlink god. When he spots a poorly researched tirade against his beloved, as with the Zeus Capital drama, he will first laugh, derisively. But then, a swell of anger rises in his gut, and a synaptic twitch from brain to fingertip sends him tweeting words of war. “It’s funny, but also incredibly frustrating,” he said. “Really frustrating.”

And then, there is only so much he can do to hold back the dogs of war as his troops pile into the mentions of whomever he has marked for death…

From his perspective, it is a righteous anger. Sure, shilling the company will improve its prospects, and the price of its token. Yet he sincerely believes that Chainlink is the wave of the future, that he is playing a part in a revolution that will eventually see an “interconnected future in which all of finance is mediated through a decentralized, blockchain-based web layer, with Chainlink as the middleman at the centre of an ecosystem of new applications.”

Of course, he added, “anyone who says they’re not in it for the money is lying.”