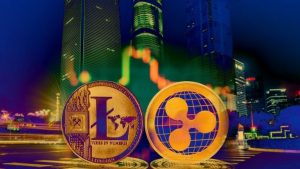 There is a community capitulation going on.

While price and price predictions dominate, the number of traders at different Telegram groups continue to shrink as prices correct from their all-time highs.

Of note, the number of traders subscribed to Ripple and Litecoin groups have dropped by over 60 percent in the last two years.

Effects of the Crypto Winter?

Between June 2018 and April 2020, it was observed that Litecoin shed 67 percent of their Telegram subscribers while Ripple saw a 63 percent plunge.

But it came as no surprise. Within the same period, asset prices plunged from their all-time highs. By June 2018, most assets had lost over 40 percent of their Dec 2017 peaks.

Aside from government interventions and the bubble popping as BTC slid from 2017, the investor community were apprehensive, keeping their cards close to their chest, with some giving up as crypto projects that had rallied in Dec 2017 were discovered to be scams.

This disillusionment and discouragement from the rapid drop in asset prices could explain why the number of Telegram subscribers fell by over 50 percent by the November 2019.

Trading is a numbers game and heavily influenced by profitability. It’s emotional for newbies.

When traders are making money and the markets is moving in one direction, it is easy to convince users to subscribe to various trading social media channels or Telegram groups. This is all thanks to the air of optimism and the expectations that the market will trend in one direction forever.

At peaks, it was easy for crypto analysts to make outrageous predictions. Specifically, John McAfee said BTC will soar to over $1 million a piece by the end of 2020.

He has quickly retracted his prediction saying he only made the prediction so that more users can join the movement and invest in cryptocurrencies.

The sharp decline in the number of Telegram subscribers throughout 2019 and 2020 concludes that many bailed out, accepting to cut their losses and focus on other crypto assets.

This was amid a series of hacks, lack of experience and education in handling crypto by some traders who got in because of FOMO, and government intervention banning ICOs which closed liquidity taps into the space.

However, the drop in XRP and Litecoin prices could be because of the continuous consolidation of XRP and LTC prices over the years. When both peaked, the losses over the years were equally steep and another reason for cutting losses.

Worse, for XRP holders, during this period, there were claims of Ripple, the majority owner of XRP, dumping on users. This discourages trading and could explain the decline.