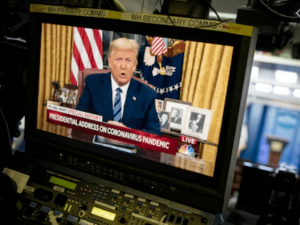 “This is not a financial crisis, this is just a temporary moment in time that we will overcome as a nation and a world.”

While Trump expresses optimism in his speech, the diplomacy cannot be missed; the virus has spread across the world. The situation in way worse in Europe, Italy is in a complete shutdown which now reports more than 12,000 cases. Spain, France and Germany report around 2,000 cases as well.

The 15-minute chart of gold and Bitcoin also reveal that the fear spread across the investment market. The world economy is heading towards a recession.

According to Charles Edwards, the founder of capriole.io, a digital asset management firm and prominent analyst notes in his report,

It is no doubt that Bitcoin, in general can be termed as a ‘risky asset.’ The volatility and its small market capitalization compared to other traditional financial assets makes it quite vulnerable. Moreover, he added that halving along with recessionary risk will increase the ‘stress’ on the miners, especially medium and small scale. Alex Kruger, an economist and crypto expert tweeted,

Time to pay attention. Bitcoin is trading like a risk-on asset. Not a safe haven, but the exact opposite. Following stocks down – although ironically stocks are the ones trading like low quality shitcoins.

During the last great recession of 2008 caused by the collapse of the housing market, the price of stocks dipped nearly 50%. Furthermore, gold also dropped considerably during the peak of the recession.

Nevertheless, the extend of the drop was limited, hence, a safe haven. Bitcoin had a positive correlation with gold during the first half of 2019. However, more recently it has traded like a ‘risk asset’ asset along side stocks. Hence, the recession fear in the markets are now threatening another bear market.

Do you think that recession is due upon the world? Please share your views with us.