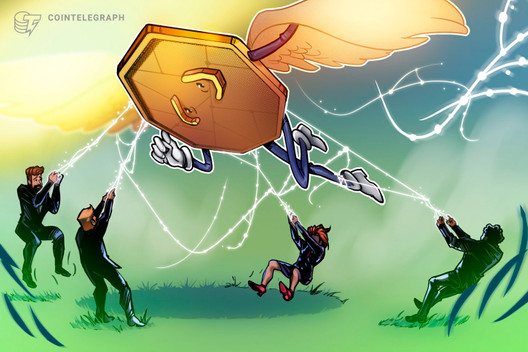 Securing seed money for blockchain startups is a tricky business in normal times, but with a pandemic raging, it’s really touch-and-go. Private investors have been walking away from startup deals lately, looking to conserve working capital in uncertain economic times. But fortuitously, governments and government-like entities have been rushing in to fill the gaps.

Richard Fetyko, founder of altFINS — a blockchain startup that enables crypto investors to screen, analyze and trade digital assets across exchanges — told Cointelegraph that he had an investor lined up to provide development and launch funding for the platform, “but then Covid rolled in.” The investor, experiencing liquidity problems in his core real estate business, effectively pulled out days before a contract was to be signed.

Eventually, altFINS was able to find new funding through VC firm Crowdberry, which was partnering with the Slovakian government’s sovereign fund, Slovak Investment Holding. Some governments seem to recognize that “supporting startups is an important stage in economic development — and that it will eventually be reflected in the economic growth rate,” Fetyko told Cointelegraph.

There are tradeoffs for the startup, of course. Crowdberry’s valuation of altFINS was 7% less than the aborted deal’s earlier valuation, but that had less to do with private versus public funds than it did the upheaval caused by the pandemic, said Fetyko. However, the startup received $1 million in capital, which was twice the number it was offered by the first VC firm.

Jean-Marc Puel, senior partner at LeadBlock Partners — a VC firm focused on European enterprise blockchain startups — told Cointelegraph: “Public funding in a time of crisis is a big plus, especially when access to private capital is drying up.” He added:

“This applies across the startup ecosystem, not only to the blockchain ecosystem. I see public capital and private capital as complementary in a start-up funding journey. On top of COVID-related support, public capital is currently a catalyst to boost early stage investments in blockchain startups.”

Speaking about VC deals in general, Michal Nespor, partner at crowdinvesting platform Crowdberry, told Cointelegraph: “The Covid-19 crisis accelerated the withdrawal of traditional VC funding from riskier [funding] phases or new deals.” This has created an opening for those investing public capital — as well as private funds, he added. “We see increasing deal flow from companies who had an offer from traditional VCs which were put on hold or withdrawn after the break-out of the pandemics.”

Fetyko told Cointelegraph that he expects to see more publicly funded VC firms working with blockchain startups. “It’s an ongoing trend in Europe,” and not just in Central and Eastern Europe, as was recently reported. The European Commission’s European Innovation Council, for instance, has a large allocation for startups, including those in Western Europe, he said.

But the movement toward publicly funded VC firms is less pronounced in the United States where VC funds have been around longer, are better connected and are more strongly capitalized. “Various programs have been created to support early stage investing in Europe,” said Fetyko. Things may be different in the U.S., which has a longer-standing, larger VC infrastructure. Nespor added: “As a general rule, we see less-developed capital markets, such as central and eastern Europe, as likely to be nurtured by public capital.” This is largely a consequence of the lack of private capital “appetite” for the VC risk-return type of investments in such countries.

The idea is to “support projects like ours,” added Fetyko, who cautioned that “this is not free money.” There is an equity allocation, which dilutes the founders’ equity, and the platform and its public partners expect a positive return on their investment.

There is more scrutiny and required transparency with government-funded VC firms, too. “They can request financials at any time,” said Fetyko. They can inspect contracts with the startup’s outside contractors, for instance, “and they can come into offices unannounced and review documents.” A privately funded VC firm also expects quarterly and additional reporting, but it isn’t as intrusive overall.

Many still believe, too, that the advice and talent level in large, traditional VC firms is likely better. But Nespor believes that “there are examples of well-run and successful publicly backed VCs with partial provision of private capital in Europe.”

“No. I would bet that you can’t find a single government VC who can outperform my team. They would do better to just pay the fee and carry and put their money with us.”

But with private VC funds drying up in parts of the world — like in Central and Eastern European countries — amid the COVID-19 crisis, it can be argued that public capital can help plug the gaps through entities such as the European Investment Fund. But according to Draper:

“I always believe in getting any group to be able to fund startups. But the private sector, if not regulated out of existence, should be making the investment decisions. Big government managed funds-of-funds have done okay, but when governments go after investing in individual startups, they make decisions by committee and are usually a disaster. Governments taking the role that the private sector should play usually leads to crony socialism.”

According to Fetyko, while altFINS’ funds were ultimately provided by the government of Slovakia, it was VC firm Crowdberry that was actually selecting the startups that would be funded, and only about 5% were eventually supported.

Puel doesn’t view public funding of blockchain startups as a long-term solution for a prosperous blockchain industry, however. He stated: “The sector cannot rely on public funding to thrive and will have to attract the larger pools of private capital.”

Elsewhere, blockchain funding via initial public offerings is now getting more attention with deals that are more transparent and better in terms of the quality of the underlying assets, noted Nespor, though this is not ideal for every business model. Community funding is gaining traction for business-to-customer business models, while “high tech plays and B2B models are more likely to remain in very specialized VC hands.” Regarding IPOs specifically, Puel told Cointelegraph:

“Funding dynamics for blockchain start-ups are no different from the rest of the tech ecosystem. Private venture capital remains the preferred funding option to support the growth of start-ups, their product development and/or geographical expansion. As the blockchain ecosystem matures, we will certainly see a rising number of blockchain start-ups looking to raise capital through IPOs.”

All in all, given the liquidity pressures on traditional VC firms as a result of the coronavirus pandemic, we might expect to see more public capital for early stage blockchain enterprises, particularly in undercapitalized parts of the world. “Especially in the seed phase of companies — the riskier development phase of a company — we expect more public funding to be available as opposed to private funding post coronavirus,” Nespor told Cointelegraph.

And while publicly funded VC firms sometimes lack the expertise and contacts of traditional Silicon Valley firms — and also demand more financial scrutiny — they can often compensate by offering repetitive, patient capital. Also, it’s too early to tell if public money is more stable, Fetyko told Cointelegraph, adding that he hopes the investor will be available again when the need for the next capital round emerges.