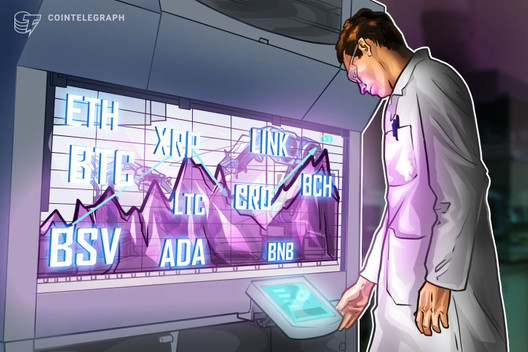 Many altcoins could pick up momentum If Bitcoin and Ethereum break above key resistance levels in the coming days.

Since March central banks have been printing money aggressively in order to combat the economic downturn brought about by the coronavirus pandemic.

Philip Lowe, the governor of the Australian Reserve Bank, has warned against the consequences of unlimited monetary expansion. Lowe said that “there is no free lunch,” and somebody always has to pay for the money printing “in one form or the other.”

The European Union has also agreed on a massive recovery fund of about $857 billion to buoy the social and economic crisis caused due to the coronavirus pandemic. In response, gold again broke out to a new yearly high, which shows that with every new announcement of a stimulus, investors are piling on gold.

Most investors buy gold because they are looking for a way to preserve their wealth against the devaluation of fiat currencies. However, as gold continues to climb, investors might start looking for other assets where they can find considerable value. This is when Bitcoin (BTC) could come into greater focus.

The next bull run in the top-ranked asset on CoinMarketCap is likely to be a sustained up-move, unlike the vertical rally seen during the previous bull market in 2017. Hence, crypto investors should be patient with their holdings.

Bitcoin (BTC) broke above the moving averages with a large range move on July 21, which suggests that some bulls are buying aggressively. If they can push the price above the immediate overhead resistance at $9,500, several traders waiting on the sidelines are likely to jump in.

The ascending triangle pattern is still intact, which will complete on a breakout and close (UTC time) above $10,376.38. This pattern has a target objective of $11,870.50.

Contrary to the assumption, if bulls fail to propel the price above $9,500, the BTC/USD pair might again drop to the trendline of the triangle. A break below this support will invalidate the bullish pattern and could result in a drop to $8,800.

The first target is a rally to $288.599, which might act as resistance but if the bulls can clear this hurdle, the second-ranked cryptocurrency on CoinMarketCap is likely to extend the rally to $366.

Conversely, if the bulls fail to propel the ETH/USD pair above $254.556, a few more days of range-bound action is likely. The trend will turn in favor of the bears if the support at $216.006 gives way.

The bears again tried to sink XRP below the moving averages on July 20 but the bulls purchased the dip to the 50-day simple moving average ($0.19), which shows accumulation at lower levels.

Currently, the bulls are facing resistance at the downtrend line but if they can scale the price above it, the fourth-ranked cryptocurrency on CoinMarketCap could start its journey towards the next target of $0.214616.

The XRP/USD pair is showing first signs of forming an inverse head and shoulders pattern, which will complete on a breakout and close (UTC time) above the neckline at $0.21.

Contrary to the assumption, if the pair turns down from the current levels and plummets below $0.188499, a drop to $0.17 is possible.

After staying close to the $217.55 levels for the past few days, Bitcoin Cash (BCH) bounced on July 21, which shows some accumulation closer to these levels. However, the bulls are facing resistance at the moving averages.

If the bulls can push the fifth-ranked cryptocurrency on CoinMarketCap above the moving averages, a move to $246 is possible. The bears are likely to defend this level aggressively.

If the price turns down from this resistance, the BCH/USD pair could remain range-bound between $217.55 and $246. The flat moving averages and the relative strength index close to the midpoint also support this view.

A break above $246 could shift the advantage in favor of the bulls while a break below $217.55 might indicate that the bears have the upper hand.

The failure of the bears to capitalize on the break below the $170 support on July 19 and 20 attracted buying from the aggressive bulls who pushed Bitcoin SV (BSV) above the downtrend line on July 21.

Now, the onus is on the bulls to make use of this opportunity and carry the sixth-ranked cryptocurrency on CoinMarketCap to the overhead resistance of $200. Above this level, a move to $227 is possible.

Instead, if the bears again sink the price below the downtrend line, a drop to $170 is likely. Both moving averages are flat and the RSI is close to the midpoint, which suggests that the range-bound action is likely to extend for a few more days.

Cardano (ADA) bounced off the 20-day exponential moving average ($0.116) on July 21, which is a positive sign as it shows that the bulls are buying the dips to strong support levels because they expect the uptrend to resume.

A breakout and close (UTC time) above the pennant and the $0.1380977 resistance will signal the possible resumption of the uptrend. The seventh-ranked cryptocurrency on CoinMarketCap can then rally to $0.173 and above it to $0.20.

In this leg of the up move that started on April 22, the pullbacks to the 20-day EMA have worked as a good entry point to the bulls.

Litecoin (LTC) broke above the 20-day EMA ($43.13) on July 21, which shows that the bulls are trying to make a comeback. The first sign of strength will be a breakout and close (UTC time) above $46 and the momentum is likely to pick up above $51.

If the bulls fail to propel the eighth-ranked cryptocurrency on CoinMarketCap above $46, the bears will make another attempt to drag the price to $39. A break below this support could start a new downtrend.

Currently, both moving averages have flattened out and the RSI is close to the midpoint, which suggests that the LTC/USD pair might extend its stay inside the range for a few more days.

Crypto.com Coin (CRO) is facing resistance at $0.1462 but the bulls do not seem to be in a hurry to book profits, which has resulted in a tight consolidation, instead of a pullback to the 20-day EMA ($0.138).

There is a small ascending triangle that has formed, which will complete on a breakout and close (UTC time) above the overhead resistance at $0.1462. The pattern target of this setup is $0.15416.

However, if the ninth-ranked cryptocurrency on CoinMarketCap fails to breakout or sustain above $0.1462, it could result in profit booking that could drag the price down to the 20-day EMA. A break below this support will signal a deeper correction to the 50-day SMA ($0.124).

Chainlink (LINK) is currently attempting to bounce off the 20-day EMA ($6.9). Although the bulls purchased the dip to this level on July 21, the rebound was not very encouraging because the bulls could not sustain the higher levels, which suggests that the bears are selling on minor rallies.

If the tenth-ranked cryptocurrency on CoinMarketCap plummets below the 20-day EMA, it will signal a deeper correction. The next support on the downside is the 61.8% Fibonacci retracement level of $6.3298.

The first sign of strength will be a breakout and close (UTC time) above the downtrend line. This will indicate that the short-term correction might be coming to an end. The next uptrend is likely to start after the LINK/USD pair breaks out of $8.9080.

Binance Coin (BNB) is facing stiff resistance at the $18.20–$19 zone but the positive thing is that the bulls have not allowed the price to sustain below the 20-day EMA ($17.23), which indicates demand at lower levels.

The 11th-ranked crypto-asset on CoinMarketCap had formed an inside day candlestick pattern on July 21, which suggests indecision among the bulls and the bears. However, with the 20-day EMA sloping up and the RSI in the positive zone, the advantage is with the bulls.

They will make another attempt to scale the price above the resistance zone. If successful, the BNB/USD could start a new uptrend that can reach $22.93 and then $24. There is a minor resistance at $21.50 but that is likely to be crossed.

Contrary to this assumption, if the bulls again fail to push the price above the $18.2–$19 zone, it could attract profit booking from the short-term bulls, which can result in a break below the moving averages.