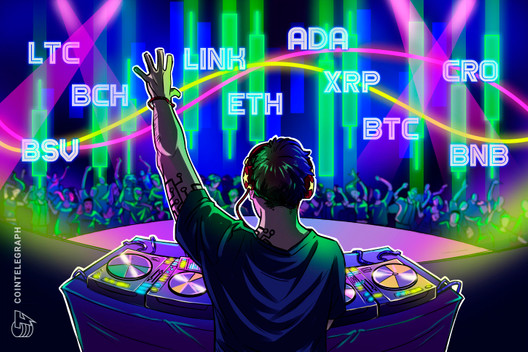 Select altcoins are showing strength and if Bitcoin price perks up a fast paced, market-wide rally could occur.

The People’s Bank of China (PBoC) is rumored to be working with food delivery giant Meituan Dianping and ride-hailing application DiDi to test the digital yuan. Currently, Meituan Dianping is estimated to have more than 435 million users.

Video streaming platform, Bilibili, could also be the next to join the project. Although the PBoC has not committed to a specific launch date, the coronavirus pandemic seems to have accelerated the project.

Following China’s progress on the central bank digital currency, Japan has also expedited its efforts to launch a digital yen. The Japanese government could add the development of the CBDC to the Honebuto Plan, which is the basis for Japanese economic and fiscal policy.

After these two nations launch working models of their CBDC projects, it is likely that other  countries will follow suit.

As reported earlier this week, Bitcoin’s (BTC) realized volatility has dropped to a three-year-low, hence, in the short-term, both the U.S. equity markets and gold might outperform the top-ranked asset on CoinMarketCap.

However, every low volatility period is usually followed by a volatility expansion. This means when the next trending phase starts its strength is likely to surprise the traders.

Bitcoin (BTC) has been hovering close to the 20-day exponential moving average ($9,259) for the past few days and the relative strength index has flatlined, which suggests that both the bulls and the bears are waiting for a trigger to make the next move.

Without a trigger, the bulls might find it difficult to push the price above the stiff overhead resistance zone of $10,000–$10,500. If the price turns down from this resistance zone, the BTC/USD pair might remain range-bound for a few more days.

However, with a strong trigger, the pair might rally above the overhead resistance zone and a new sustained uptrend is likely.

On the downside, a break below the trendline of the ascending triangle will signal advantage to the bears. However, without a strong trigger in their favor, the possibility of a break below the critical support at $8,130.58 is low.

A break above $253.556 will be the first indication that the bulls have overpowered the bears as they are confident of a possible rally to $288.599. If the momentum can clear this resistance, the second-ranked cryptocurrency on CoinMarketCap can rally to $320.

However, if the ETH/USD pair does not bounce off the current levels within the next few days, it could result in a break below the moving averages. If that happens, the pair can drop to the critical support at $216.006, which is likely to be defended aggressively by the bulls.

The bulls could not sustain the strength in XRP on July 13, which suggests hesitation at higher levels. However, the bulls have not allowed the price to dip below the moving average, which is a mild positive.

If the bulls can carry the fourth-ranked cryptocurrency on CoinMarketCap above $0.214616, the uptrend is likely to resume with a target objective of $0.235688.

The 20-day EMA ($0.192) is sloping up and the RSI is in the positive zone, which suggests that the bulls are in command.

This bullish view will be invalidated if the bears sink the XRP/USD pair below the moving averages. Such a move can again pull down the pair to $0.17.

Bitcoin Cash (BCH) broke below the moving averages on July 13 and is now likely to correct to the immediate support at $217.55. If this support holds, the altcoin could remain range-bound between $217.55–$246 for a few days.

However, if the bears sink the fifth-ranked cryptocurrency on CoinMarketCap below $217.55, a drop to the next support at $200 is possible. If this support breaks down, a new downtrend is likely.

Cardano (ADA) is facing resistance at the current highs of $0.1380977 but the bears have not been able to sink the price below $0.12, which shows strong buying by the bulls on dips.

The uptrend remains strong with both moving averages sloping up and the RSI in the overbought territory. This suggests that the path of least resistance is to the upside. On a break above $0.1380977, the first target is $0.173 and then $0.20.

Contrary to this assumption, if the price turns down from $0.1380977, the sixth-ranked cryptocurrency on CoinMarketCap might remain range-bound between $0.11–$0.1380977 for a few days. A break below $0.11 will be the first sign that the current uptrend is weakening.

Bitcoin SV (BSV) has failed to bounce off the 20-day EMA ($177), which shows a lack of demand at higher levels. If the altcoin does not rise from the current levels in the next few days, the possibility of a break below the 20-day EMA increases.

If the bears sink the seventh-ranked cryptocurrency on CoinMarketCap below the 20-day EMA and the $170 support, a drop to $146.20 is possible.

Conversely, if the BSV/USD pair rebounds off the current levels, the bulls will try to carry it to $200 and a break above this level can result in a move to $227.

The moving averages are flat and the RSI is just above the midpoint, which suggests a balance between supply and demand. Therefore, the pair might remain in a tight range for a few more days.

As suggested in the previous analysis, the bulls defended the 38.2% Fibonacci retracement level of $7.0023, which is a huge positive. This suggests that the bulls are not waiting for a deeper correction in Chainlink (LINK) to establish fresh positions and the uptrend is intact.

The bears are currently attempting to defend the overhead resistance at $8.48 but if the bulls can sustain the price above this level, the eighth-ranked cryptocurrency on CoinMarketCap is likely to rally to $10.

However, the RSI is deep in the overbought territory, which warrants caution. If the LINK/USD pair struggles to sustain above $8.48, it might enter a few days of consolidation or a minor correction.

Litecoin (LTC) again failed to break above the immediate resistance of $46 on July 13, which shows that the bears are aggressively defending this resistance. Repeated failure to break above a resistance usually attracts profit booking from the short-term bulls.

The ninth-ranked cryptocurrency on CoinMarketCap has dropped close to the first support at $42.50. If the price bounces off this support, the bulls will make another attempt to clear the overhead resistance at $46.

However, if the $42.50 support cracks, a drop to the critical support at $39 is possible. The flat moving averages and the RSI just below the 50 level points to a balance between both the bulls and the bears.

The next trending move is likely to start on a breakdown below $39 or on a breakout above $51. Until then, the range-bound action is likely to continue.

The bears could not sustain the breakout above $18.20, which shows a lack of demand at higher levels. However, if Binance Coin (BNB) rebounds off the 20-day EMA ($16.94), the bulls will make another attempt to push the price back above $18.20.

If successful, the tenth-ranked crypto-asset on CoinMarketCap can rally to $21.50 and then to $22.93.

The 20-day EMA is gradually sloping up and the RSI is in the positive zone, which indicates that bulls have a slight advantage.

This view will be invalidated if the bears sink the BNB/USD pair below the 20-day EMA. In such a case a drop to the trendline of the ascending triangle is possible.

In a strong uptrend, the pullbacks usually last between one to three days. After correcting for three days, Crypto.com Coin (CRO) is attempting to resume the uptrend. A break above the recent high of $0.146157 will confirm a new move higher.

The next target objective on the upside is $0.15306 and if that resistance is crossed, the 11th-ranked cryptocurrency on CoinMarketCap can rally to $0.20. Both moving averages are sloping up and the RSI is in the positive territory, suggesting advantage to the bulls.

Contrary to the assumption, if the bears defend the $0.146157 level aggressively, the CRO/USD pair can turn down and dip to the 20-day EMA ($0.133). A break below this support will be the first sign that the momentum is weakening .