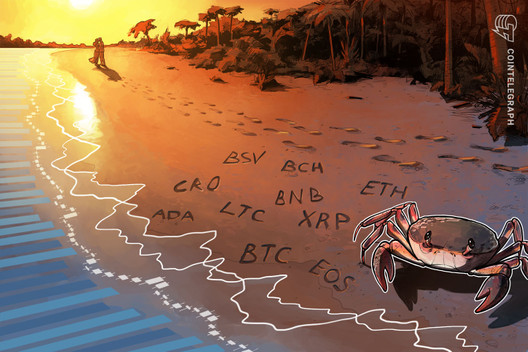 A few major cryptocurrencies are close to breaking below their critical support levels, indicating further downside in the next few days.

Coronavirus cases are jumping across the world as nations reopen their economies and this raises the risk of a second wave which could slow down the current recovery in major markets. Global debt levels are already at astronomical levels but it seems safe to assume that a resurgence in cases will result in central banks pumping more liquidity into the markets.

OKEx CEO Jay Hao recently said that Bitcoin (BTC) rallied about 58% from $6,580 to $10,400 after the first stimulus bill was signed in late March. There are also expectations that the Trump Administration may announce a second $1 trillion stimulus package.

If this happens, Hao believes that a portion of funds from investors will re-enter Bitcoin as institutional investors “spread their risk across risk and haven assets.”

Even if institutional investors park roughly 1% of their money in the top-ranked cryptocurrency on CoinMarketCap, this could result in an inflow of about $480 billion. According to Messari researcher Ryan Watkins, this fresh influx could boost “Bitcoin’s market cap above $1 trillion, or over $50,000 per BTC.”

This suggests that the long-term prospects for Bitcoin are strong, hence, any weakness can present an opportunity to buy at lower levels.

Bitcoin (BTC) showed promise on June 22 but the rally fizzled out at $9,795.06. This suggests that a huge wall of sellers is defending the $10,000–$10,500 resistance zone. The price turned down sharply and plunged below the moving averages today.

The repeated failure of the bulls to break above the resistance zone could attract long liquidations from short-term traders. If the bears take advantage of this and sink the price below the trendline of the ascending triangle, a drop to $8,638.70 and below that to $8,130.58 is possible.

Alternatively, if the price rebounds off the trendline of the triangle, the bulls will make one more attempt to push the price to $10,000 levels.

Ether (ETH) turned down from just under the overhead resistance of $253.556 today, which suggests that bears are defending this level aggressively. This could keep the biggest altcoin range-bound between $225.783 and $253.556 for a few days.

The flat moving averages and the relative strength index just above the 50 level also suggests a balance between supply and demand.

Conversely, if the ETH/USD pair rebounds off the 20-day exponential moving average ($224), the bulls might make one more attempt to push the price above $253.556. If the price sustains above this level, the uptrend is likely to resume.

XRP has broken down from the support line of the symmetrical triangle. If the bears can sustain the price below the triangle, a new downtrend is likely.

The downsloping moving averages and the failure of the RSI to even reach 50 level suggests that bears have the upper hand. The pattern target of this breakdown is $0.124412.

This bearish view will be invalidated if the fourth-ranked cryptocurrency on CoinMarketCap reverses direction and rises above both moving averages. However, the possibility of such a move looks bleak.

The bears will now try to sink the fifth-ranked cryptocurrency on CoinMarketCap to $217.55. This level has been holding up well for the past several days, hence, the bulls are likely to defend it aggressively once again.

A bounce off $217.55 will keep the BCH/USD pair range-bound between $217.55–$255.46 for a few more days. Both moving averages are flattish and the RSI has been oscillating between 40 and 50, which also suggests a range-bound action but with a negative bias.

The rebound in Bitcoin SV (BSV) hit a wall at the 20-day EMA ($180), which is a negative sign. The 20-day EMA is sloping down gradually and the RSI is in the negative territory, suggesting advantage to the bears.

If the bears can sink the price below the support at $170, the sixth-ranked cryptocurrency on CoinMarketCap is likely to start a new downtrend. This will be a huge negative as it can result in a decline to $146.20 and then to $110.

However, if the BSV/USD pair rebounds off $170, the bulls will make another attempt to push the price above the moving averages. If that happens, the pair is likely to remain range-bound between $170–$227.

If the seventh-ranked cryptocurrency on CoinMarketCap slips below $41.63, it can dip to the critical support at $39. This support has not been broken down convincingly since April 2, hence, the bulls are likely to mount a strong defense of this level.

The 20-day EMA ($44) has started to turn down gradually and the RSI has been struggling to climb above the 50 level, which suggests a minor advantage to the bears. This bearish view will be invalidated if the pair turns around and rises above the moving averages.

Binance Coin (BNB) has turned down from the moving averages. The bears will now try to sink the price below the immediate support zone of $15.72–$15.40. If they succeed, the altcoin is likely to turn weak in the short-term.

Below the $15.72–$15.40 support zone, the selling is likely to pick up that can drag the eighth-ranked crypto-asset on CoinMarketCap to the critical support at $13.65.

The gradually downsloping 20-day EMA ($16.50) and the failure of the RSI to cross above the 50 level suggests a slight advantage to the bears.

However, if the bears do not take advantage of this situation, the BNB/USD pair is likely to bounce off the support zone once again.

EOS again turned down from the moving averages. This suggests that the bears are aggressively defending this resistance. Repeated failure to break out of a resistance results in long liquidation by short-term traders.

That could drag the ninth-ranked cryptocurrency on CoinMarketCap to the critical support at $2.3314. As this support has not been breached convincingly since April 6, the bulls are likely to defend it aggressively once again.

However, if the selling picks up momentum and sinks the EOS/USD pair below $2.3314, a new downtrend is likely. The next key support on the downside is $2 and then $1.80.

This negative view will be invalidated if the pair turns around from the current levels or  $2.3314 and rises above the moving averages.

Although the bulls carried Cardano (ADA) above $0.085, they have not been able to sustain the breakout. This suggests that bears are aggressively defending the $0.085–$0.0901373 zone.

The 10th-ranked cryptocurrency on CoinMarketCap has again dipped back below $0.085 and the bears will now try to sink the price below the 20-day EMA ($0.079).

Crypto.com Coin (CRO) is facing selling above $0.125 levels. The sharp downturn in price today has pulled the RSI back below 70 and it has started forming a bearish divergence as suggested in the previous analysis.

If the 11th-ranked cryptocurrency on CoinMarketCap breaks down and sustains below $0.118234, it will signal weakness.

This view will be invalidated if the CRO/USD pair bounces off the 20-day EMA. In such a case, the bulls will once again attempt to resume the up move.