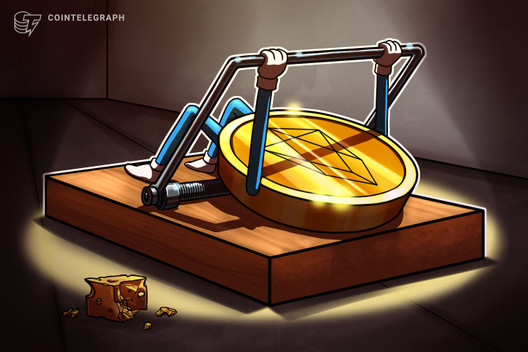 We only need to look to recent history for what this transaction means.

A wallet associated with alleged crypto Ponzi scheme PlusToken has moved 26,316,339 EOS tokens (worth over $67 million as of press time) to an anonymous crypto wallet created less than 24 hours ago. The transaction was spotted by tracking service Whale Alert earlier today.

PlusToken is believed to be one of the largest scams in the cryptocurrency history, as it reportedly held almost $3 billion worth of assets including Bitcoin (BTC), Ethereum (ETH) and EOS when it went bust in June last year.

Launched in May 2018, PlusToken acted as a crypto wallet service and investment program promising high monthly returns. It was primarily marketed in China and South Korea.

In July 2019, six Chinese nationals were arrested in Vanuatu and extradited to China as part of the investigation regarding PlusToken. At the time, PlusToken claimed that the arrested individuals were regular users and not the company’s co-founders.

Next month, PlusToken reportedly started to move its funds to exchanges in an apparent attempt to cash out.

The scam wasn’t widely discussed in the Western crypto community until August 2019, when blockchain analytics firm Ciphertrace reported on the suspicious project. According to Ciphertrace, PlusToken netted around $2.9 billion from some 3 million people.

As observed by Cointelegraph, similar movements in the past from wallets associated with PlusToken have been followed by suspected massive open market sales on cryptocurrency exchanges. In turn, this led to noticeable spikes in BTC, ETH and altcoin prices.

In November 2019, pseudonymous crypto researcher Ergo suggested that a major market selloff was possibly driven by the PlusToken scammers liquidating 200,000 BTC on the open market. Similarly, research firm Chainalysis suggested in its December 2019 report that PlusToken scammers may be using over-the-counter (OTC) off-ramps to sell BTC, driving down the price.