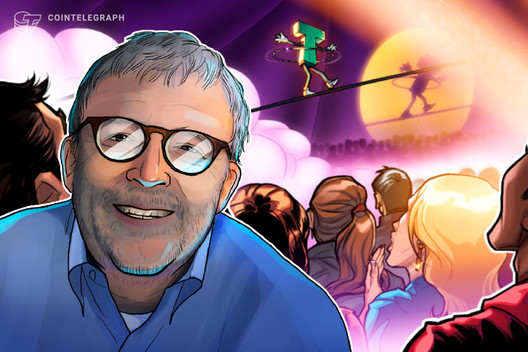 “Tether is an accident waiting to happen,” Brandt tweeted on Aug. 10, in response to a separate post looking at USDT’s market cap and the total crypto industry’s market cap in line with overall digital asset volume. “Tether is just another fiat currency,” he added, putting Tether in the same class as national currencies, such as the U.S. dollar (USD).

It is unclear whether or not Brandt feels that the asset’s risk lies in its fiat currency status, or its checkered past as a stablecoin. Cointelegraph reached out to Brandt for additional details, but received no response as of press time. This article will be updated accordingly should a response come in.

Tether has suffered the brunt of many negative comments and claims since the technology’s inception. Many such claims assert the Tether company does not have sufficient U.S. dollar backing to justify the token’s $1 USD peg.

The company has also faced a number of lawsuits and regulatory inquiries over the years, although the asset continues to thrive, holding a market cap of more than $7 billion at press time.