Peter “Bitcoin Has No Real Value” Schiff Strikes back 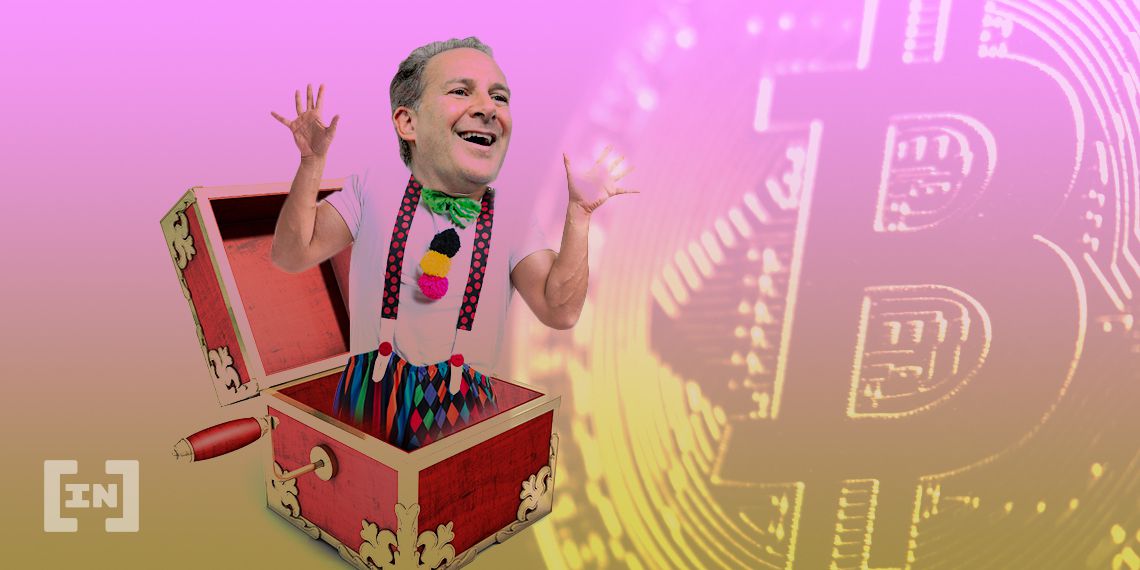 Additionally, Peter rattles on about the relationship between bitcoin and gold, the properties of sound money, and why Bitcoin should not be a store of value.

A Bit About Peter Schiff

Peter Schiff began as a stockbroker for Lehman Brothers back in the 90s. Since 1996 he’s been the CEO of Euro Pacific Capital investment fund.

He became famous after several television appearances during late 2006, where he forecasted that a financial crisis would crash the real estate market in the United States. He also published a book called “Crash Proof” in 2007, criticizing the fundamentals of American economic policies.

Schiff warned that the ongoing fiat money printing via debt would eventually spiral out of control and into hyperinflation. Thirteen years after this prediction, it still hasn’t materialized.

Although he gained popularity from his crisis forecast, his understanding of economics has been heavily criticized by other well-known economists, like Paul Krugman in October 2010:

“I keep being told that Peter Schiff has been right about everything; so, how’s that hyperinflation thing going?”

Schiff’s fund is heavily invested in gold and gold miners, so it’s not a surprise that he’s a fervent “gold bug”. He has a vested interest in supporting the price of the yellow metal and defending it from the naysayers.

Why Does Schiff Defend Gold?

Schiff praises the ‘superior’ qualities of gold as sound money. At the same time, he charges against bitcoin, displaying a worrying lack of understanding around its technical aspects.

When asked about the similarities between gold and bitcoin buyers, he exclaims:

“I do tell people that they want to try to get rich they could try gold stocks because that’s possible. I think that there’s a lot of upside potential there, but it doesn’t come without downside risk, right? It’s always a trade-off. But gold is a conservative long term store of value, I don’t think that’s how Bitcoin is being marketed.”

A Long History of Bitcoin Hate

Schiff has declared many times that he dislikes bitcoin and sees it as a purely speculative asset, similar to the tulip mania bubble.

“I think I know all of the pro-bitcoin arguments. I’ve heard them from so many people who have tried to convert me over. Because when you’re in bitcoin it’s like your religion, they want new converts… And I just haven’t been convinced.”

He was bearish about bitcoin even during 2017, showing great skepticism all throughout the lofty price valuations. His main argument against crypto is that it’s just technology and therefore can be replaced. Since bitcoin was the first on the scene, it’s logical that new cryptocurrencies will take over.

Aren’t Gold Bugs and Bitcoiners on the Same Team?

McCormack approached this tough interview recently on his podcast What Bitcoin Did #242. The host believes that bitcoiners and gold bugs are actually on the same team:

To which Schiff replied:

“You’re buying bitcoin because you don’t trust fiat currency, you’re worried about inflation and you want to own an alternative. And it’s just that you’re choosing the wrong alternative. I think that when you’re going from dollars or euros or any currency into bitcoin, you’re really just jumping from the frying pan into the fire. I don’t see bitcoin as money, as a long term store of value the way I look at gold.”

“You should also look into gold mining stock, a lot of you bitcoin guys are in bitcoin because you think its going to go up 10, 20 times. That ain’t gonna happen. But that could happen with gold mining stocks. So if you want to really, you know, go for the moon, look at the mining stocks.”

Needless to say, one of the main assets that his Euro Pacific Capital fund holds is mining companies.

This begs some questions: Is this an honest recommendation from a broker that wants the best for the average Joe? And does Schiff have any vested interest in unloading his positions on the market? 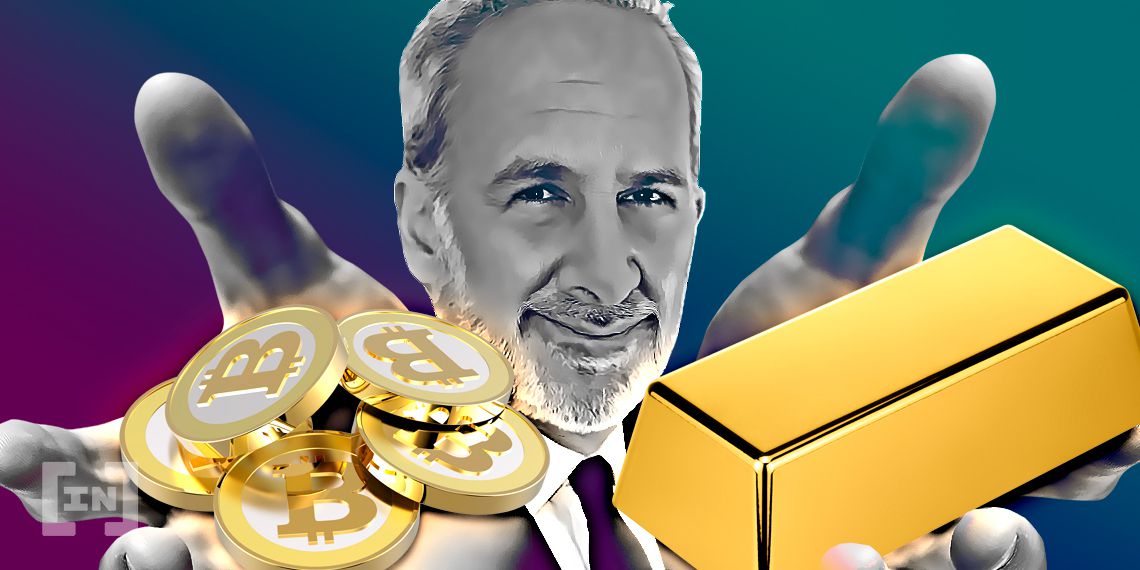 Doubts aside, at least he gives credit to McCormack about the similar motivations behind gold bugs and bitcoiners:

What If Bitcoin Was Pegged To Gold?

One of the most definitive moments of the show is when McCormack asks Schiff about a hypothetical digital cryptocurrency that was pegged to gold.

“Imagine if bitcoin was pegged to gold. Would you equally dislike it, or would you have a different view? … Is your main issue that the price is too risky, is it too volatile?”

“One of the reasons it’s so volatile is because it has no real value, it’s just a trading vehicle. But if bitcoin were actually a digital receipt for gold. If you said for example, for every bitcoin that exists, there was an ounce of gold on deposit somewhere, and bitcoin traded at the price of gold. So if gold was $1800 then one bitcoin was 1800 dollars, its value would fluctuate as the price of gold fluctuated. If gold went down 10 dollars, bitcoin would go down 10 dollars.”

Again, Schiff shows a lack of understanding about what Bitcoin really is. It’s not only a medium of exchange but also a payment network in which security comes from its size. Imagining it as a digital receipt system is just naive, to say the least.

“If you had legitimate cryptocurrency that was called bitcoin that was fully reserved and backed by gold (…) you could take your bitcoin to that depository and redeem it and get the gold. It’d be really a digital warehouse receipt for gold… Then I would support it, to the extent that you could trust the depository.”

The Best Medium Of Exchange for a Digital Future

Peter Schiff believes that gold is still a better medium of exchange in a digital world. His point is that global businesses that accept Bitcoin need to first agree on a certain amount of fiat currency. Hence Bitcoin doesn’t work as a unit of account.

When challenged by the host, he gives an example of a hypothetical global business accepting a tenth of an ounce of gold as payment, regardless of its dollar price. He seems to believe that the precious metal is better digital money than, well, actual digital money.

Schiff: “I don’t think you’ll be able to use digital make-believe money that’s backed by nothing, to buy an actual house in the real world, maybe in a game world.”

The answer is sorta like a debate between a horse breeder and an aerospace engineer arguing about how to build the fastest form of transport.

The Points That Schiff Keeps Missing

Although McCormack could have been more aggressive in his Bitcoin defense, he nevertheless calls out Schiff several times during the interview. Schiff doesn’t recognize that we’re in the middle of a digital revolution. That includes money too.

Data economies require faster transactions and high security, two aspects where a hard asset like gold completely fails. At least not without prohibitive costs for transport, storage, insurance, and security.

Governments can confiscate your precious metals, as the United States did during the Great Depression. They can even confiscate your gold if you leave the country. That obviously can’t happen with Bitcoin.

Bitcoin, Ethereum, and other digital currencies are programmable and can be employed in an array of emerging tech like smart contracts and the internet-of-things. Gold simply doesn’t compare.

On the point of scarcity, Schiff keeps re-iterating that bitcoin is man-made and therefore artificial, whereas gold is 100% natural. This supply scarcity creates a “natural floor” for gold prices, according to him. It’d be exciting to see what happens if and when asteroid mining technology opens up that “natural floor”.

Perhaps before that, however, we’ll see new precious metal reserves discovered as the ice caps retreat and great masses of land in Canada, Russia and Greenland start being mined. Deep Ocean mining will also likely rise as the costs of exploring the ocean floors drop.

Schiff’s unwavering belief of gold superiority is based on a natural scarcity that might not be as scarce as he is led to believe. He isn’t going to be swayed, of course, because in the end, Bitcoin “has no real value.”

When most of the gross domestic product of the planet becomes digitized and all of humanity finally becomes connected to the internet, perhaps he’ll finally see digital money with different eyes. By then, even gold might be a little bit less shiny.

The post Peter “Bitcoin Has No Real Value” Schiff Strikes back appeared first on BeInCrypto.