Peer Into the Crystal Ball: Will BTC Halving Echo Fate of BCH and BSV? 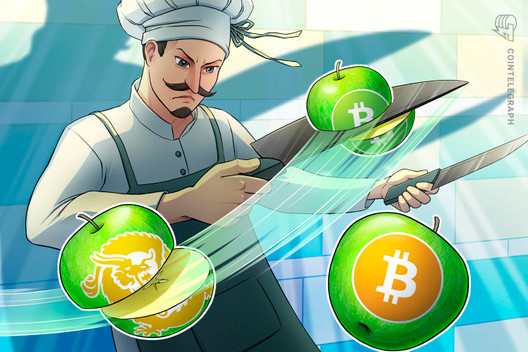 With the Bitcoin halving less than three weeks away, pundits predict the hash rate distribution to revert to the optimized pre-halving state.

With the Bitcoin (BTC) halving only weeks away, anticipation appears to be building up as Google Trends data for the event show online searches reaching an all-time high. Bitcoin’s block reward halving comes following that of Bitcoin Cash (BCH) and Bitcoin SV (BSV), where miners moved their hashing power to the BTC Chain.

Several crypto pundits point to the halving potentially having a significant impact on the BTC spot price. Indeed, Bitcoin’s two previous halvings — November 2012 and July 2016 — have each been precursors to a new, all-time price high for BTC.

However, the situation in the crypto and mainstream market in 2020 differs greatly from the two other halvings. The economic downturn occasioned by the current COVID-19 pandemic has added to stressors such as the 2018 bear market, hash wars and a litany of stricter government regulations.

Lessons from the BCH and BSV halvings

As previously reported by Cointelegraph, the BCH and BSV halvings occurred this year on April 8 and April 10, respectively, as both chains reached their 630,000 block milestones. This event triggered a 50% reduction in the block reward for miners on the two networks.

Following the halving for both Bitcoin Cash and Bitcoin SV, miners reportedly moved their computing power to the Bitcoin chain, which is still operating under the 12.5 BTC block reward regime. The miner exodus resulted in a huge hash rate decline for the BCH and BSV blockchains, while BTC’s share of the hash rate distribution among all three chains increased significantly.

The hash rate decline also temporarily left both chains susceptible to 51% attacks in which, theoretically, a rogue actor controlling more than 50% of the network could have rolled back transactions and double-spent tokens. Since the halving, data from Crypto51.app — a platform that monitors the vulnerability of proof-of-work blockchains like BCH to such attacks — has shown an increase in the theoretical cost of a 51% attack of both chains.

Despite the hash rate decline, miners with a vested interest in either chain continued to dedicate their computing power to secure the networks. Given the significantly higher profitability for miners on the BTC chain as opposed to the other two networks, some crypto pundits characterized miners’ decision to remain on BCH and BSV as “crypto socialism.”

In an email to Cointelegraph at the time, Alex Speirs, head of communication at the Bitcoin Association, countered the notion of crypto socialism and irrational mining. According to Speirs, Bitcoin creator Satoshi Nakamoto only intended for block subsidies to be a temporary reward for miners, with transaction fees being the actual long-term incentives to remain on the network.

On the price side, the halving did not trigger any meaningful upward momentum, as both BCH and BSV declined following the event. Since the halving, the BCH and BSV spot price has lost even more ground, declining by 15% and 10% respectively.

What happens to the hash rate distribution after the Bitcoin halving?

The halving events for Bitcoin Cash and Bitcoin SV saw similar trends emerging in the immediate aftermath, bringing up the question of whether both events provided an early indicator for the Bitcoin halving in May. Once the Bitcoin halving is complete, all three chains will operate on the same block reward amount — 6.25 units of their individual native currency — with mining profitability likely to once again be the major determining factor in deciding the chain chosen by miners.

Ali Beikverdi, CEO of Seoul-based crypto exchange deployment service bitHolla, thinks the reaction of miners to the Bitcoin halving will be different from the trend observed in the earlier BCH and BSV halvings. In a conversation with Cointelegraph, Beikverdi characterized both BSV and BCH as suffering from “extreme centralization,” and thus unsuitable for being used as an indicator of the likely result of the upcoming BTC halving. Criticisms over the perceived centralization of BSV and BCH are usually centered on the relatively larger block sizes of both chains in comparison to BTC.

This perceived centralization also covers the mining arena. For BCH, pools either owned or backed by heavyweights like Roger Ver and Bitmain’s Jihan Wu control the greater majority of the network’s hash rate distribution. For BSV, the situation is very similar, with pools affiliated to Bitcoin SV proponents like self-proclaimed Bitcoin creator Craig Wright and billionaire Calvin Ayre dominating the arena.

Indeed, the block size debate has been at the heart of the hard forks that led to the creation of both Bitcoin Cash and Bitcoin SV. In theory, larger block sizes lead to more centralization, as the resources required to run nodes, such as bandwidth and disk space, could restrict a significant number of participants on the network.

The miner exodus from BSV and BCH caused the Bitcoin share of the hash rate distribution across the three chains to hover between 96% and 99%. More than a week has passed since the two halvings, and the miners are still devoting their hash power to the BTC chain. Following the Bitcoin Cash and Bitcoin SV halvings, some pundits who spoke to Cointelegraph characterized the movement of hashing power to BTC as only a temporary trend that would revert itself once Bitcoin’s own block reward reduced by 50%.

According to Sonny Meraban, CEO of Bitcoin of America — a Bitcoin ATM operator and United States-licensed crypto exchange — the hash rate distribution will revert to the established pre-halving paradigm. In a conversation with Cointelegraph, Meraban opined:

“There’ll likely be a rebalance back towards where we stood pre-halving (which was about 3% for BCH and BSV, 94% for BTC), maybe slightly up for the smaller coins short-term but not much more than that. Hash rate balances were fairly optimized towards profitability pre-halvings, and the nature of the halvings means that they should be back in that same balance after it.”

The upcoming Bitcoin halving also presents a new challenge for miners, as energy efficiency is likely to be a major focus for market participants. With the block reward dropping from 12.5 BTC to 6.25 BTC, Bitcoin miners will be looking to deploy hardware solutions with a significantly lower watt per terahash ratio.

The W/T ratio refers to the amount of electricity required by a Bitcoin mining machine to complete one terahash of computing on the network. Within the crypto mining market, this ratio is a measure of the efficiency of a cryptocurrency mining machine.

Already, Chinese BTC miners such as Bitmain and MicroBT are reportedly set to deploy new mining hardware with lower W/T ratios, which means greater efficiency. Market rivals are looking to leverage improvements in chipset technology to deliver configurations that ensure gross profit margins do not decline due to the reduced block reward subsidy scheme brought on by the halving.

At the intersection of lower block rewards and newer hardware, smaller miners could find their ability to compete coming under increasing threat. Beikverdi highlighted the coming struggles for some BTC miners, stating that the halving will squeeze out some miners, as “the life cycle of Bitcoin miners always gets a huge shock after each halving but tends to take time as miners slowly unpack their operations.” For the bitHolla CEO, the departure of these smaller capacity miners will not happen overnight. He added:

“It is important to note that miners don’t have a quick way to unwind their business operations and generally have to follow their energy contracts. This means it could take 6–12 months for miners to finish the energy contracts that they have. It isn’t like a normal operation where you pay month-by-month. Mining is typically longer 6 to 12 months business cycles which takes time for weaker miners to fold.”

The current price struggles in the oil market could also play a role in the destinies of Bitcoin miners. In recent times, a key business relationship appears to have emerged between miners and energy producers, with the former becoming a “buyer of last resort” for the latter.

Taking upstream oil companies as an example, amid measures to curb gas flaring due to environmental considerations, some Bitcoin mining firms in North America have used the excess gas from these oil wells to power their data centers. On April 20, 2020, the price of West Texas Intermediate crude futures fell below $0. Should the price of the futures on other crude grades take a beating, wells could shut down in several locations, impacting the activity of some Bitcoin miners.

However, with China accounting for the greater majority of the Bitcoin hash rate, a price crash in the oil market might do little to affect the operations of BTC miners. While more than 71% of China’s electricity is generated from nonrenewable sources, this amount is spread among coal and natural gas, to mention a few.

Back in March, Cointelegraph reported that the Bitcoin hash rate had declined by about 45% from its 2020 peak. The reduction in the computing power expended to secure the network came at a time when the BTC spot price was still in recovery from the “Black Thursday” crash that saw Bitcoin briefly fall to $3,800 on March 12, 2020.

Following the hash rate plunge, the Bitcoin network saw its mining difficulty decline by 16% — the second-largest downward difficulty adjustment. The blockchain’s mining fundamentals have improved significantly since the events of late March 2020, with the current hash rate almost erasing the earlier drop.

While miners are providing computing power to secure the network, Bitcoin holders appear to be storing up BTC in expectation of a post-halving price boom. Earlier in April, Cointelegraph reported that crypto exchanges are recording large outflows, which could indicate a pivot toward long-term holding by Bitcoin owners.

Additionally, it is possible that some U.S.-based crypto owners may have been using their COVID-19 stimulus checks to buy Bitcoin. Data from Coinbase showed a four-fold increase in crypto purchases worth $1,200, the exact sum of the stimulus payments.

For Joe DiPasquale, CEO of crypto hedge fund BitBull Capital, the upcoming halving will largely follow historical precedents in having a positive impact on the BTC spot price. In a conversation with Cointelegraph, DiPasquale remarked:

“The upcoming Bitcoin halving is likely to have a positive impact on BTC’s price in the next 12 to 18 months. The last two halvings saw massive price appreciation in the same periods, with the first posing a 1000x gain in a year while the second taking longer, but delivering even bigger returns.”

The BitBull Capital chief, however, tempered expectations citing the tightening of crypto regulations and the emergence of central bank digital currencies, but is overall expecting some upward momentum for Bitcoin, adding that “the halving is a positive milestone for Bitcoin, especially in contrast to inflationary fiat currencies.” Meraban also offered a similarly subdued forecast for the Bitcoin price performance after the May halving, stating:

“BTC should experience tremendous growth over the next 12–18 months, but it will be perhaps slower than people might tend to expect; we actually saw that already in 2016, but it could easily be even slower this time. Cryptocurrencies are retail-driven markets more than anything else, and there’s just too many uncertainties as of yet over what the implications in retail demand in both Western and Asian markets for cryptocurrencies will be with regards to the current global climate.”

Since falling to $3,800 in mid-March, the top-ranked crypto by market capitalization has been unable to regain its 2020 starting price of $7,200. Bitcoin has seen over half a dozen rejections between the $7,100 and $7,500 resistance levels with each attempt causing a drawdown back to the $6,800 price mark.