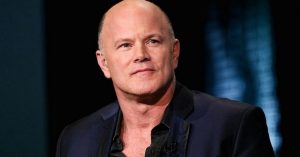 At block #630,000 the block reward of mining a block on the Bitcoin network reduced from 12.5 BTC to 6.25 BTC completing its third successful halving. The ‘halvening” event as it’s known in the crypto circles brought about a frenzy of bullish sentiments in the field including legendary hedge fund manager Paul Tudor Jones and famous Bitcoin perma-bull, Mike Novogratz, who spoke to CNN on Tuesday.

Bitcoin’s set supply cuts every 210,000 blocks are “all about the selling pressure” according to Mike. With miners having fewer coins to sell in the market (assuming miners do sell all their BTC) the supply will reduce as well.

In light of the recent expansionary monetary policies set in place by governments across the world due to the COVID-19 pandemic, BTC offers uncorrelated and safer options during these times. Describing the current halving as a polar opposite to the governments and the Fed’s quantitative easing (QE) policies.

“We have QE on top of QE and not just here in the U.S. but globally. You’ve got this exclamation point on the story of what a scarce asset does and what a monetary system with scarcity looks like in contrast to what the Fed is doing,” he said. “On the flip side, the halving is really quantitative tightening.”

The increasing monetary easing policy has turned up a gear as the U.S. government kicks off buying electronically traded funds (ETFs) for the first time ever in a bid to keep the markets alive. The global money printing and quantitative easing make a case for the top cryptocurrency given its sound monetary policy.

Paul Tudor Jones, a billionaire hedge fund manager – worth over $5.3 billion – recently revealed that he puts 1 to 2 percent of his assets in BTC as a diversification asset.  Novogratz says the current challenges in the monetary system presents an opportune time for investors to hold Bitcoin as a safe haven in part of their portfolio.

“It’s perfect timing for a macro story that people are thinking that I should have about 1 to 2 percent of my portfolio in Bitcoin. Because the possibility that things go really poorly with the fiat monetary system is rising.”