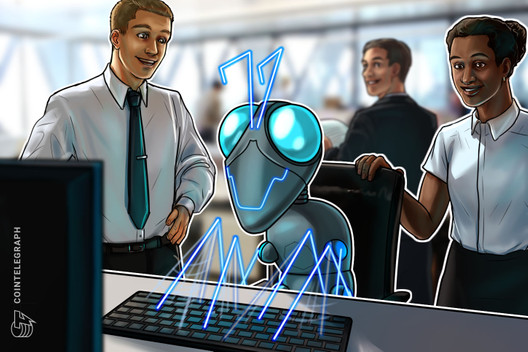 Blockchain technology is transitioning from a conceptual tool that powered the ICO boom into a value-adding service for mainstream industries.

Blockchain technology has proliferated in a number of industries outside of the cryptocurrency space in the decade since Bitcoin’s (BTC) inception. The underlying technology of the preeminent cryptocurrency went under the radar in the early years of cryptocurrency adoption before projects such as Ethereum began to explore the range of possibilities of blockchain networks.

While many startups looked to harness blockchain technology to power new cryptocurrencies, a number of mainstream technology firms began building their own enterprise blockchain systems that could be rolled out. IBM and Microsoft are giants in the information technology space and have led the development of many digital tools that are used around the world. Both firms have gone on to develop their own blockchain platforms that are built to scale in order to service everything from small businesses to global corporations.

The latest global blockchain survey from auditing giant Deloitte has revealed that an increasingly larger number of those that respond to its annual deep dive into the industry are actively developing blockchain projects. The research indicates that there was a 16% increase from last year’s figures, which are based on a survey of senior executives and practitioners across 14 countries to ascertain if they had already implemented blockchain services or projects in their respective organizations.

An interesting takeaway was the constantly increasing percentage of respondents that believe blockchain technology will be a critical part of their businesses and a significant priority in their planning. The report gives a broad overview of the current attitudes while providing a good sense-check of the potential for blockchain technology to be more widely used.

John Wu, the president of AVA Labs, told Cointelegraph that the Deloitte report confirms a growing body of research that highlights the increasing adoption of blockchain and digital assets. Wu stressed that companies that are more proactive in exploring the technology could stand to gain a lot more in the coming years:

“Institutions and individuals need to be best equipped to manage financial risks, protect investments, and even grow our assets when the next crisis hits. Widespread adoption of blockchain technology is a significant stepping stone in building a new system robust enough to cope with the challenges that lie ahead, and will reward innovators that take action today. This dramatic and rapid evolution of market structure toward decentralization is rapidly leaving the ‘ifs,’ and becoming a ‘when.’”

The Linux Foundation launched Hyperledger Fabric in 2015 and has since collaborated with a number of leading technology companies such as IBM and Intel. Hyperledger allows developers to build various blockchain applications and networks that can be molded and scaled to specific use cases and needs.

Marta Piekarska-Geater, the director of ecosystem for Hyperledger, seemed to echo the findings of the Deloitte report, explaining that there is a steady growth in interest toward blockchain systems. There seems to have been a clear path from conceptual ideas to working projects over the past few years, as Piekarska-Geater stated: “There had been a steep adoption curve especially over the last two years.” She added that “it took some time for the use cases to solidify, but production systems are now supporting critical business transactions around the world.”

Proponents of blockchain have long hailed the endless possibilities of the technology and the ability to apply the infrastructure to manage and solve a variety of problems across different industries. Piekarska-Geater told Cointelegraph that these sentiments ring true and that the sheer variety of applications of blockchain add weight to that perception:

“Companies and organizations are turning to blockchain to trace assets and products, trigger and track transactions and create a layer of trust between parties that don’t necessarily trust each other. Blockchain has been proven valuable for a range of use cases including cross-industry collaboration and consortiums, provenance tracking, managing digital identities in new ways that actually increase privacy and enabling new models for digital financial transactions.”

The broad applications of blockchain make it difficult to pin down a specific industry that is particularly interested in using the technology. Hyperledger technologies appear to be used across various industries, from healthcare and manufacturing to retail and mining. Nevertheless, two key characteristics providing value are interoperability and governance.

As blockchain technology shifts from proofs-of-concept and pilots to working solutions, various industries are beginning to see the actual value of adopting new systems. Deloitte’s “2020 Global Blockchain Survey” also shows that some respondents feel blockchain has at times been overhyped. This was evident in Bitcoin’s meteoric surge in value in 2017 and the sheer amount of initial coin offerings and blockchain-based projects launched during that time.

Things have changed over the past two years, and there seems to be more maturity across the ecosystem. It’s a point that Piekarska-Geater raises, which is backed up by measurable business impact:

“We managed to go past the ‘blockchain will sell anything’ and now the industry asks ‘what is the ROI?’ It is not enough to just stick a DLT into your solution to sell your product. And this is a good thing. Initially, the main driver of interest in blockchain solutions was the fact it sold well. Now it is more about the actual business value they bring: the accountability.”

The pertinent question is whether blockchain technology is creating real value and performance improvements in the technology and financial sectors. This will inevitably be the clincher for companies looking at adopting new solutions, and Piekarska-Geater says that perception is changing: “Using blockchain means savings in terms of cost, increasing the availability of information and trust. All industries are past the hype and looking at implementing DLTs to really improve their products,” adding that the focus has also changed significantly: “Companies move from advertising as ‘blockchain’ companies to just talking about their solution.”

What will drive adoption?

As blockchain moves into a space where working solutions are a reality to companies, the adoption of the technology is the next logical step. Nevertheless, there are still various obstacles that will slow down the gradual uptake of blockchain technology by various industries. Piekarska-Geater highlighted a couple of sticking points that need to be addressed in the short term:

“Interoperability is definitely on top of everyone’s minds. Another aspect is the limited number of skilled developers. […] With time, we will see more and more students graduating from universities that will be able to join the workforce.”