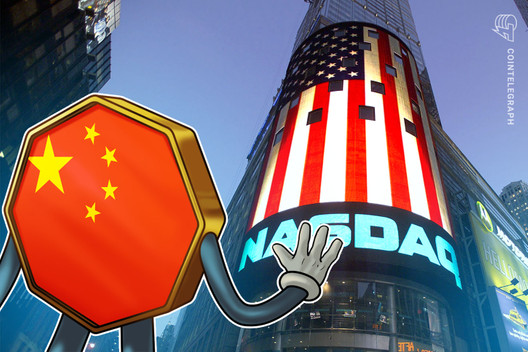 Some Chinese companies could be left out of the world’s second-largest stock exchange as a result of proposed changes — and crypto is no exception.

Chinese IPO seekers tend to lack accounting transparency and have “close ties to powerful insiders,” Reuters’ sources claim, which is why the new rules will reportedly set out a minimum value on the size of IPOs for the first time on Nasdaq.

Specifically, the exchange might require companies “from some countries, including China,” to raise at least $25 million in their offering or, alternatively, at least a quarter of their post-listing market capitalization. Chinese companies won’t be officially cited as the reason for the adjusted requirements, the sources clarified.

While a total of 155 Chinese firms have gone public via Nasdaq since 2000, 40 of those grossed IPOs fall short of $25 million, the data cited by Reutuers shows.

All crypto-related Chinese companies listed on Nasdaq and other U.S. stock exchanges (such as Canaan Creative and OneConnect) have surpassed that number. While the rumored and existing applicants — Bitmain and Ebang — are hoping to raise over at least $100 million, the projected changes are still expected to introduce more scrutiny for all Chinese applicants.

Specifically, the auditing firms of yet-be-listed Chinese companies will have to ensure that their international franchises comply with “global standards,” while Nasdaq will also examine the auditing of small U.S. firms that audit the accounts of Chinese IPO hopefuls, according to the sources cited by Reuters.

In November 2019, Bitcoin (BTC) mining giant Canaan Creative became the first Chinese crypto firm to go public in the United States after failing to secure an IPO in Hong Kong. After losing its biggest bank, Credit Suisse, a few days prior to the listing, Canaan raised $90 million, although it had originally intended to gain $400 million.

Around the same time, Bitmain, the Beijing-based cryptocurrency hardware producer, quietly filed a Deutsche Bank-backed application for an IPO with the United States Securities and Exchange Commission. While it is unclear how much Bitmain is looking to raise, the mining giant hoped to secure as much as $3 billion in mid-2018.

Finally, last month, major mining chip manufacturer Ebang filed for a $100 million IPO in the U.S., revealing that it plans to list on either Nasdaq Global Market or the NYSE under the ticker EBON.

Cointelegraph reached out to Canaan, Bitmain, OneConnect and Ebang, but received no response as of press time.