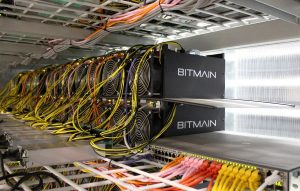 According to a press release, NASDAQ listed cryptocurrency mining firm, Riot Blockchain, purchased over 1000 Bitcoin miners from top mining hardware manufacturer, Bitmain. The total cost of the new generation S19 (110 TH) miners, expected to roll out in the first week of May, will lower the power consumption needed in mining while increasing the overall mining efficiency.

The mining company spent a total of $2.4 million from the company’s cash on hand in a bid to follow through in their recent strategic initiatives.

The adoption of application-specific integrated circuit miners (ASIC) is rapid across mining communities as miners fight for the final 12.5 BTC blocks before the halving expected in about 12 days. The Antminer S19 in particular sold out minutes after coming into the market but delivery will start on May 11th. Riot blockchain expects its mining equipment to arrive in early July.

This new miner is strikingly better in energy conservation and in profitability than previous Bitmain versions and any other ASIC miners currently. As the name – Antminer S19 (110 TH) – suggests, the mining hardware will have a hash rate of 110 TH/s an energy efficiency of 29.5±% 5 joules per terahash (J/TH). Such high hash rates and efficiency has seen Riot Blockchain boost their current profit levels by almost 46%.

“Riot estimates its aggregate operating hash rate will increase by 46% to approximately 358 petahash per second (“PH/s”).”

Bitcoin Halving Will Give Rise To Large Mining Pools

“We are confident with the continued cooperation and growth they have as they further expand their operations in the mining sector.”

The halving is expected to kill off small-time miners as the big mining pools share the hash rate amongst themselves. As recently reported by Coingape, at the end of March, over 2 million Antminer S9 miners were wiped out as prices dropped to their yearly lows making BTC mining less efficient and effective.

While Riot Blockchain remains positive despite the current COVID-19 pandemic, other miners are counting days to the halving in fear. Antminer S17 miners look to survive the block reward halving as Bitcoin still trades way above the breakeven price.