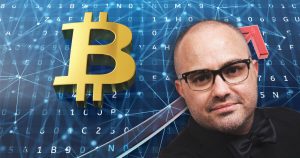 The sharp rise in Bitcoin (BTC) price seems to have awakened the bulls as one analyst tweeted out his belief in BTC’s future. Can BTC braze the fears of post halving selloffs witnessed in the past to break yearly highs?

Despite the sharp pullback in Bitcoin’s price from highs of $9,400 to current levels of $8,600, the perma bulls remain hopeful of a possible run in the near future. Bitcoin trades at $8,690 as at the time of writing representing a slight 2.2% drop in the past 24 hours but has shown its resilient qualities gaining over 130% since hitting a yearly low of $3,800 on Mar. 12.

According to a tweet sent out by Bitcoin analyst, Mati Greenspan, Bitcoin represents the best chance of investment despite the current volatility experienced in price. Mati swapped all his eToro portfolio for 100% ownership of Bitcoin. Greenspan sent out a tweet stating his belief in BTC saying,

Call it FOMO, call it blind faith, or even stupidity, IDC.

However, the community remains divided on the decision as some see it as a risky move in these pandemic times while others commend the bravery. Bitcoin’s fear and greed index also show some skepticism in investing in BTC – currently standing at 44. The sentiment is however largely shifting bullish as the extreme fear recorded at the start of April is slowly being washed away.

The market is currently saturated with buyers as seen with the skyrocketing RSI on short timeframe charts. However, price is currently well above the key support levels of $8,500, but a retest to $9,400 is necessary to continue the current uptrend.

A golden cross over of the SMA 20 and SMA 100 is also forming providing a very bullish signal for BTC/USD heading into the halving. If bulls are able to maintain the price above $8,500 support levels as at halving in two weeks, with expanding volumes, $10,000 may be on the horizon for the asset.