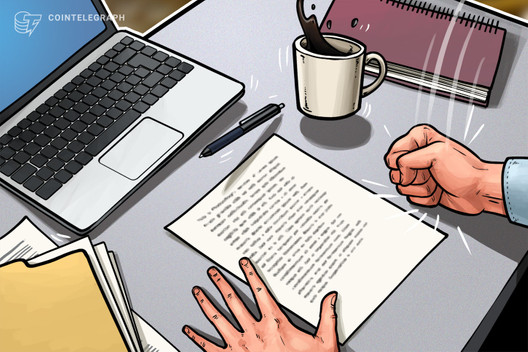 “After a detailed investigation, it is obvious the GHOST whitepaper was plagiarized extensively from an outdated 2018 PIVX whitepaper,” PIVX tweeted on May 17.

PIVX developers went on to conclude that “at least 20 of the 26 total pages” of the Ghost whitepaper “contain material directly plagiarized from the 2018 PIVX whitepaper,” attaching a number of screenshots to back their claims.

“PIVX is a MIT licensed, open-source project,” a representative for the blockchain told Cointelegraph, arguing that it can be forked “as long as copyright credits are maintained in the code.”

As PIVX spokesperson further told Cointelegraph, their main concern is “to make sure people know that they are investing in a project with a Whitepaper that is full of technical inaccuracies”. They elaborated:

“Specifications mentioned in Ghost whitepaper align with the Zerocoin Protocol, which is not only outdated, but cryptographically flawed and can be exploited. Furthermore, they seem to be unknowingly mixing the outdated Zerocoin specifications with the Sapling Protocol specifications. For example, Sapling does not use RSA-2048 accumulators and denominations at all.”

The representative for PIVX informed Cointelegraph that they weren’t considering taking legal action against Ghost, but were worried about the ethical problem:

“The ethical and legal thing to do, would be to remove it until they can replace it with their own. Assuming their project is released on GitHub, we will check to make certain that the MIT license is maintained, and that copyright notices for PIVX are kept in place. If not, we will submit a DMCA takedown notice to Github, as we have successfully done multiple times.”

A representative for Ghost told Cointelegraph that their starting code base “is a forked version of PIVX, like PIVX is a fork of DASH”, elaborating: “But we have done a lot of improvements and will continue to innovate and put out amazing products.”

The public statement published by the McAfee-backed exchange Switch echoes that sentiment, alleging that Ghost team initially considered forking DASH, but opted for PIVX because it “has made some awesome additions and their product is better”. It also confirms that “some things having to do with certain technical aspects of the project were minimally reworded, although reworded none the less.”

British-American entrepreneur John McAfee, who is currently living “in exile” due to tax-related charges from U.S. authorities, announced the Ghost project in April. In a recent interview with Cointelegraph, McAfee claimed: “I haven’t paid taxes for 10 years, and I never will.”

According to the eccentric crypto advocate, Ghost will be underpinned by a Proof-of-Stake algorithm, and will be tradable against major cryptocurrencies via atomic swaps on the McAfeeDex decentralized exchange. The anonymity token is scheduled to be released in June.