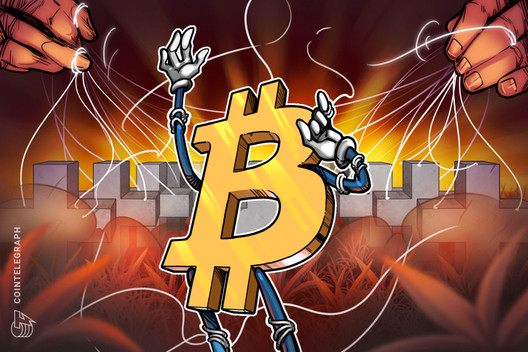 The centralized financial system has compromised itself several times during the last two decades alone, and now it’s time for a serious change!

Did you notice the song that Christian Bale’s character was jamming out to in his office when his partner came in to pull the money in The Big Short? Well, it happens to be my favorite metal band of all time: Metallica. And that song is called “Master of Puppets.” It’s almost ironic that as I was writing this article on the real truth behind what’s currently happening with the collapse of our financial and economic markets and calling it “Master of Puppets” — well, this movie scene popped in my mind.

Yes, The Big Short is about the big 2008 financial crisis caused mainly by none other than the United States Federal Reserve. Spoiler alert! This will be one of the last times you read about any type of “correlation” here in this article.

Master of Puppets is Metallica’s third album, released in 1986, and it is probably the greatest metal album of all time. I still listen to it almost weekly. It’s great for working out or getting pumped up before a business meeting.

Anyways, back to the master. The curtain has been removed and the truth revealed: money is created out of thin air, and the banks and Wall Street are bathing in it.

To be very clear, there was a major and historical financial crisis by orders of magnitude already about to explode, and the COVID-19 pandemic just brought the economy to its knees a tiny bit quicker.

At a crucial intersection of events in time that couldn’t have been more bluntly shoved in your face, 16 million people in the U.S. lost their jobs (and it’s almost 36.5 million now.) And like a drunk driver recklessly running a red light at an intersection, the Dow Jones Industrial Average had the highest gains since 1938. All while the Fed was printing 4 trillion U.S. dollars out of thin air.

Where’s the correlation? Whoever can find it will prove reincarnation exists, as they must be J. P. Morgan himself, reincarnated in the flesh — only 100 years even more crafty and conniving. And the government and the Federal Reserve say Bitcoin (BTC) is backed by thin air?

Our economy and the Federal Reserve is built on sticks (debt), and remember what happened to that little piggy that didn’t use bricks? Let’s hope the strings become severed from the puppet master and like a bungee cord slap back into its face with the inertia and momentum of more than 150 years of control, lies and manipulation.

The amount of truth that’s starting to become available and acknowledged by the general public about our governments and financial institutions is alarming, and hopefully this will be a stepping point into a new paradigm or, what I like to say, a “new world order.”

The Fed and the government’s economic strategy is just putting an already used Band-Aid (quantitative easing and debt monetization) on a gunshot wound. It’s not fixing the real problem. And for obvious reasons.

The U.S. has for years substantially spent trillions of dollars more than it brings in. To date, the debt owed by the federal government is over $25 trillion. Even more unfathomable to see, with some very complicated calculations, is that it’s looking like an estimated, or near, amount of $100 trillion will need to be printed (out of thin air), or what the Fed likes to call “increase the monetary base,” in order to bail out and keep institutions afloat.

This would then create the ripple effect of causing global economies to reach hyperinflation such as has been never seen before. That’s called a lose-lose (or no-win) situation caused by none other than our government, the banking system, Wall Street and their combined mismanagement of our economies.

Understanding economics and monetary policies can be complicated for many, even myself, but it’s not complicated enough where I will not speak up and just sit here as the blind sheep being led by the wolf in sheep’s clothing to my bitter end.

To clarify, as it’s important: Bitcoin will never be a replacement for a nation’s central bank currency or new digital currency that’s in development now. It’s more the digital gold of the 21st century and onward.

But most importantly, and much like the U.S. fighting for its freedom and control from an unfair controlling centralized system such as England, it was the first to step in thousands of years of oppression to launch a revolution.

Like Joan of Arc or Che Guevara, who became martyrs for the better of society, Bitcoin itself has taken the beating from its first inception — including being declared a national security issue — but it was so powerful in igniting a revolution that it withstood all the hardships and persecution that the governments and central banks cast upon it. So, what it serves to be is the Medal of Honor for this new paradigm shift of the people’s money, leading the future of money with a more transparent, fair and peer-to-peer monetary system.

The more we talk about this, the more people may eventually get it — I hope. The general public should really try to understand this. It’s all credits and debts and leveraged positions and margins.

Remember that incredible luncheon scene in The Wolf of Wall Street where Matthew McConaughey’s super Wall Street broker character educates a young and hungry rookie broker, played by Leonardo DiCaprio, breaking down how the real system works? Matthew McConaughey, with a straight face and twist of sarcasm, says, “Fugayzi, fugazi. It’s a wazzy, it’s a woozy. It’s fairy dust. It doesn’t exist. It’s never landed. It is no matter. It’s not on the elemental chart. It’s not f—— real.”

Just so you know: This system doesn’t just apply to brokering trades on the stock market. It applies to all the banking, monetary and financial systems around the world.

Blockchain-based new money is the P2P, fair and transparent people’s-money.

That’s exactly right. Thank you, Martin Scorsese and your screenwriters, for this brilliantly creative scene. Yet it’s fair to say that this part of the scene was definitely outshined by the more memorable “rookie numbers” part.

But as history has continuously proven to us, unfortunately, much of the population takes comfort in the machine (the “master”), no matter the consequences. As some say, “Ignorance is bliss.”

Maybe they were so caught up in the genius writing and humor from Scorsese and these two brilliant actors that they missed it. I know I almost fell out of my chair laughing.

So, as the banker artistically creates his leveraged position out of thin air, like abstract images flow out of the tip of Dali’s paintbrush — or Scorsese’s brain to film — I ask you: Does art imitate life, or does life imitate art?

Finally, the cat is out of the bag, though unfortunately only hindsight is 20/20, and time will tell what changes actually occur after this mess. Hopefully it’s different this time.

As says the famous “possible quote” of Henry Ford (most people don’t know the real facts behind that quote) that was paraphrased by congressperson Charles Binderup on March 19, 1937, in the House of Representatives:

“It is perhaps well enough that the people of the nation do not know or understand our banking and monetary system, for if they did I believe there would be a revolution before tomorrow morning.”

Want to know how the banking system really works? Here it goes:

You don’t deposit cash at a bank. You actually just lend it to the bank, and when you go to draw on that account, you are just creating a transaction inputted on a digital ledger. You are not actually drawing out your original money. The banks then charge you fees to actually lend them money as well in the form of monthly account fees, overdraft fees and all the other small print fees that sneak in.

When the bank deposits money in your account in the form of a credit — for instance, if you buy a house — it’s not an actual credit, it’s really a debt that it repackages and calls a mortgage by leveraging its position and creating a profit margin for the services of lending you part of your own money back that you originally gave it, as well as all its other customers’ money. There is only one form of real money in this transaction, and that is the money that you originally gave the bank. It’s basically holding a lien over you and on your new house with the money you and its other customers let it borrow, which it turned around and let you borrow again and charged fees on it. All it did was “artistically” create a leveraged position and profit margin by creating a credit and debt out of thin air.

The stark reality is that there really is no money. This centralized system is just conjured up credit, debt and margin entries on a centralized ledger that’s agreed upon (consensus) by a centralized group of participants.

J. D. Salbego is the CEO of Legion Ventures. He is a global leader in blockchain and digital securities with a history of working with industry-leading startups, crypto funds, institutions and governments to drive blockchain innovation, STOs/ICOs, crypto capital markets, international expansion, digital asset fund strategy and go-to-market frameworks. His work has been featured in Forbes, Business Insider and Yahoo. As a market influencer, a speaker, a published author and an internationally recognized subject matter expert, Salbego is frequently invited to speak at leading conferences such as the World Economic Forum, BlockShow and Delta Summit.