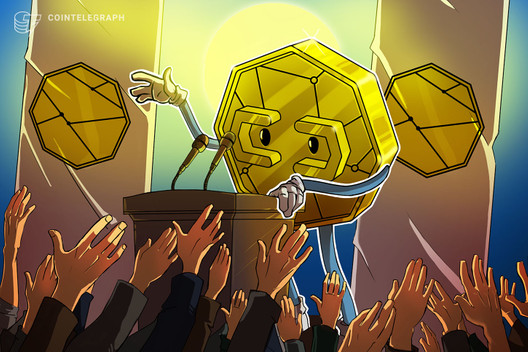 A massive yield farming strategy finally provides a mechanism to push the DAI price down.

A new vault launched on yearn.finance is being credited for finally restoring the peg of Dai (DAI), the algorithmic stablecoin of the MakerDAO (MKR) project.

As Cointelegraph previously reported, Maker had struggled with maintaining a strict $1 peg for DAI since the start of the yield farming wars in June.

Though it’s had ups and downs, the price of DAI consistently hovered around $1.02 in the past 30 days. As of press time, the price came down to $1.

The community is crediting the yearn.finance project, which launched a new yield farming strategy that relies on minting DAI to farm the Curve token, CRV. The yETH vault, which executes this strategy, quickly rose in popularity and created 10% of DAI’s current circulating supply.

The reason for that appears to be the high yield of the strategy, amounting to 93% yearly interest rate as of press time. In essence, the vault takes Ether (ETH), uses it to mint DAI, then sends that DAI to the Curve yCRV pool, a mixed stablecoin pool composed of DAI, USD Coin (USDC), TrueUSD (TUSD) and Tether (USDT).

That entitles the vault to both the trading fees obtained from other users swapping their stablecoins to one another, and any CRV tokens airdropped to this pool. Their combination is what produces the 93% yield — high by traditional standards but quite low compared to some other yield farming schemes.

The vault manages the positions automatically. Periodically, it will withdraw and sell the CRV tokens it obtained for ETH and put them back into the vault to compound the gains. Crucially, it also manages the liquidation ratio on Maker, since there is a risk of Ether’s price collapsing.

The vault targets a 200% collateralization ratio to ensure that the users’ assets are not liquidated. Liquidations carry a 13% penalty, which could quickly erase all gains from this complex strategy. It is worth noting that even without being liquidated, users remain exposed to ETH’s price fluctuations — both up and down.

Using yearn.finance to farm the CRV token carries certain advantages for its users, namely saving on gas fees. Since the protocol aggregates everyone’s assets, it pays a lower cumulative fee than if everyone did it separately. For the less savvy users, it also completely automates the process, though there is a protocol fee on performance. The downside is technical risk, as unforeseen bugs in any of the smart contracts involved could lead to loss of user funds.

For Maker, the vault’s activity helps stabilize the DAI peg. The strategy requires selling the DAI into the other three constituents of the yCRV pool, which provides downward pressure on its price. This is a notable change from Compound’s yield farming mechanics.

As Cointelegraph reported previously, Compound is the largest single destination for newly minted DAI. However, users do not need to sell the DAI in order to earn COMP, thus not contributing to selling pressure at all. With 10% of all DAI being minted by the yETH vault, the selling pressure it provides is significant.

However, Maker’s token holders are not directly benefiting from this influx of new funds. The community had decided to slash interest rates to zero for nearly all collateral assets, so even though the peg is restored for now, the Maker protocol is not receiving revenue for that.