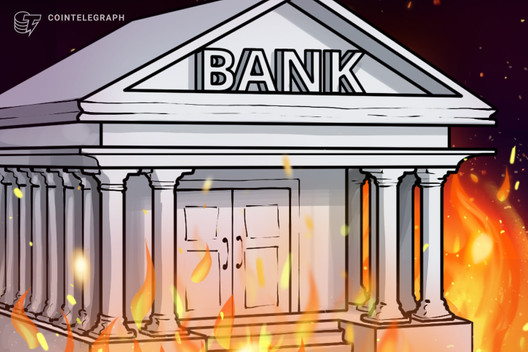 Protesters in Lebanon have set fire to the central bank in Tripoli in a show of anger with the country’s deepening economic crises and stagnant political orthodoxy.

Joyce Karam of United Arab Emirates-based media outlet TheNational reported June 11 that the Lebanese pound (LBP) is trading for more than 5,000 per $1 in spite of the country’s official peg of 1,507 per dollar— a 20% depreciation since April, and over 230% since the peg was respected in January.

However, recent reports also indicate that an increasing number of protestors are embracing Bitcoin (BTC) as a means of bypassing Lebanon’s failing monetary system.

On June 12, Reuters reported that Lebanon’s central bank will begin injecting funds into its currency market in a bid to stem the rapid depreciation that has escalated tensions and local unrest.

The report notes some currency dealers have already responded to the central bank’s move, lowering prices down to roughly 4,500 pounds per dollar. Government officials have also pledged to take action intended to reduce its value by to roughly 3,000 pounds per $1.

However, recent attempts by politicians to quell the country’s deepening economic crisis have been largely unsuccessful, with protestors having erupted into multiple demonstrations targeting banks with rocks and fire in recent months while Lebanese officials racked up record debts.

Amid the turmoil, an increasing number of Lebanese citizens are turning to Bitcoin and cryptocurrency, with Nikkei Asian Review reporting that digital assets are “being embraced as an alternative to dollar assets” among the country’s protesters.

However, confusion surrounding the value of Lebanese fiat has led to erratic prices being listed on peer-to-peer Bitcoin marketplace Localbitcoins — with current buy listings ranging from 19 million LBP to 57 million LBP per BTC, while sell offers range from 12.5 million to 40 million.

Bitcoin is increasingly gaining popularity as an alternative store of value in country’s facing violent hyperinflation, with Venezuela long comprising a leading market by volume on Localbitcoins.