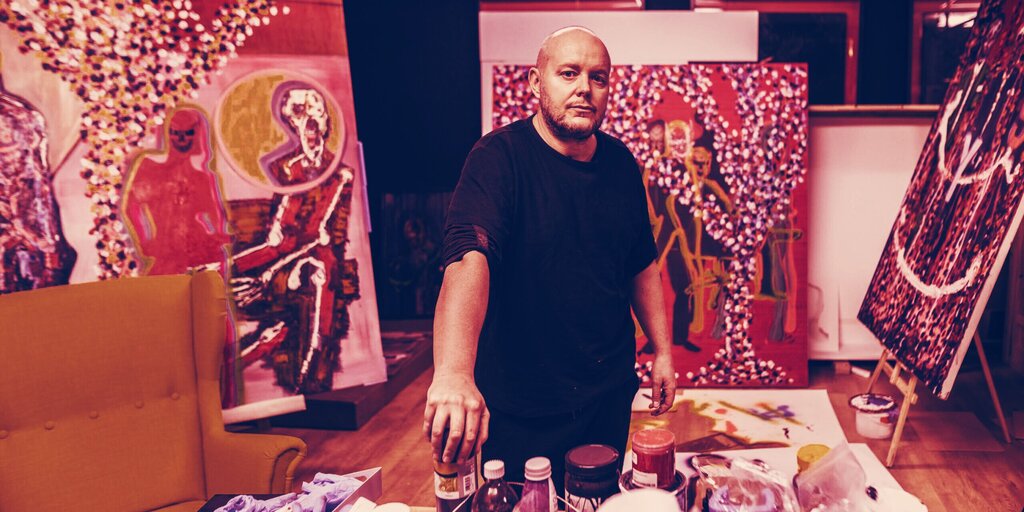 British contemporary artist Lincoln Townley has launched a new space-themed collection. And he’s aiming it at one demographic in particular: cryptocurrency investors.

The London-born figurative artist is perhaps best known for his celebrity commissions. His repertoire includes surrealist portrayals of Michael Cain, Charlie Sheen and Al Pacino—often depicted as slightly distorted caricatures reminiscent of his other signature abstracts.

Townley’s new collection, dubbed “Universe,” centres on the cosmos. A vivid interstellar probe into extraterrestrial life, the works will feature paintings of bankers on Venus and discos on Mars. But while Towley’s collection won’t portray Bitcoin on the moon—a common crypto colloquialism—he’s more than willing to sell his art for Bitcoin.

Much like space itself, Townley’s intention is to continually expand his demographic. The new collection is held virtually on his studio website—extending art aficionados around the globe the option to buy his works. Going virtual also means Townley can accept virtual currencies, such as Bitcoin.

The Universe collection will be shown in a private viewing at the Saatchi Gallery, London, September 8 through to 13, 2020.

“We are connected to many investors who look at cryptocurrency as their number one choice when venturing into securing asset-backed investments such as contemporary art. Townley explained. “The favourite is Bitcoin but our set up at the studio with Kraken and Binance give us scope to deal in so many more coins it makes the market a no brainer for us and our collectors.”

Digital art gets big boost from the Winklevoss twins

As two of the most prominent cryptocurrency exchanges in the sector, Binance and Kraken are well-stocked with a wide variety of cryptocurrencies.

Townley took his maiden voyage into the sector in 2017, where his painting, “Homage to Francis Bacon” went under the hammer for 40 Bitcoin—worth $520,000 at the time. Since then, Townley has been somewhat of an enthusiast.

“Cryptocurrency is solid and many coins haven’t even begun to show what they’re capable of and my art studio is happy to talk to them all and discuss deals on my works globally,” he said.

Crypto is becoming a popular method of buying art. Earlier this month a Picasso was sold for a cryptocurrency. The question is, which one will appreciate faster?