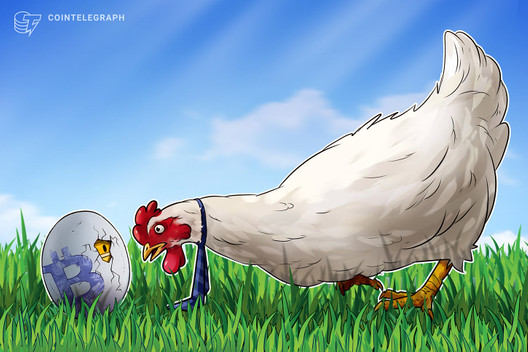 As institutions flock to crypto, here are the fundamental metrics that can be used to track their interest.

The growth of the crypto derivatives market in 2020 has been a story of its own, mainly driven by Bitcoin (BTC) and Ether (ETH) options traded on exchanges such as the Chicago Mercantile Exchange, Deribit, OKEx, Binance and Houbi.

Record Bitcoin options volumes are indicative of an increasing institutional interest in crypto, but there are better quantitative and qualitative indicators to use, such as open interest, Bitcoin’s price, frequency of block trades, institutional Know Your Customer processes and others.

Compared with traditional derivatives, the proportion of institutional investors in the entire pool is still small, but it is clear that the definitive rise in interest is driven by financial instruments such as options and futures. Options are not a panacea but rather a stage in the development of an asset, and as is evident, Bitcoin and Ether have both reached that point in their evolutions. Speaking to Cointelegraph, Luuk Strijers, chief commercial officer of crypto derivatives exchange Deribit, echoed similar thoughts, stating that “the inflow of institutional investors money into crypto is still very nascent,” adding:

“There are however various indicators signaling the gradual adoption of crypto or BTC more specifically into institutional portfolios. Traditional finance tends to prefer traditional instruments like options and futures, volumes and open interest in those instruments are clear indicators of potential growing institutional demand.”

Volumes could be misleading

Considering only the reported volumes of Bitcoin and Ether could be misleading to investors and speculators alike, as derivatives volumes are often subject to being skewered by bots, wash trading and misreporting. A better volume indicator would be the amount of BTC moving in and out of derivatives exchanges such as Deribit. Such analytics are provided by several firms that extract insights from on-chain data.

After Bitcoin options volumes saw a 1,000% rise on CME in May, derivatives volumes dropped 35.7% in June to $393 billion. However, the total option volumes for Bitcoin options on CME once again set a new record monthly high, jumping 41% with 8,444 contracts traded. Cointelegraph confirmed this increase with a CME spokesperson who provided insight on the trending open interest of BTC options, stating: “In June, CME bitcoin options had 12 consecutive days of record OI, culminating with a record 9,858 contracts (49,290 equivalent bitcoin) on June 26.”

While increased volumes indicate rising interest in crypto from both the public and institutions that are trying to hedge against volatility and shelter assets during the COVID-19 pandemic and looming global financial crisis, open interest proves to be a better indicator of institutional interest, as it signifies buy-side interest and isn’t as flawed a metric to make this distinction as reported volumes would be. The spokesperson from CME agreed, saying: 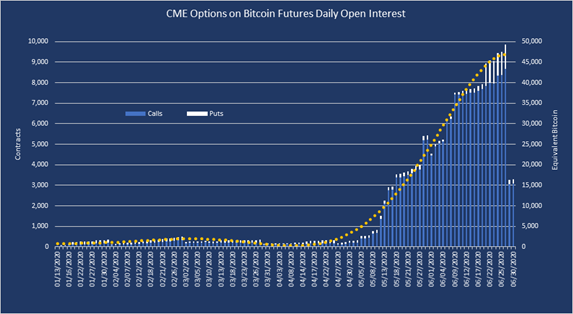 Block trades are privately negotiated futures/options contracts that meet certain quantity thresholds and are usually executed on the sidelines of the public auction market. As institutional investors and traders usually trade in higher ticket sizes, the percentage of block trades within the overall volume could also serve as an indicator of institutional interest in crypto. CME’s spokesperson further confirmed this hypothesis:

To understand more about the phenomenon of block trades among crypto-exclusive exchanges, it is important to consider Deribit, as it’s the biggest platform for these instruments. In June, the biggest quarterly expiration date yet occurred, with 115,000 contracts expiring, of which Derebit maintained 74,000. Deribit’s Strijers further elaborated on the relevance of open interest and block trades, revealing:

“Total BTC options market open interest was just below USD 2 billion, another record and confirmation of client interest in the asset class. We also see an increase in the relative number of BTC option block trades from 6–8% on average per month to almost 12% of the June 2020 volume.”

BTC’s price and its volatility

By the end of the second quarter, BTC volatility had been markedly dampened, which in itself is a lucrative sign for institutional involvement due to institutions’ preference for stability. By comparison, retail-driven markets often see wild swings. According to Jay Hao, CEO of OKEx — a Malta-based cryptocurrency exchange — stability is a sign that “Bitcoin is maturing as an asset class,” adding in a conversation with Cointelegraph:

“When institutional traders started becoming interested in BTC, volatility was a red flag that kept many away. Yet, with today’s panorama, we are seeing more volatility currently in traditional markets. This could be another reason behind the new interest from traders wanting to diversify their portfolios and finally seeing Bitcoin as a viable option for a hedge at last with a sophisticated derivatives market and options trading.”

It’s important to note that the reduced volatility of Bitcoin’s price alone is not enough to draw conclusions regarding levels of institutional involvement. John Todaro, head of research at TradeBlock — one of the largest digital currency platforms for trade executions — told Cointelegraph: “Bitcoin has had levels of dampened volatility in the past before resuming wild market swings—2018 is a good year to see this. As such, reduced volatility alone would not indicate institutional involvement.” 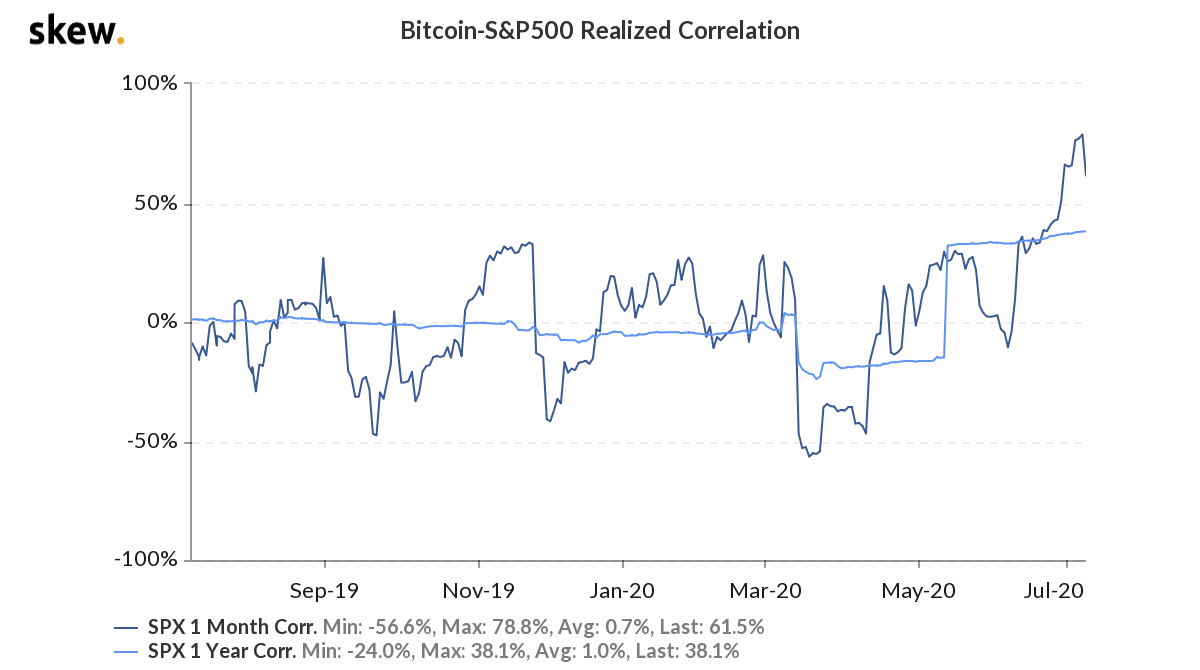 In the recent past, Bitcoin’s price has shown a correlation with the S&P 500, which can be taken as a representative index for the global equities market. Todaro further explained on what this entails for institutional interest:

“The moderate to strong correlation between equities and Bitcoin the past several months has been a good example of rising institutional interest. Large trading firms tend to push assets into directions of positive or negative correlation, which we have seen recently between Bitcoin and equities. In the past, Bitcoin has behaved very non-correlated, almost indicating a complete divorce from traditional financial markets.”

Bitcoin exchange-traded funds are derivatives products that are traded using Bitcoin as their underlying assets, either fully or partially. Once the Securities and Exchange Commission approves Bitcoin ETFs, they are expected to become huge, being a watershed moment in the life cycle of BTC as an asset class and likely boosting retail demand and penetration, as revealed by Todaro: “A Bitcoin ETF in my opinion would actually increase retail trading activity given ETFs themselves are often geared for more retail like traders as a simple exposure opportunity.”

Not only would this bring more retail investors in the fold, but it would also be an incentive for institutions to engage with an investment vehicle that they are very familiar with — with the SEC’s seal of approval easing institutional concerns about exposing their clients to unregulated markets. OKEx’s Hao elaborated on this:

“Everyone in the space has long been awaiting the approval of a Bitcoin ETF as this will certainly increase demand from institutions as they can gain exposure for their clients to bitcoin without having to own it or deal with exchanges. They can greatly diversify their holdings without exposure to many of the risks that trading and owning BTC implies.”

Giants are beginning to surface

Grayscale Bitcoin Trust has become a force to reckon with, managing record amounts of funds and with institutions comprising 88% of its investors. Beyond this, traditional players such as the Big Four accounting firms are jumping into the crypto market, and even Western Union is making a bet. This change is also traceable on platforms such as TradeBlock, as Todaro further explained: “We have seen a considerable amount of interest from new and existing institutional traders/investment firms as they scale up in the crypto space.”

Strijers confirmed that this interest is being seen in Deribit as well. While the company does track its institutional KYC metrics, it does not publicly publish that information. Strijers went on to say, “The number of corporate entities we service keeps growing month on month, as well as the variety of new requests received to specifically develop services for funds or discretionary asset managers.”

The latest news that PayPal may allow Bitcoin payments further lends credibility to the space. And with a robust and vibrant derivatives market, plus the unprecedented uncertainty in traditional markets, this interest is likely to only grow.