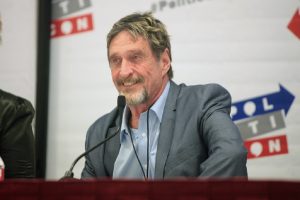 There is a controversy brewing. John McAfee, a controversial and a bold personality in the crypto scene, has admitted that he plagiarized the “open source” white paper of PIVX, another blockchain project, when drafting the content of his privacy-centric protocol, the Ghost Project.

Instead of being apologetic, John is going after PIVX, suing for reputational damage.

It must be noted that both projects are rolling out privacy-focused coins which incorporate anonymity features, and most importantly seeks to be alternatives to other mainstream projects like Monero and ZCash.

However, it appears that John, despite his entrepreneurial spirit, is taking advantage of the “open source” tag and has copied a section of PIVX’s verbatim.

This he claims is because the PIVX project describes itself as a public whose source code can be forked and used to create a better project or a side chain.

In his view, for a project to be truly open source then its documentation, in this case, the white paper, must also be availed. Otherwise, it is “fraud,” a fact which he “will demonstrate this in court.”

“PIVX is attempting to claim that their source code is Public Domain, but that the description of how it all works (The White Paper) is not! Then what f*cking good is Open Source if the documentation is not included? What scam is this?”

“Claiming a product is open source while withholding the documentation is fraud. Pure and simple. I will soon demonstrate that in the courts.”

PIVX is attempting to claim that their source code is Public Domain, but that the description of how it all works (The White Paper) is not!

Then what f*cking good is Open Source if the documentation is not included?

What scam is this?

Ghost Project Vs PIVX, Who Has Better Odds?

Ghost representatives have admitted that they used some of PIVX code but not as it is since they made a lot of improvements. On their end, PIVX noted that Ghost directly lifted outdated code and terms from 20 of their 26 page white paper.

Their issue was that the white paper is theirs and is bound by copyright which was enforced in 2018. What they need is being accredited and the Ghost project correctly attribute the sources as required under the MIT license.

Furthermore, PIVX representatives have pointed out a flaw in the Ghost white paper.

“We would also like to point out again that the GHOST white paper lists specs that align with the Zerocoin Protocol, which is not only outdated, but cryptographically flawed and can be exploited. There are also multiple technical errors and inaccuracies that should be addressed.”

@officialmcafee you are free to fork and expand on the great features we have built with PIVX (with proper attribution as required by MIT license), however the whitepaper written by @Strontiumz38 is not open source and was fully copyrighted in 2018 as can be seen on the 2nd page. pic.twitter.com/CL4dVrDLIC

It will be interesting how this pans out since Ghost and PIVX describe themselves as community-controlled with no foundation or physical addresses.