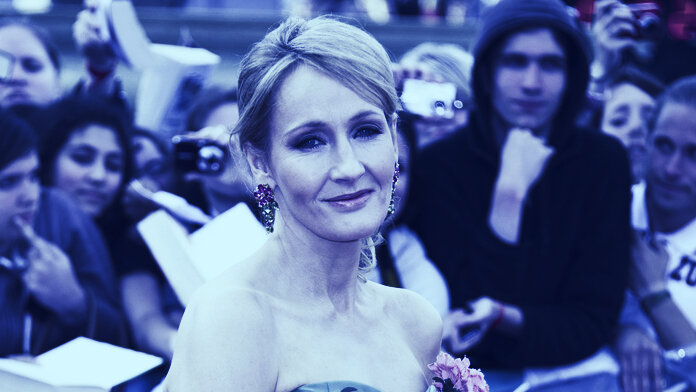 Harry Potter author JK Rowling continued to rile up Bitcoin supporters today, when she apparently revealed her allegiance to BTC’s No.1 competitor—Ethereum.

Rowling tweeted, “This is getting silly. I’m not joining the Bitcoin community. It should be perfectly obvious by now that I’ve been trolling Bitcoin in the hope of boosting my significant Ethereum holdings.*”

This is getting silly. I’m not joining the Bitcoin community. It should be perfectly obvious by now that I’ve been trolling Bitcoin in the hope of boosting my significant Ethereum holdings. * https://t.co/w9hUNOlsHb

Rowling dipped a toe into the cryptocurrency world on Friday, May 15, when she ventured to ask: “What is Bitcoin?” The barrage of replies she received did little to further her curiosity, and within days she had announced her regret at ever mentioning Bitcoin.

“3. Never be flippant about Bitcoin on Twitter,” she said today, on a list of things to avoid, adding, “On point 3: my mentions are still full of people trying to get me to buy Bitcoin or to explain it to me. It’s very kind of you, but I swear, I now feel fully educated on the subject.”

Ethereum, launched in 2015, is currently the second largest cryptocurrency in the world, with a market cap of over $23 billion. Co-founded by Vitalik Buterin, Ethereum pioneered the use of smart contracts, and is expected to undergo a major scaling upgrade in the coming months and years.

Rowling’s sudden entrance to the cryptocurrency corner of Twitter caused a lot of commotion over the weekend. Two CEOs of the largest cryptocurrency exchanges in existence were universally shamed for their perceived failure in drawing Rowling further into crypto.

At one point, Coinbase CEO Brian Armstrong replied to a fake JK Rowling account which had pretended to buy $100 worth of Bitcoin. Besides suffering the indignity of replying to a fake account—a common scam technique in crypto—the CEO was also deemed to have been too eager to shill what one onlooker called his “shitcoins.”

Rowling’s continued willingness to engage with the cryptocurrency community—albeit in a joking way—could be a sign that she’s warming to it. And now that she’s familiar with the top two cryptocurrencies, is it time for Harry Potter to become a crypto bro?